Last year's Mason Dixon Master Chef Tournament winner Fabio Mura is a busy man these days. Not only does he run the kitchen at Grille 620 and River Hill Grill, he's also in charge of food at the new Mad Chef Kitchen & Bar. Located in the same Turf Valley Town Square shopping center as Grille 620, Mad Chef Kitchen & Bar has the same casually elegant vibe as its two sister restaurants. But while the menu at Grille 620 has more of a steakhouse vibe and River Hill Grill has the elevated bar food thing perfected, the food at Mad Chef Kitchen has a bit more of an international flair. Evidence of Chef Mura's Sardinian roots peek in here and there, too.

Full disclosure: we've worked with Chef Mura in the past. He was featured in our book, Baltimore Chef's Table. That doesn't prevent us from speaking about his food honestly.

Between consulting with our waitress and the Chef, we decided on two small plates, one shared entree, and two desserts. 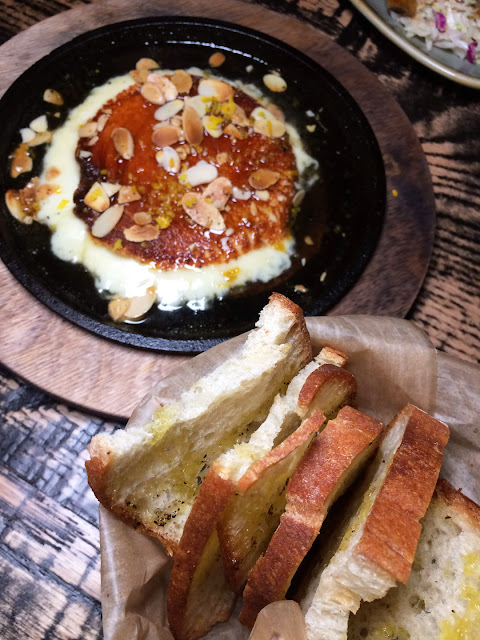 Mura drew inspiration for his Sardinian fonduta (the Italian version of fondue) from several things: a recent trip to Italy; the Sardinian honey and cheese pastries known as seadas; even fajitas. These elements became melty broiled provolone cheese drizzled with honey, citrus zest, and almonds, served on a hot cast iron plate with crispy rustic bread on the side. The flavors of the dish played well against each other, with the orange zest being an especially welcome addition. The cheese was also hot and somewhat gooey, but unlike melted mozzarella which tends to stay soft and traditional fondue which has a more liquid quality, the provolone was a little more solid and needed to be cut with a knife before manipulating it onto bread. Still, a flavorful start to the meal. I couldn't help think that this combination of ingredients would be killer on a pizza crust. 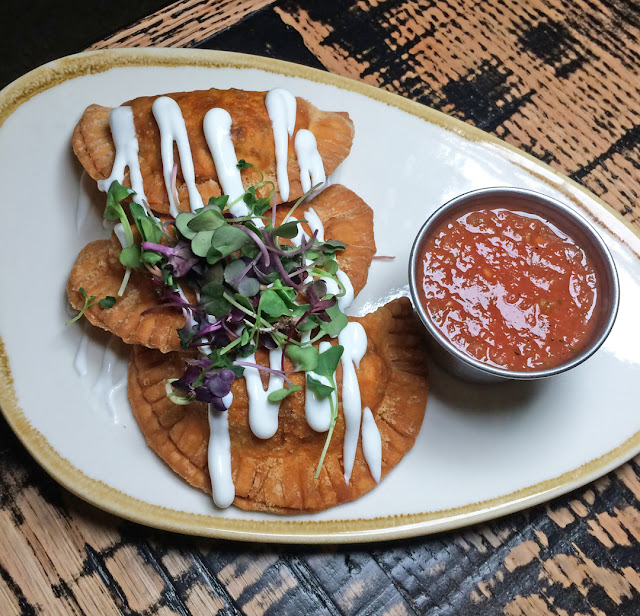 We didn't order the empanadas because we didn't want to be greedy, but Chef Mura sent them out anyway. The pastry was light, crisp, and greaseless, with a flavorful ground beef and onion filling. The accompanying salsa had a nice kick to it, but the empanadas were moist enough not to need a sauce other than their drizzle of lime crema. 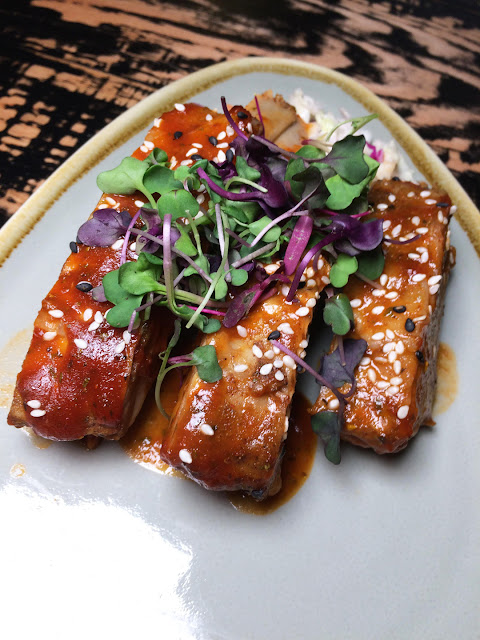 We're a sucker for lamb ribs and are happy to see them pop up on menus more and more frequently. These were billed as "Korean barbecue" but didn't strike me as being from any one particular area of Asia. The sauce was light and sweet, but not cloying. The ribs themselves were very meaty, extremely tender and easy-to-eat, with a nice lamb-y flavor. 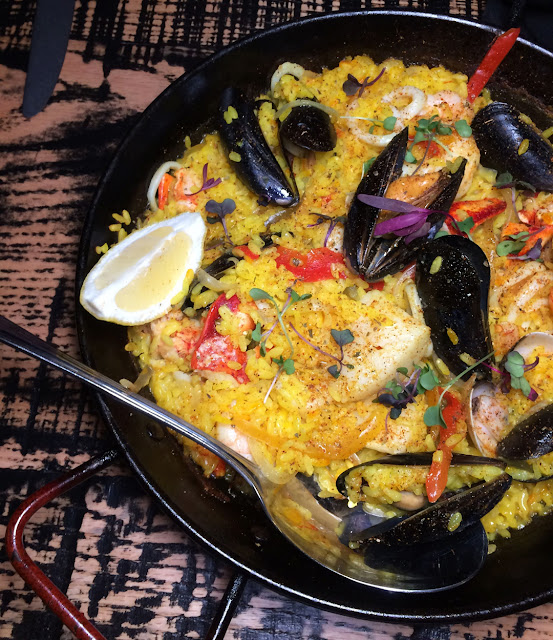 The luxurious paella for two included shrimp, mussels, clams, calamari, lobster, and sizable chunks of scallop. I've made paella at home, but it was nowhere near as good as this stuff. The short-grain Bomba rice, redolent of saffron and seafood stock, was perfectly cooked, and the various sea creatures adorning it were tender. The scallops in particular were delightful, and I did my best to bogart all of them for myself. 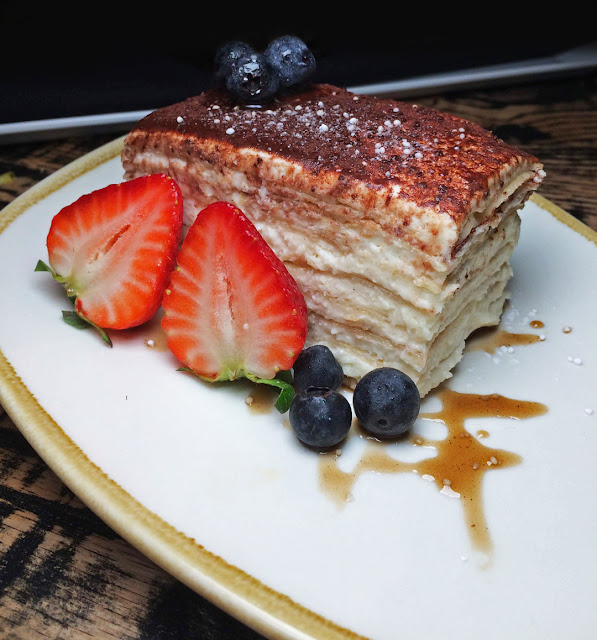 Then there was dessert. Chef Mura himself said we must order the zeppole and his tiramisu, which had "a new twist." The twist turned out to be pretty innovative; rather than coffee-soaked ladyfingers topped with a mascarpone cream, the cream was layered between crepes. The dish had all of the flavors of the original, but with a completely different texture. Pretty clever, Chef! 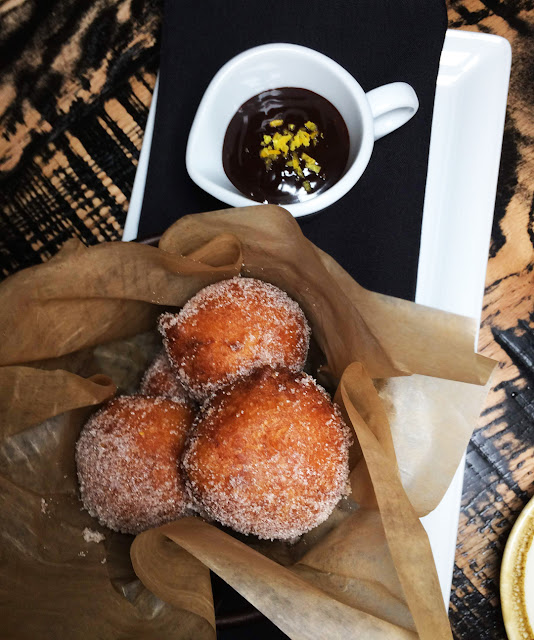 While the tiramisu was delicious, the zeppole were fan-freaking-tastic. The sugar-dusted orbs of fried dough were impossibly fluffy and moist on the inside; pretty much perfect on their own. But a drizzle of the accompanying dark chocolate hazelnut orange sauce made them absolute heaven. A must-order.

Mr Minx and I very much enjoyed our meal at Mad Chef Kitchen & Bar. The restaurant was comfortable, the staff friendly, knowledgeable, and on-the-ball, and the food was very good.

A shout out to the young man who refilled our water glasses. His reply of "my pleasure" to our "thank you" was a refreshing change from the current usual reply of "no problem." It shouldn't be a problem to serve a paying guest, and indicating that possibility could exist tends to make guests over a certain age uncomfortable.