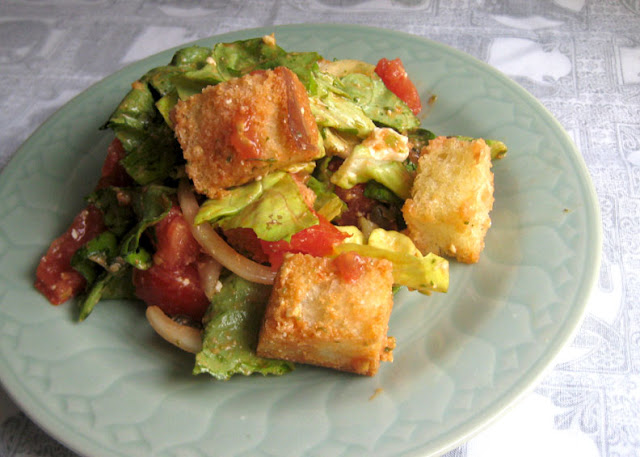 There's just something a bit...unctuous...about TV chef Nick Stellino. He's handsome, slick, and smooth, and we don't care to watch his show regularly. But once in a while, when there's nothing else on, or we've got a half hour to kill between shows, we'll tune in. Recently, he made a panzanella that inspired me to whip up a similar version for dinner. I liked that he made a creamy dressing using feta cheese and tomatoes. While we did have tomatoes (two of them, to be exact), I preferred to use them in the salad itself and put a bit of tomato paste in the dressing. It was really quite delicious, and I dare say, with a bit more cheese to thicken it up a bit, would make a nice dip for crudites or crostini.

Preheat oven to 200F. Toss bread cubes with olive oil and spread in one layer on a foil-lined baking sheet. Bake for 45 minutes to one hour, tossing occasionally, until bread is mostly dry. Allow to cool to room temperature.

When ready to eat, toss croutons with a few tablespoons of dressing. Place tomatoes, onions, salad greens, capers, feta, and croutons in a large bowl and drizzle on remaining dressing. Toss well to coat. Serves 2 as a main dish and 4 as a side.

Combine all ingredients in a mini prep or blender and puree. Refrigerate until ready to use.