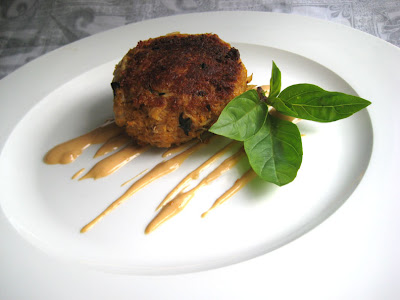 Sometimes I have a hankering for crab, and on those days, even mediocre crab will do. I have found that in the world of mediocre crab (the canned stuff that Phillips puts out, for instance), claw meat tends to have the most flavor. It's also more reasonably priced than lump. I bought a can of crab claw meat for the okonomiyaki I made a couple of weeks back, but didn't use all of it. The rest became crab cakes.

Our Thai basil was growing like gangbusters, so I thought I'd make a cake with Thai flavors: lemongrass; red curry paste; basil. I realized I should probably use a bit of breading, since claw meat tends to be on the moist side. I didn't want to use up the bit of bread earmarked for Mr Minx's lunch the next day, so grabbed the next carby thing I found - a box of corn Chex.

It worked quite well. After a long rest in the fridge, the cakes stayed together in the pan, and they formed a nice crispy crust, too.

My favorite thing about using Chex as a crust: getting out my frustrations by beating on them with a meat tenderizer.

In a large bowl, mix together mayo, red curry paste, lemongrass, and Sriracha. Fold in crab, basil, and cereal. Add salt and pepper to taste. Form into 6-8 patties. Refrigerate for several hours; overnight is best.

Heat oil in a large saute pan. Add crab cakes. Cook for 10-12 minutes, turning over once, until heated through and browned on both sides.

Warm peanut butter in a microwave safe bowl or ramekin until runny. Stir in Sriracha, lemongrass, and milk. Add enough lime juice to create a drizzle-able texture (3 tablespoons or so). Stir in scallions.