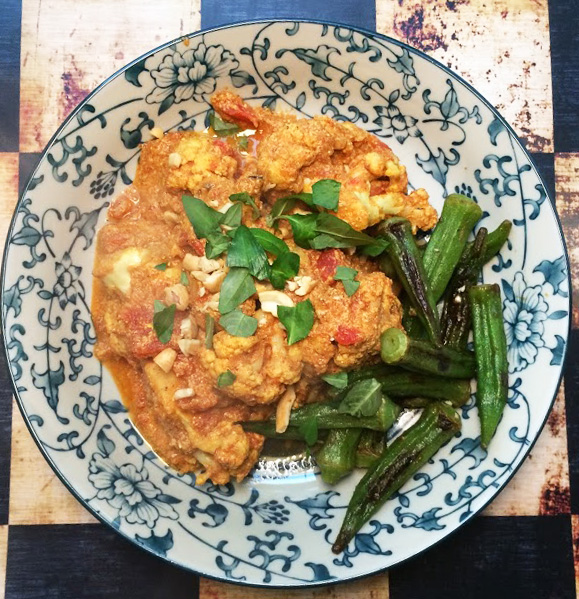 One of the dishes we sampled at the new Topside at the equally new Hotel Revival was a dish of cauliflower flavored a la Indian butter chicken. It was really good, and reminded me that cauliflower would make a fine meat substitute in a similar dish, chicken tikka masala. So rather than fuss around like the restaurant did and fry the cauliflower separately, I just made straight-up cauliflower tikka masala. I've made the chicken version before, and used heavy cream for the sauce. This time, I used whole milk yogurt, which made it extra tangy and delicious.

Combine first five ingredients in a large bowl. Remove half of the spices to a small bowl and set aside for later. Add three tablespoons of the yogurt to the spices in the large bowl and stir well to combine. Add the cauliflower florets. Using your hands, rub the marinade into the cauliflower (using a spoon won't cut it), and set the bowl aside at room temperature for at least half an hour.

Place the chopped onion, garlic, and ginger in a food processor and pulse to a paste. Heat a large skillet and add the vegetable oil. Add the onion puree and cook over medium heat, stirring regularly, until the mixture gives up its juices and is starting to look dry. Add the spice mixture and stir to combine. Add the tomato paste and continue to cook the mixture until the tomato paste has darkened and the vegetables are soft, about 4 minutes. Add the canned tomatoes with juices and bring to a boil. Reduce heat and simmer the mixture, stirring often, for 8-10 minutes.

Meanwhile, preheat your broiler. Line a rimmed baking sheet with foil and arrange cauliflower in a single layer. Broil for eight minutes, until cauliflower starts to blacken in spots. Turn the pieces over and broil for another 5-6 minutes.

When the cauliflower is almost done, add the remaining 2 tablespoons of yogurt to the sauce and stir well to combine. Toss in the cauliflower, stirring to coat it with the sauce. Turn the heat to low and cover the pan to allow the cauliflower to cook to your preferred texture (it will still be a bit crunchy when it comes out of the broiler, but that's the way I like it).

Serve with rice and cilantro garnish. A side of roasted okra is nice, too.