Bryson Keens and Rey Eugenio were once managing partner and chef partner at Roy’s Hawaiian Fusion at Harbor East some years ago. This was back in the days before there were so many restaurants to choose from in the area, and Roy’s was the place to go. The menu, featuring dishes served in all Roy’s nationwide plus some local twists, was uniformly delicious. However, it was during the restaurant’s special wine dinners that Chef Eugenio’s cuisine really shone. Coupled with the amiable Mr Keen’s turn as emcee, plus wine, those dinners were a guaranteed good time. (Except perhaps for the husband who managed to talk his wife into leaving the kids with a sitter that night, only to find the dinner featured course after course of cute animals like Mary’s little lamb, Bambi, and Donald Duck, which the wife refused to eat. Fun fun sitting across from them!) Man, I loved those dinners. All good things must come to an end, of course: Rey eventually left Roy’s to work at a new Greek restaurant that quickly topped Baltimore’s Best Restaurant list. Bryson left a few years later to open his own place: Points South Latin Kitchen, in Fells Point. Chef Eugenio was brought on as a consultant, and now he’s running the kitchen. The food, predictably, is fan-fecking-tastic. 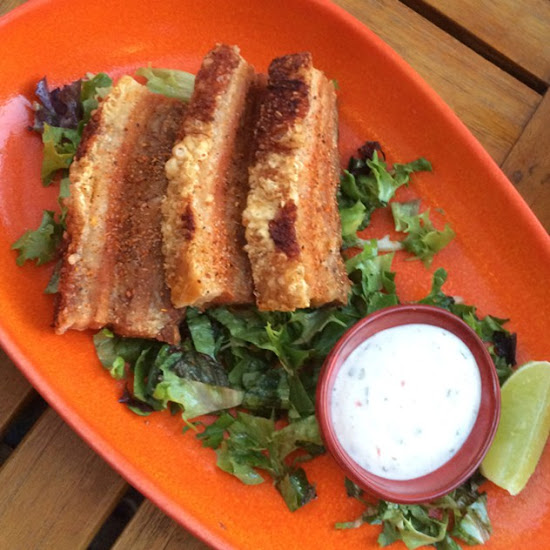 Points South is one of those places where making a simple decision about dinner can be quite difficult because everything sounds so tempting. Last time I was there with my family, we ordered what seemed like everything on the menu. We started out with the yuca croquettes, shrimp ceviche, lamb ribs, and grilled octopus, then went on to the beef short ribs and duck prepared two ways. A dish of chicharrónes, too, because every meal needs to have a side dish comprised entirely of slabs of fried pork belly. Every meal. Each dish was better than the last. Smothered in a honey chipotle barbeque sauce and complimented with garlic chips, scallions, and creamy mojo, the lamb ribs were a huge hit. Even my Dad, who has had a lifelong aversion to lamb, said they were so good, he would have eaten the bones if he could. The fork-tender beef short ribs, too, were excellent, infused with the spicy flavor of bittersweet chocolate sauce. We could easily have polished off a second order. But there was also that duck dish, a special that night: a large confit leg with luscious meat and crispy skin plus medium-rare duck breast, served with mashed potatoes and roasted root vegetables. 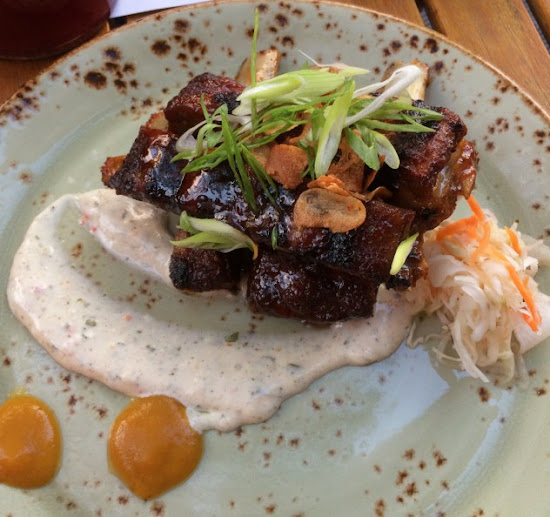 We were too stuffed to get dessert, and would’ve had trouble deciding between the flourless marble cake of Venezuelan dark chocolate, dulce de leche, and cafe au lait whipped cream, and the pastel de maiz, a corn cake with chile-lime macerated berries, candied lime zest, and coconut whipped cream. The flan with orange liqueur caramel sounds yummy, too.

Points South also serves brunch and lunch. The “platos pequenos” (small plates) are similar among the three meals, but entrees are replaced by a selection of pupusas, a Salvadoran dish of thick corn tortillas stuffed with cheese and/or other items like beans or meat. There are egg dishes at brunch as well. Cocktails ranging from the Latin American classics mojitos, caipirinhas, and pisco sours to house signatures like the tequila-based Cucumber Fresco are available with every meal (as are those chicharrónes).

This summer, Points South will be hosting the Mason Dixon Master Chef Tournament. If you’re lucky enough to be in Baltimore from June into early August, you can attend one of the battles, which are held on Mondays and Tuesday evenings. The Tournament pits two local area chefs against each other in a themed three-course battle, not unlike the televised Iron Chef competition that originated in Japan and continued on the Food Network for many years (and is poised to make a comeback). Please see http://www.masondixonmasterchef.com/ for information and to purchase tickets.