Korean-born, Oklahoma-raised Danny Bowien is one of the hottest properties around. In 2011, Mission Chinese Food, in San Francisco, was named one of Bon Appetit's best new restaurants, and now he's featured in the July 2013 issue of Food & Wine as one of the country's best new chefs.

The New York branch of Mission Chinese Food opened in 2012, and I've read nothing but raves. (Ok, there have been some bellyaching on Yelp, but that's to be expected.) On my recent trip to New York, I planned to be in the vicinity (SoHo) and thought it would make a great spot for lunch.

Turns out lunch is the best time to visit Mission Chinese Food. I got there a few minutes before the opening time of noon and there was already a short line. (At dinner time, the tiny restaurant's line, and, consequently, the wait, is far longer.) After a brief amount of time, I was taken to the dining room and, as I was a lone diner, given a seat at the bar, where all of the servers were incredibly nice and attentive to my needs.

Mission Chinese is famous for their spicy "Americanized Oriental food" with dishes like kung pao pastrami and thrice-cooked bacon. Both of those entrees have two flame symbols next to them on the menu, which according to the legend means "very freakin spicy." It was very hot and humid in New York and I had already done my fair share of sweating, so I figured one-flame spicy was about as hot as I wanted to go. I ordered two dishes from the hot appetizer section of the menu, the shaved pork belly with soy caramel, garlic, and Sichuan pepper, and the salt and peppered soft shell crab with buttermilk ranch dressing. 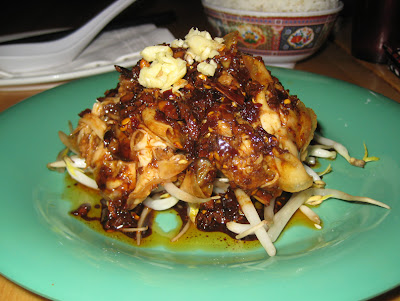 The menu suggests that the pork belly needs an accompaniment of a la carte rice, so I shelled out the additional $2 for a bowl. I suppose that was a warning to me that the dish was very spicy, but I chose not to heed that warning, instead putting faith in the fact that the dish had only one flame symbol. Dummy.

The dish was served cold, rather than hot, but that did not detract from the flavors and textures of this dish. The shavings of pork belly were meltingly tender. The sauce was a darkly-flavored melange of garlic, caramelized soy, maybe some Chingkaing vinegar, with some raw garlic on top for good measure. And it was full of the sensation the Chinese call ma la - numbing and spicy. There was so much Sichuan peppercorn in the dish, my nose went numb after a few forkfuls. What was worse, the dish was firey as I was eating it, of course, but when I attempted to put out the flames with the rice, it only served to fan them even higher. So the rice was a big bomb. What I needed was a glass of milk. If I drank milk. 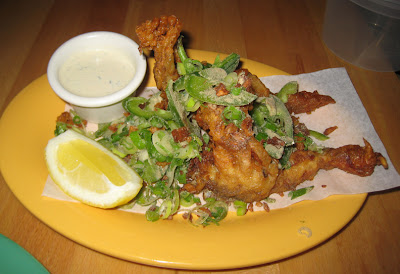 The soft shell crab was much milder, provided I didn't eat any of the slices of green chile pepper scattered on top. It was a tad too salty though. I can't fault the crisp texture of the crust, or the ranch dressing, which tasted like tartar sauce, if tartar sauce were made with buttermilk.

There was a large party at the table next to the bar and they ordered a great many delicious-looking dishes. I heard several times, "this is really spicy," and have to wonder why restaurants make food hot just for the sake of making things hot. Some of us enjoy a nice bit of heat, but we're not all "chile-heads."

Senses completely overloaded, I headed out once more into the incredible humidity, in search for something cooling, like ice cream.