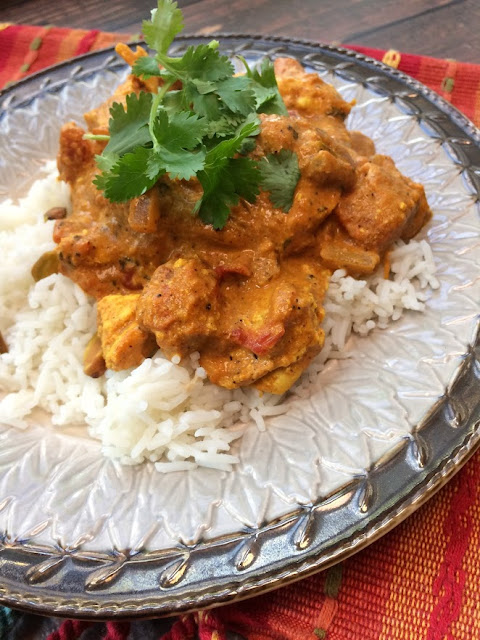 Though not entirely authentic, chicken tikka masala is one of the western world's favorite Indian dishes. It's rich, buttery, and tomatoey--rather decadent, if you ask me. But also absolutely delicious. While it's easy to order Indian carry-out or even delivery these days, it's hard to tell if a restaurant's tikka masala sauce includes cashews. That really matters for someone like my brother, who has a nut allergy. And he just looooves chicken tikka masala. Many times he's ordered it only to find that he can't eat it. I end up with it, which is great for me and not so great for him.

Making tikka masala at home is probably the best solution, and I've found a recipe that tastes just like the restaurant version, doesn't contain nuts, and isn't all that complicated to make. Sure, it has multiple steps, but none are difficult. And all of the ingredients are easy to find. All of them are regularly in my pantry, and most should be in yours.

The original recipe makes 6 servings, so I cut it in half. This still made enough to feed two people twice, with a veggie side dish and naan or even flour tortillas to mop up the sauce. Taste the sauce before serving and add more garam masala or cumin if you think it needs a bit more spice (I did). I think next time I make this, I'll puree the sauce with a stick blender before adding the chicken.

Add tomatoes with juices and bring to a boil. Reduce heat and simmer the mixture, stirring often and scraping up browned bits from bottom of pot, until sauce thickens, 8-10 minutes. Add cream and chopped cilantro. Simmer, stirring occasionally, 30 minutes.

Meanwhile, preheat broiler. Line a rimmed baking sheet with foil and arrange chicken in a single layer. Broil for five minutes, until chicken starts to blacken in spots, flip pieces, and broil another 4-5 minutes. Chicken won't be cooked through. Cut it into small pieces, add to sauce, and simmer until it is cooked through, 8-10 minutes.

Serve with rice and cilantro garnish.