The last couple of times Mr Minx and I went out for sushi, I was disappointed. While both meals featured very fresh fish, they seemed bland overall. Mr Minx says we probably just ordered badly, but I think I was just ready for something completely different. So on a recent excursion to Fells Point, I decided Sticky Rice would be the ideal place for lunch.

We vacillated between an appetizer cheekily called "sticky balls" and its vegetarian cousin, "garden balls," before choosing the former. Made with a thin skin of tofu with a pocket cut into it, the balls are stuffed with tuna, crab, and rice flavored with Sriracha before being deep-fried until crisp and topped with scallions, wasabi dressing, eel sauce, and tobiko. They are unlike any inarizushi we've ever had in the past, and I must say - a vast improvement. (Inari skins are typically soaked in a sweet soy syrup before being stuffed with plain rice; I find them to be far too sweet.) We liked the delicate crispness of the tofu, and the balance between the spicy rice and the two sauces. 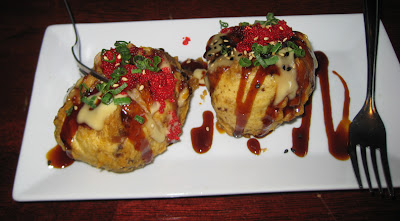 We also had two rolls. One was a special, the Scorpion roll, stuffed with fried soft shell crab, plus avocado and cucumber. The other was called "Drawn-N-Buttered," an inside-out roll with tempura shrimp, lump crab, cucumbers and scallions. Sounds fairly normal, but it was served with a garlic butter dip. Who knew that garlic butter was such a fine accompaniment to sushi? We found ourselves dipping both rolls into it. Our only quibble is that the butter might have been tastier if it were hot, or at least warm. 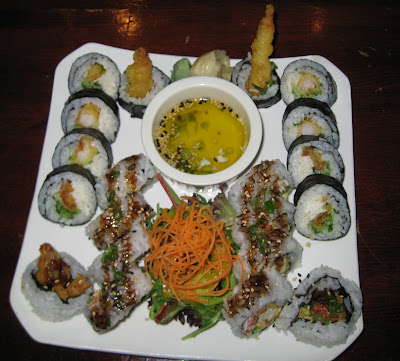 A nice touch: the carrots and greens on the platter were not merely a garnish but an actual salad topped with a bit of the usual tangy orange sushi restaurant dressing. It was a nice acid counterpoint to the richness of the butter sauce.

Sticky Rice proved a welcome respite from our sushi doldrums.