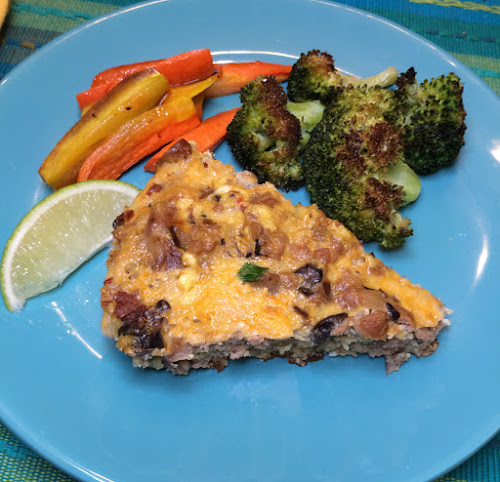 Over the past couple of months, I've become addicted to the Milk Street Radio podcast. Milk Street is Christopher Kickball's new gig, after America's Test Kitchen/Cook's Country. Recently I subscribed to the new magazine and was excited by several of the recipes, particularly those I thought could easily be converted to Whole30. Like this pork and mushroom "omelet," based on a Cambodian dish called pong mouan snol. The authentic recipe folds a traditional flat omelet over a meaty filling, but Milk Street combines it all into one dish to make something more like a frittata.

The recipe only had two forbidden ingredients: soy sauce and sugar. Both are easily substituted with legal items like coconut aminos and dates. I made a few other adjustments as well, because I do like my food to be flavorful and I didn't think 1 tablespoon of fish sauce was enough. Nor did I think that 3 tablespoons of oil were at all necessary. Pork is plenty oily.

The result was delicious--spicy, savory, lightly sweet, and packed with protein. And leftovers made for fabulous breakfasts, eaten at room temperature or warmed up. 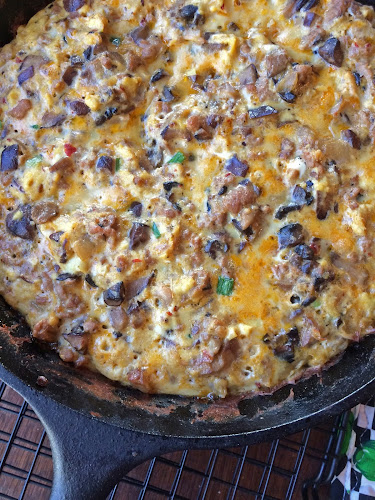 Heat the oven to 400°F with a rack in the upper-middle position.

Add the oil to a 12" non-stick, oven-safe skillet or cast iron pan and cook mushrooms and onion with a pinch of salt over medium high heat until the mushrooms give up all of their moisture and the onion is translucent. Add the pork and cook, stirring frequently and breaking up the meat into small pieces with a wooden spoon. Add 1 tablespoon of the coconut aminos, 1 tablespoon of the fish sauce, the sambal, dates, ginger, and white pepper, and stir to combine. Continue cooking until the pork is cooked through. Taste for seasoning and add some or all of the other tablespoon of fish sauce. You can also add more sambal to taste, if desired. Sprinkle the scallions over the meat.

In a large bowl, combine the eggs, beating well with a fork. Season with the teaspoon of coconut aminos. Pour the eggs over the meat in the pan and cook, stirring from the edges to the center, until the eggs begin to set, 2-3 minutes. Place the skillet in the oven and bake until the top is set, 5-7 minutes.

Put the skillet on a wire rack and allow to cool for a few minutes. Run a rubber spatula around the edge and under the frittata to loosen. Slide onto a cutting board and cut into 8 wedges.