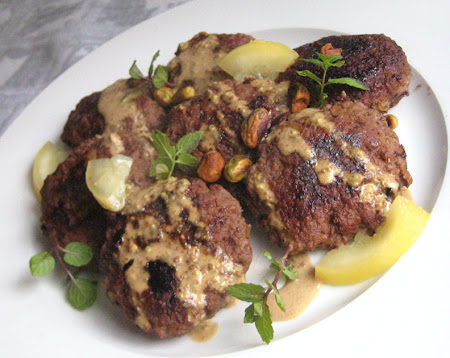 You may recall from my recap of Time Machine Chefs back in August that I expressed admiration for chef Silvena Rowe, of the restaurant Quince in London's May Fair Hotel. Her ballsy attitude on the show made me check if she had any cookbooks available in the U.S. - and yes, she does! A couple, actually, and I chose to buy Purple Citrus and Sweet Perfume: Cuisine of the Eastern Mediterranean, mostly because I liked the idea of purple citrus. :) While no actual purple citrus were harmed during the reading of that book, by the time I was done with it, I wanted to cook every recipe. I even bought a jar of grape leaves, which I have never used before.

The recipe that stood out most for me was for lamb kofte with pistachio sauce. Kofte are meatballs or small patties made from ground meat, and I just happened to have some ground lamb in the freezer. There were also pistachios and tahini kicking around for the sauce, as well as the last vestiges of our garden's fresh mint and all of the recipe's required spices. (Find the recipe here.)

Toasting and grinding the pistachios was the most difficult and time consuming part of the process. Well, not that either the toasting or the grinding part of the equation was difficult, but cleaning out the coffee grinder that I used for the purpose was not fun. (We have two - one for coffee, one for other stuff.) The sauce ended up tasting more of the tahini than the pistachios, which was a little disappointing, but the kofte were wonderful. I had swapped out the currants in the recipe for dried cherries, and they lent a lovely sweetness to the savory spice- and mint-flavored patties. I also chose to serve some home-made preserved lemons as a garnish, and their juicy salty tang was a perfect accent.

I hope to try other recipes from this book over the coming months and will post my adventures here. In the meantime, do try the recipe for yourself.