Going Vegan? These Products Make it Easier Than Ever

More and more people are going meatless these days--a fine thing for our planet. The less we rely on meat products, the less we'll need factory farming, and that means fewer pollutants in our air and water supply and fewer greenhouse gases. But those of us who have trouble giving up animal products entirely need good substitutes. I'm not talking meat substitutes, per se. I'm fine with tofu and tempeh and other proteins that are really nothing like animal products. But I think turning vegan would be easier if there were more good vegan butters and cheeses. I've tried several over the years and have been pretty unimpressed. Most vegan cheeses are even more plastic-like than pasteurized processed cheese "foods," and their flavor is...let's just say they don't taste very good. I stumbled upon Miyoko's creamery last year and tried a sample of their French Style Winter Truffle soft cheese, thinking it was dairy cheese. (I didn't have my glasses on.) I thought it was mighty tasty stuff--lighter than cream cheese or boursin or brie, yet still cheesy-tasting, with a nice truffle aroma and flavor. 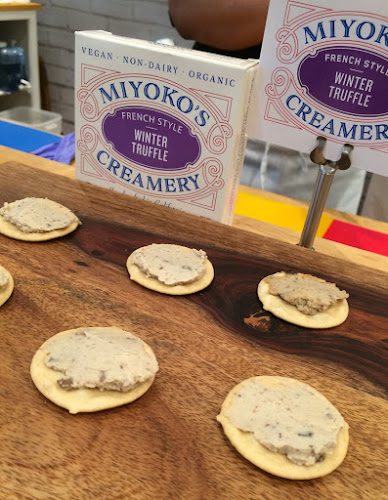 When I took a closer look, I was astonished to see it was completely animal-free. When I complimented one of the ladies who was preparing more snacks, she suggested that I try the butter. So I did. Vegan butter has been around forever--think margarine--but the closest it has ever gotten to tasting like butter is...never. I think that Earth Balance is pretty good, but Melt tastes too much like coconut to pass. Miyoko's Creamery butter, however, is pretty damn buttery. I tried one of the little squares of rye bread schmeared with their European Style Cultured VeganButter and was impressed at how close to cow's milk butter it tasted. I'm not saying it tastes like cultured dairy butter (like Kerrygold, for example) which has its own special funk, but more like conventional butter. Still--it's a vegan product that tastes like butter. Hallelujah!

Miyoko's secret is that they use proprietary bacteria cultures in their products, like in dairy cheese- and yogurt-making. Some of their cheese products also use miso, a fermented product that helps with the flavor. 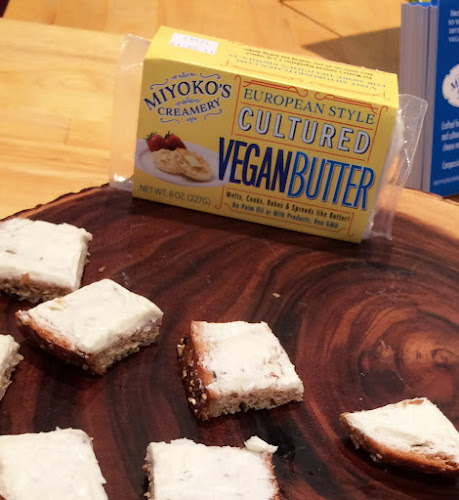 I also sampled a bit of panini made with their VeganMozz, and can say that yes, the cheese does melt. It browns, as well, making it great for vegan pizzas. Better than dollops of mostly flavorless vegan "ricotta," IMHO. Miyoko products are available in Maryland at Whole Foods, MOM's Organic Markets, and a few other places. Check out their web site for more locations.

Another vegan product that struck my fancy was Amella caramels. Most vegan caramels I've encountered are made with coconut oil, and they taste like coconut. That's fine if you like coconut, but if you don't....then what? Amella caramels use cocoa butter as the fat, which is super clever if you ask me. Of course that means their product tastes like chocolate, but as they dip all of their flavors in chocolate, you know you're getting that flavor from the start. (Personally, I've always thought people who don't like chocolate are weird.) 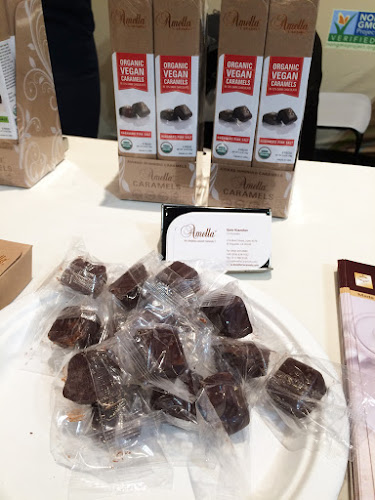 Amella's caramels are fragrant and have a lovely chew, like a butter caramel. They come in flavors like coconut almond, habanero pink salt, and gray sea salt. I've tried them all, and want more.... Buy them online at Amella's Caramels.

Finally, another product that struck my fancy recently was Maprao Coconut Jerky. I don't like meat jerky. I don't like the texture or the smell or anything about it. But coconut jerky is lovely and smooth, yet somewhat chewy. There's no fibrous weirdness like there is with meat jerky. Coconut jerky of course has a coconut flavor, but the spices gave it a savory kick. I liked it. I have no idea where to buy it, but there's another company called Cocoburg that also makes coconut jerky; their products are available at Amazon. 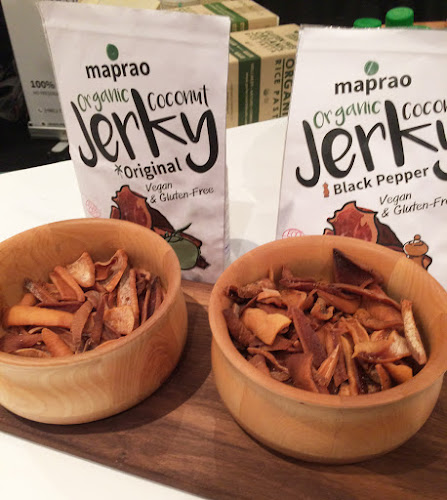 There are even more interesting vegan products available these days, and I hope to talk about them more in the coming months.