My brother discovered Fiesta Mexicana first, when he lived on the east side of Baltimore County. He and Dad would go to the tiny family-run restaurant for lunch on a semi-regular basis, which made me wish Mr Minx and I lived closer. The two of visited the restaurant in 2012, while we were writing Food Lovers' Guide to Baltimore. We ordered the Paquet Eduques, a combo platter including two enchiladas, and one each sope, taco, quesadilla, and flauta. We would have ordered more, but in those days we were eating at multiple restaurants a day in order to write about as many as possible before we hit our rapidly approaching deadline. We especially enjoyed the authentic Mexican quesadilla, which only vaguely resembles what goes by that name here in the US. 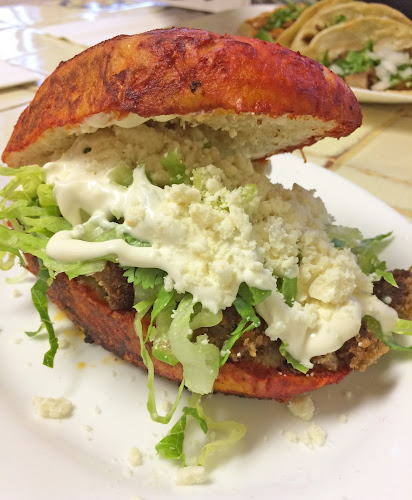 Recently, my Dad moved to the area and we took advantage of the proximity to visit Fiesta Mexicana not once but twice in a matter of weeks. The first time, I tried the pambazo, a sandwich served in a roll that has been brushed with a savory guajillo chile sauce and seared, then stuffed with meat and garnished with lettuce, crema, and queso fresca. The normal meat filling is chorizo with potatoes, but I opted for the Milanesa, a breaded beef cutlet that they cut into pieces and pile onto the bread. The sandwich had lovely flavors and textures, from the slightly chewy seared parts of the roll to the cool cream and everything in between. I could get this every time, but there are so many other things on the menu, I'm definitely going to have to branch out. 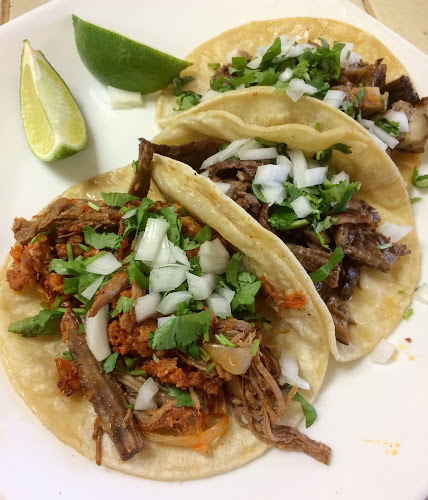 On the next visit, I tried three of the tacos: carnitas, carne asada, and campechanos, which is a combo of chorizo with shredded beef. The fillings are generous and the corn tortillas are thick enough that they don't need to be doubled, but I was a bit disappointed. Both the carne asada and carnitas were tough and chewy, and I really couldn't tell the pork from the beef. The campechanos was the best of the three, but was also lacking in moisture. 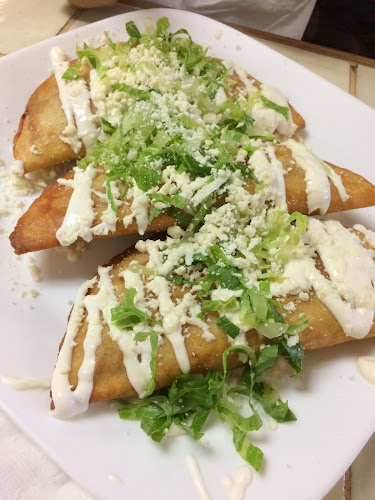 My Dad got his favorite, the quesadillas. Made from pockets of fresh masa stuffed with your choice of meat, cheese, or veggies, these are closer to turnovers than what we normally consider a quesadilla. The texture is both crisp and tender, and they are especially good when stuffed with chorizo and potatoes, or spicy chicken. He normally doesn't like sour cream (or so he says) but he gobbled these up even with the generous drizzle of crema. 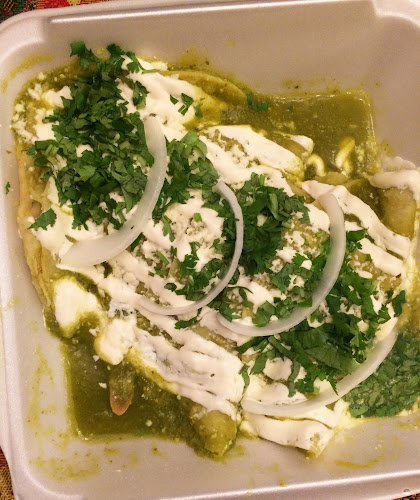 On one occasion, we ordered enchiladas to go. Normally stuffed with shredded chicken and topped with a spicy green sauce, they can also be filled with any other meat for a slightly higher price. Occasionally, molé sauce from Mexico City is available, which I am sure is a treat.

On both occasions, the restaurant was full of patrons ordering things like nachos, chilaquiles (eggs with tortilla chips soaked in chile sauce), cecina (flank steak), and tostadas, all of which looked tempting. Next time I'll try one of those, if I don't just get another pambazo.