Anyone who had ever been to Crepe du Jour on Sulgrave Avenue in Mount Washington realized that while they had a wide selection of sweet and savory crepes available, they also had a full menu of French favorites like soupe a l'oignon and coq au vin. Those who had never been there, however, probably thought it was just a crepe shop. Mais non! To end seventeen years of possible confusion, owner Mustapha Snoussi changed the name of his French restaurant to Le Bistro du Village. A bit of truth in advertising, as their web site notes.

To help spread the word about the name change and the menu they've always offered, the restaurant invited a select group of local media influencers in for a lovely three course dinner. I was happy for the opportunity to sink my teeth into some duck confit and escargots.

The menu at Le Bistro du Village is divided into several parts. Hors d'oeuvres, les salades composer, les moules maison, and les soupes du jour are essentially appetizers, although many dishes could be a meal unto themselves. Plats Principaux are entrees; there are also sides and, of course, crepes. Desserts, too, for those who don't want to end their meal with a sweet crepe. 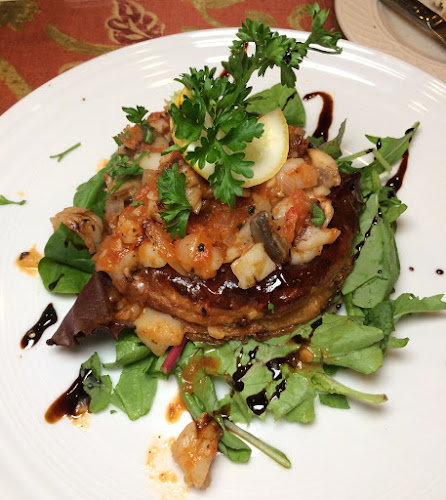 We started with four apps for the table. My favorite was the seafood vol-au-vent, a puff pastry shell filled with a mixture of shrimp, scallops, and mushrooms in a tomato-based Provençal sauce. The seafood was tender, and the sauce was simply delicious. 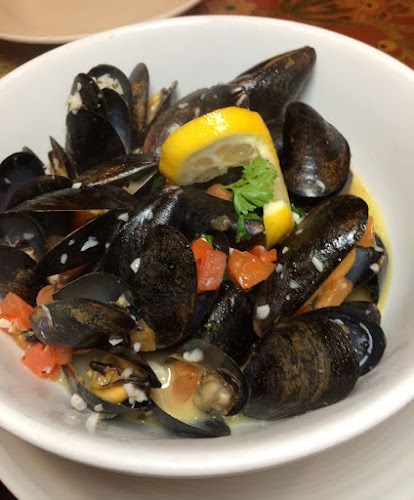 I also enjoyed the moules marinières, a classic preparation of mussels cooked in white wine, with tomatoes, garlic, parsley, & shallots. The mussels were small (a good thing - I find large mussels to be tough) and tender, and the sauce begged for lots of crusty bread with which to mop it up. 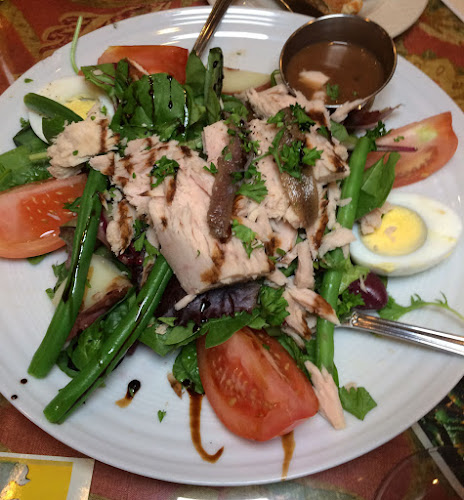 We also sampled a salade Niçoise, a classic composed salad usually (but not always) involving tuna, tomatoes, eggs, and green beans. This dish especially would make a nice light supper on its own. 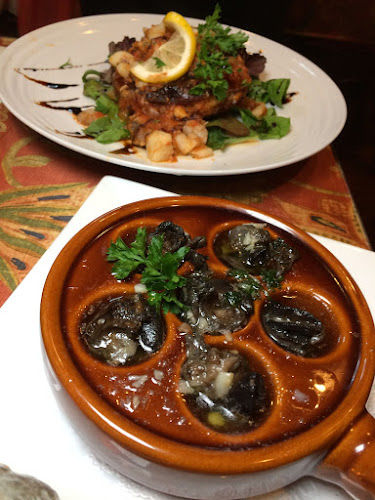 And what's a French dinner without escargots in garlic butter? A travesty. These were classic all the way. Honestly, more restaurants should use escargots. They are really delicious. 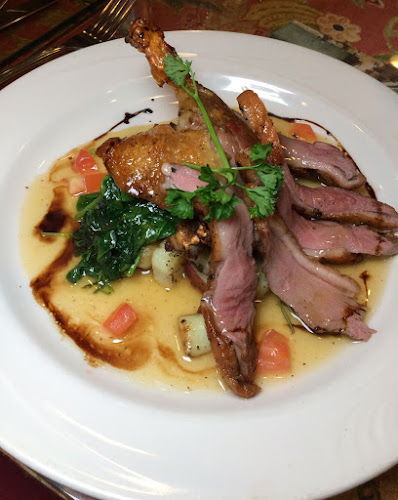 For my entree I chose the duck, which included a confit leg and duck breast that was cooked a la sous vide before the skin was browned in a pan. It came with potatoes, spinach, and an orange sauce. At first I was worried that the orange sauce would be too sweet (my first experience with duck a l'orange came at age 11, with cold duck and cloying sauce) but was happy to find that the one at Le Bistro du Village is light and well-balanced. And the dish is beautiful, no? 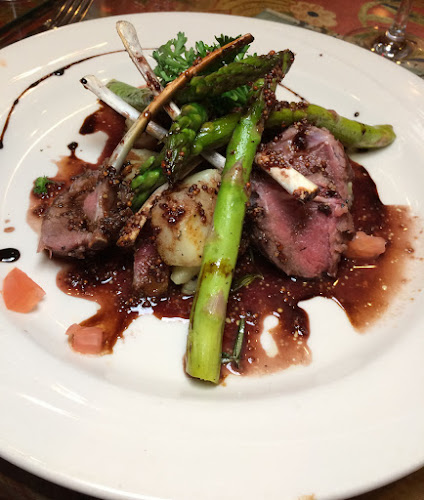 Also lovely was the carré d'agneau aux herbes, herbed rack of lamb to you and me. The perfect pink chops came with asparagus, roasted potatoes, and a Dijon mustard sauce.

Others at the table ordered the perfectly cooked salmon filet and the unphotogenic but tasty coq au vin, which came over a bed of noodles. There are also plenty of other classic French dishes on the menu, like boeuf Bouguignon and chicken cordon bleu, but also a burger topped with Brie and bacon, for those not wanting to venture too far into the unfamiliar territory of a foreign cuisine. (I am being facetious. Some people just like burgers.) 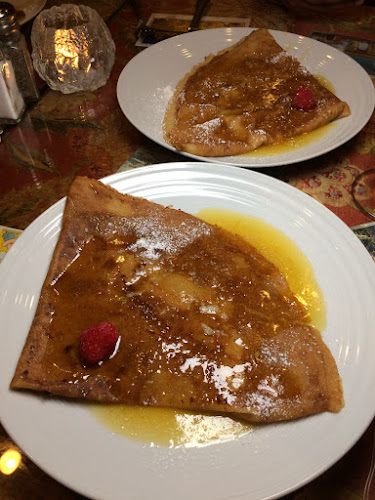 Our dessert choices were between crepes Suzette and chocolate mousse. All but one of us opted for the crepe, which was not flambeed for us at tableside (the number of crepes would have created quite a blaze!) but still had the classic citrus/Grand Marnier flavor. The crepe was so light and tender, despite its size, most of us had no problem polishing off the whole thing.

Le Bistro du Village is open 7 days a week for lunch, dinner, and weekend brunch. The space is cozy and inviting, and the staff and owner are delightful. I will definitely be visiting more often, and you should, too.