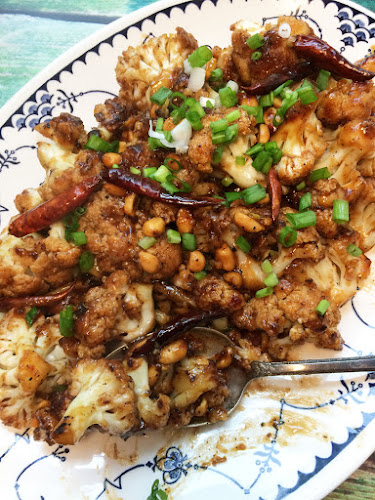 Kung Pao chicken is Mr Minx's favorite Chinese dish. He also uses it to measure the worthiness of a Chinese restaurant--if their kung pao is to his liking, we'll most likely eat there again. So when I saw this recipe for kung pao cauliflower in Bon Appetit, I bookmarked it for future use. Mr Minx isn't the biggest fan of cauliflower, but I thought the kung pao-ness of it would sway him.

Cauliflower is becoming the new Brussels sprout. Not all that long ago, the lowly miniature cabbage was relegated to horror stories about hated childhood foods of the 60s and 70s, now they're on trendy restaurant menus everywhere. Or at least they were. Nowadays, cauliflower is popping up instead, usually in some sort of preparation with East Asian origins. Though East Asian cuisines celebrate most members of the brassica family, cauliflower isn't especially popular. However, cauliflower is sturdy and meaty and has a fairly neutral flavor, as far as cruciferous vegetables go, and can be adapted to many types of cooking methods and flavorings. Why not kung pao?

We had a somewhat large cauliflower in the fridge, so I decided it was time to try the Bon Appetit recipe I had bookmarked last year. I changed the method and the ingredients a tad. I felt there was not enough sauce, nor was it going to be sweet enough for our tastes, so I added a bit more sugar and hoisin. The recipe called for sherry vinegar, but we always have a bottle of Chinese black vinegar in the cupbard, so I used that instead. More authentic, as if authenticity matters here. The original recipe also calls for a serrano chile in the stir fry, but rather than buy additional types of chiles (we had the dried japones chiles on hand), I simply added some sambal to the sauce.

If you like the idea of kung pao but are not into the heat of it, you can omit the dried chiles. They aren't just for show--cooking them in the hot oil imparts heat to the oil. Leave out the sambal too, if you're wimpy like that. Not everyone has the same tolerance to chiles and you shouldn't be judged on it.

The dish was a huge success. The kung pao sauce is so good, I think I'll use it on a protein next time, perhaps chicken thighs or tofu. It would probably be work on other vegetables such as broccoli, or hey, even brussels sprouts. 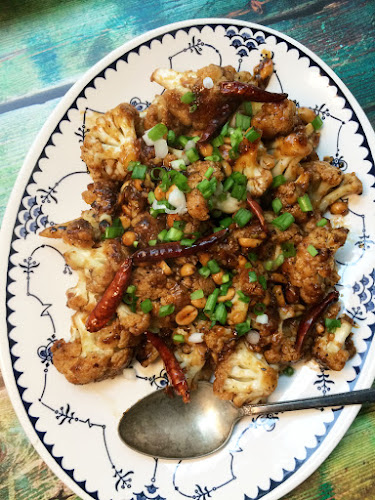 To make marinade: Stir wine, cornstarch, and soy sauce in a large bowl and set aside.

To make cauliflower: Preheat oven to 400°F. Line a baking sheet with foil.

Remove leaves and cut cauliflower into medium florets. Toss with 1 tablespoon of the vegetable oil and arrange in a single layer on the baking sheet. Roast for 15 minutes, turning once, until cauliflower is browning in spots. Stir the marinade with a fork to reincorporate the corn starch and add the cauliflower to the bowl. Toss to combine and set aside.

In a large saute pan, heat the remaining tablespoon of oil. Add the dried chiles and peppercorns, stirring regularly, until fragrant. Remove the chiles and peppercorns to a plate and set aside. Add the marinated cauliflower to the oil in the pan, discarding excess marinade. Cook the cauliflower for a few minutes to rewarm. Add the white part of the scallions, the ginger, garlic, and peanuts and toss. Pour in the sauce and toss again. Cook until the sauce is fragrant and the cauliflower is coated.

Transfer to a serving dish and garnish with the scallion greens.