We finally went to Parts & Labor. And I almost hate to admit that I loved everything about it.

Why do I hate admitting it? Well, for one thing, it's not much fun to write a review for a truly delicious meal. What else can be said other that dishes are delicious, amazing, tasty, well-prepared, outrageously good, and near perfect? And I can use all of those commendatory words for Parts & Labor.

For another thing, and I know I'm probably in the minority here, I think Spike Gjerde's restaurants are a bit pretentious. Like not serving lemons or soda (soda!) in cocktails at Shoo-Fly because neither are local products. (That policy has changed, due to public outcry. Sometimes you have to give the people what they want.) But Parts & Labor hits all the right notes--good food, good drinks, extremely pleasant service. We even got a table by a window, which made for good photos.

Parts & Labor is very meat-centric, so vegetarians beware. The building, once a former tire shop, also houses the butchery for the Gjerde empire. Meat comes into the place whole (as in whole pigs and cows) and exits as sausage, charcuterie, and other meaty delights.

We started our meal with a selection of three items from the "salt house," aka charcuterie. There were six or so choices from which we selected a salami-like smoked boar sausage, lomo (a dry cured pork tenderloin), and bastirma, a highly seasoned air-dried beef. The latter, with it's curry-ish flavor, was the table's favorite, but all were outstanding.

We tried the lamb kielbasa from the sausage selection of the menu. At $12, it was the most expensive selection on the list, but it's extreme deliciousness made it worth every penny. Plus, it was huge. The sausage's smokiness balanced the lamb's usual slight gaminess, and it was juicy and nicely seasoned. I think it was my favorite dish out of all, and we tried a lot.

My Dad is a bit of a fussy eater, and he likes his meat on the well-done side. It would have been a crime to order the restaurant's dry-aged beef well done, so we talked him into the pork chop, cooked to the well side of medium. It was moist and tender and even Dad enjoyed it.

He wouldn't have enjoyed the rib-eye, which came medium-rare. Perfectly cooked and rested, the steak had a nice crust and added flavor from a topping of compound butter and bed of chimichurri sauce.

The Korean short ribs were a pretty close approximation of the kalbi one finds in a Korean restaurant, only, I think, more tender. The sweetness of the marinade was offset by a tangy slaw that would have been the only vegetable on the table had I not reminded our party that man does not live by meat alone.

We tried a dish of hominy, which had a strong corn flavor and reminded me of the Southwest. At a book signing recently, someone lamented that hominy is seldom seen on restaurant menus these days, and to that I say...get thee to Parts & Labor.

I think the only dish that I had a complaint about was the dirty rice. While there was plenty of "dirt," in the form of chicken livers and blood sausage, I wanted it to taste even more funky.

The grilled fingerling potatoes were buttery and perfect...

...and the Hearth wok was a bowl of deliciousness. I guess I could complain that the serving was too small, compared to everything else on the table, but the combination of flavors was really nice. A little sweet, a little sour (but not agrodolce), a little salty. 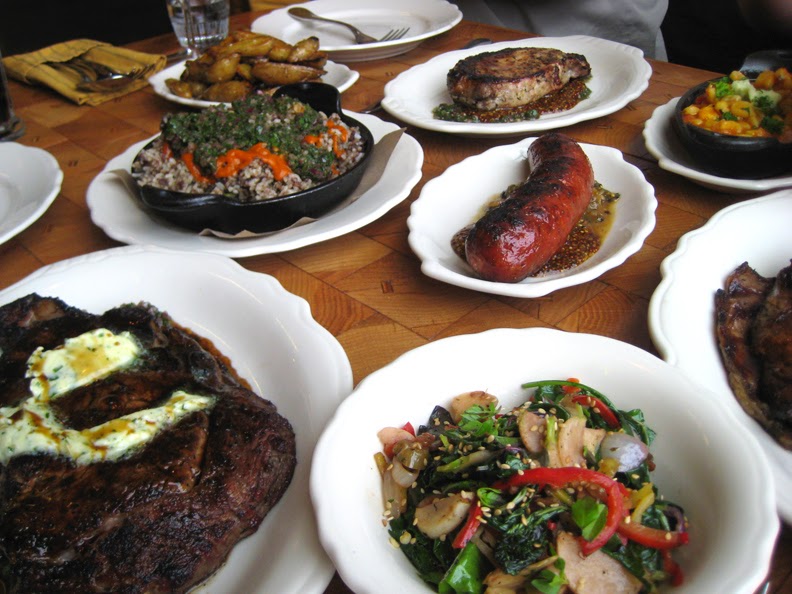 After we pigged out on meat, we ordered dessert. It was, after all, my brother's birthday. He chose the chocolate lard cake. Don't worry, it doesn't taste of lard (maybe a bit disappointingly), just of rich chocolate cake with chocolate frosting.

Dad chose the blondie topped with peach conserve and an intriguing salty ice cream. This thing was huge, definitely share-able by two or more people, so I helped him. I had ordered only a single scoop of goat's milk ice cream, which was pleasantly goat-milky.

Mr Minx went for a peanut butter and bourbon concoction. It was good, but my favorite part was the super coffee-y ice cream that had noticeable bits of ground coffee beans. I wished I had ordered that AND the goat's milk flavor, but I had plenty to eat with sampling everyone else's desserts.

Yes, we made complete pigs of ourselves, and I suffered when the bill came. But it was a special occasion and worth the splurge. I think on future visits we'll limit ourselves to 5 or 6 dishes, rather than 9. And maybe skip dessert. Or maybe we'll just do it all over again.