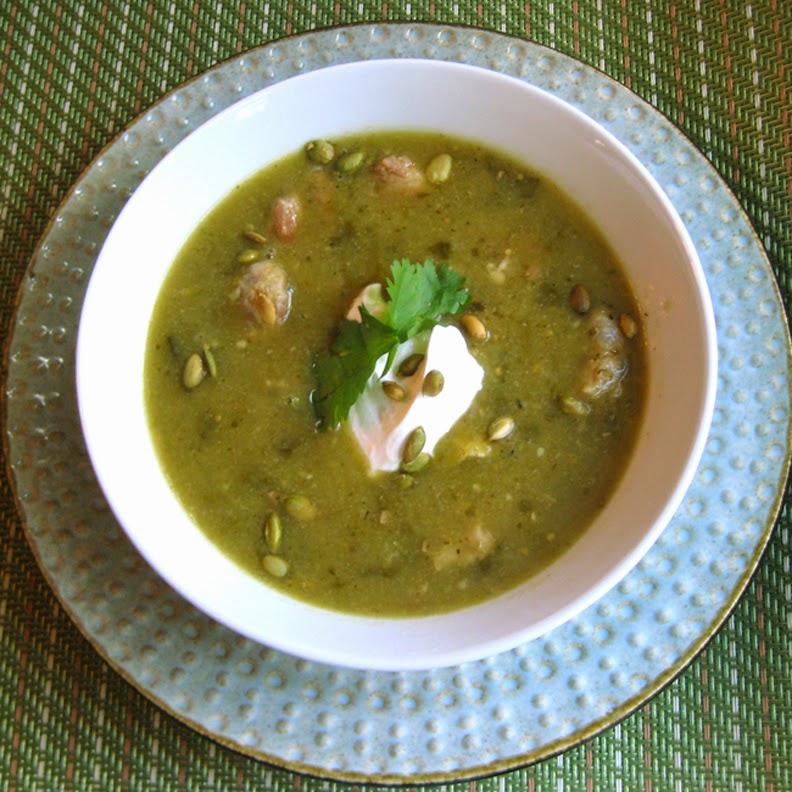 Football season is here, which means a goodly portion of my Sundays are spent in front of the tube, simultaneously laughing and crying with the Baltimore Ravens. Ordinarily, I'm doing mise en place and cooking parts of dinner at different times of the day, but on these football Sundays, I have to get stuff started before kickoff. This usually means stew or chili is on the menu.

I've made and posted several variations on typical beef chilis, so I thought it was high time to try something different. Like a green chili. I made a really scrummy one with ground chicken and canned chiles not too long ago, but I was taking a day off from blogging and didn't bother recording the recipe. This time, I took notes.

Green chilis are tangier than red ones, and a bit lighter, so they are perfect for nippy-but-not-exactly-cold October weather. I roasted the vegetables first, then pureed them in a blender to make a thick green sauce. After a couple hours of simmering, the pork was meltingly tender and the dish was nothing short of perfection. Perfection for a day spent watching both football and baseball playoffs, that is.

Place the tomatillos on a rimmed baking pan lined with foil. Drizzle with some olive oil and toss to coat. Place peppers, onion, and scallions on a separate foil lined baking pan. Drizzle with olive oil and toss to coat. Put both pans in the oven and roast for 15 minutes. Remove tomatillos and scallions. Roast remaining vegetables, stirring once or twice, an additional 20 minutes.

Allow vegetables to cool, then put everything in a blender. Puree the vegetables and set aside.

Brown the meat cubes in a couple of batches. I didn't use any oil, but you may want to if your pork isn't as fatty as mine/you find it sticking. Once the meat is browned, stir in the garlic and cumin, then turn the heat up and add the vegetable puree and stock. Bring to a boil, then lower heat so the mixture is barely simmering.

If the broth seems too runny at the end of the cooking time, mix a tablespoon or two of masa harina with enough water to make a slurry the texture of pancake batter. Turn up the heat to get the chili boiling and drizzle in as much or as little of the slurry as you want, to get the texture you like.