I am so glad to see the end of this show. While I found the previous seasons to be highly entertaining, this season was a real snooze. The fun in watching celebrities cook is the trainwreck factor. In season 1, that lasted all the way to the finale, as Coolio was both a freak and a pretty decent cook. This year's trainwreck was Chris Kattan, and he was the first eliminated. BTW, he was arrested the other day after slamming his Mercedes into a highway construction truck. He wasn't injured, but it seems he was under the influence of some unknown drug. Probably the same one that made him sooo sleepy back in episode 2.

There are only four celebs left, two each on Team Guy and Team Rachael. Herschel, Tiffany, Penn, and Florence meet up with Rachael and someone who appears to be Popeye's gay cousin, Pop-Guy at Hudson River Park. 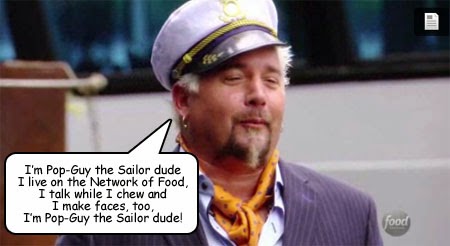 (They were going to dress Rachael as Olive Oyl, until wardrobe realized that Olive Oyl has a neck.)

The celebs will be cooking their finale dinner on the yacht Hornblower Infinity, which seems appropriately named. No, wait, I'm thinking of "blowhard." The challenge is to make a three-course meal in two hours for seven "challenging" judges. (Scott Conant featured largely in the promos, and I can't imagine anyone more challenging than him, except maybe Bourdain, and we know he doesn't want to have anything to do with the Food Network anymore and vice versa.) There will be celebrity sous chef assistance in the form of Vanilla Ice on team Pop-Guy, and Judy Gold on team Rachael.

The boat's kitchen is pretty small, so only two celebs will be cooking at a time, one from each team. The first up are Florence and Herschel. They meet with their respective team leaders to plan their meals. Flo is doing an Italian Sunday supper, reintroducing her spicy marinara for the appetizer course, and Herschel is doing the southern food he knows best.

In the kitchen, Flo wastes a lot of time with her sauce. It's not tasting the way she wants. 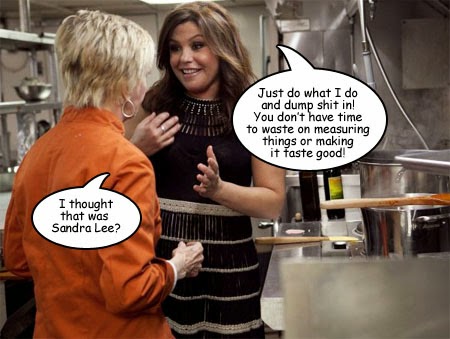 Herschel's meal seems to be much more than 2 hours worth of cooking, but Guy is around to nag him to hurry up. 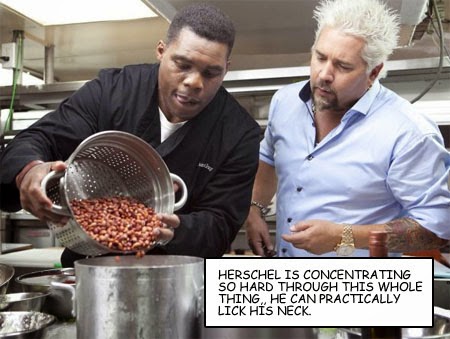 Herschel is calling his sous chef, Vanilla Ice, "Rob." Funny to hear a celeb who uses a stage name being called by his real name. It's like calling Judy Garland, "Frances," or Cher, "Cher."

Cooking time is up and Flo comes out to present her meal to the judges. In addition to the food, each celebrity, because they are ostensibly entertainers, must do some sort of 5-minute presentation. Flo starts out telling the judges that she grew up poor; her dad was a "dirt farmer," and she was the youngest of 10 children. Her mother said Flo was born singing, so she exploited her child by forcing her to perform on street corners for money, like a monkey. 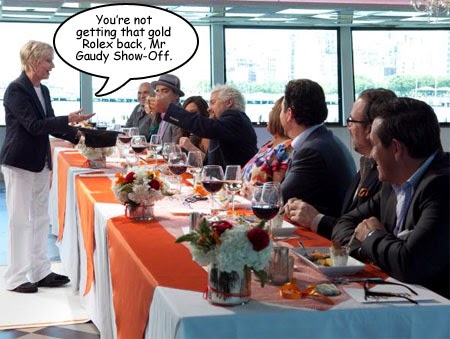 Flo goes back to her roots and passes a hat; the judges guiltily toss in a few bills. Guy offers his gold Rolex. Then Flo tells them that she's donating the funds to her favorite charity--herself--and stuffs the dough into her pants pocket. Then she changes her story and says she will match the funds and donate them to her charity.

She leaves, with Guy's Rolex, and the judges taste her food. The spicy marinara with crab isn't spicy enough and could use salt. Her fish piccata is a little unevenly cooked, but Aaron likes that it's infused with the lemon caper sauce. Finally, everyone seems enchanted by her cannoli parfait.

Herschel comes out next, handing out a nicely-printed booklet with photos of himself over the years. He tells the group about his life, how he won the Heisman, became a Dallas Cowboy, competed in the Olympics, and danced ballet. Honestly, I would have loved to see him demonstrate some of his dance moves as part of his presentation. He leaves and the judges judge. They rave over every part of his meal, and Michael Psilakis calls it "restaurant quality," which is a pretty impressive compliment for a meal cooked by a former NFL star assisted by a vegetarian juggalo. Of course, Psilakis didn't say what restaurant. It's possible he meant Guy's American Kitchen & Bar?

Next up in the kitchen are Penn and Tiffany. Penn says he's too tall for a ship's galley, so he manged to finagle a prep kitchen somewhere else in which to do most of his work. Tiffany is short, so she's on the ship with Rob Van Winkle. She's making arancini as her main course, which is weird because they're more of a snack or appetizer, and the deep fryer is not cooperating with her. Probably because it knows that she's trying to serve something appetizer-sized as an entree and Scott Conant and Aaron Sanchez will have something negative to say about that. (That's a real no-no on Chopped.)Eventually it changes its mind and allows her to fry her balls. Penn and Judy Gold come on board to cook his main course, and while there's not that much space above his head, he's not exactly banging it on the ceiling, either. 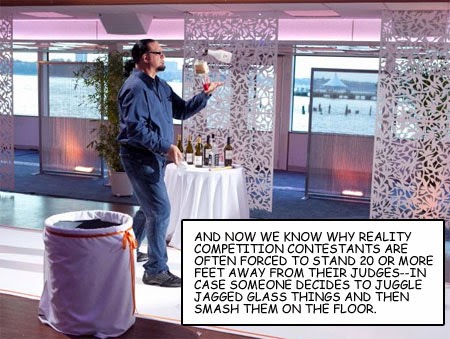 Come meal-time, Penn entertains the judges by juggling broken booze bottles, which make a big mess when he drops them at the end. (Because, as he says, "it's hard to stop.") He leaves, the cleaning crew comes in, and the judges pick around the broken glass shards on their plates to taste Penn's food, aka "Vegas on the Sea," which sounds like a euphemism for a venereal disease. They enjoy his Caesar salad, even Aaron, who has to remind everyone that Caesar salad was invented in Mexico. Penn's halibut was overcooked, but the judges enjoy his bread pudding topped with the ice cream flavor he invented on All-Star Celebrity Apprentice.

Tiffany is Tiffany, so she sings some lame-ass song about her Italian Lover, which is the theme of her meal. When she leaves, Guy takes credit for helping her write the feeble ditty, which explains its lame-ass-ness. The judges enjoy her opening salad of perfectly cooked seafood, and think that making a vegetarian entree (the arancini) was gutsy. They might have liked her tiramisu, if they could have gotten a better taste. However, she served it wee demitasse cups with wee demitasse spoons and there really wasn't enough of anything to judge it by.

We then see the judges scoring each celebrity. Scott Conant is then asked to tally up the votes; presumably he's the only one at the table with either math skills or a calculator. Then the four are brought out and the verdict is announced. 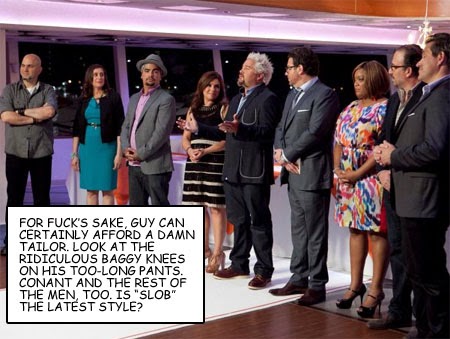 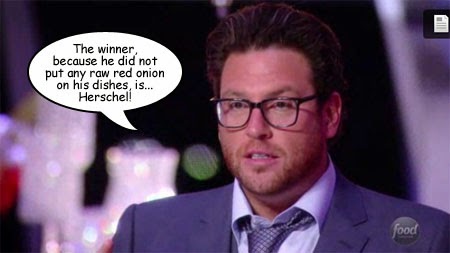 Herschel Walker is the winner, and his charity, Patriot Support, is the beneficiary of $50,000. Penn is named the runner-up (despite his overcooked fish...but...broken glass juggling!), and Rachael and Guy claim to be kicking in $2,500 each to benefit Opportunity Village. 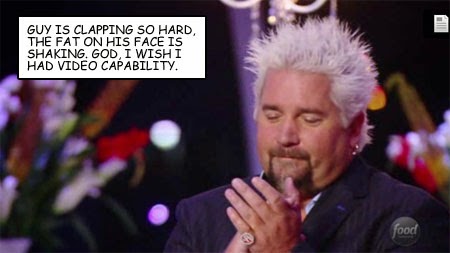 And - it's over! Yay! I hope you've enjoyed this mess.

Next week: Worst Cooks in America, which I will be watching but not recapping.