It's only week two of Rachael vs. Guy and I have already lost my desire to recap the show. The format changes this season--removing the Blind Tasting at the end and assigning a celebrity chef judge to pick both winner and loser--means there's too much time spent watching the celebs having melt-downs in the kitchen. And honestly, it's not that interesting. D-list celebs just aren't. I don't even have particularly high expectations when they're doing what they're known for. Now, put Angelina Jolie and George Clooney in the kitchen and have them melt down? Could have a teeny bit of interest. But only teeny.

But, anyway, this week we have a luau. In New Jersey. Yeah, you just know it's going to be good and authentic. 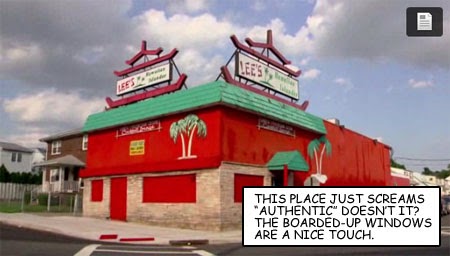 They're doing this at a place called Lee's Hawaiian Islander, in Lyndhurst. Yelpers give it a generous three stars. Upon entering Lee's, Florence Henderson is immediately taken back in time to the Hawaii episodes of The Brady Bunch. 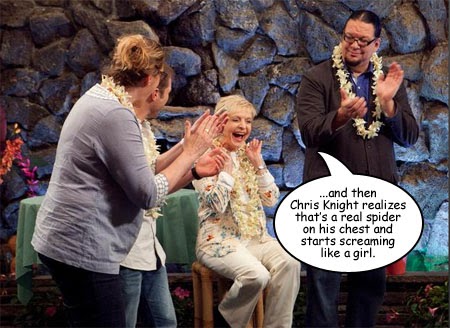 The two comedians were on the bottom last week, so let's see how they're doing this time around: Chris Kattan must have been on a bender the night before, because he just cannot stay awake during the meeting. 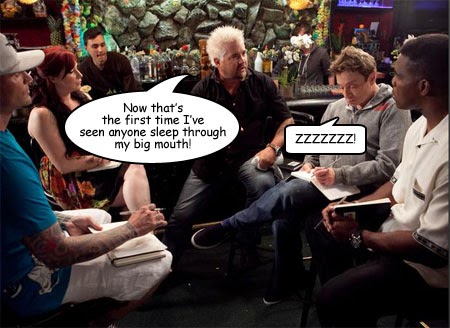 Or maybe, like the rest of us, he simply just does not care. And despite his lack of attention span, he's saddled with two major components of the team's meal--a major meaty appetizer AND the cocktail. I think they just wanted him to go away. As do I.

Judy Gold wants to make something everyone will like, because her weird spicy eggplant stuff from the prior challenge wasn't exactly a big hit. So she settles on mini eggrolls, which Rachael suggests she fill with shrimp and ground pork. And wouldn't you know it--Judy grew up Kosher. She's never cooked either protein, and she's worried. Could be her swan song as well. 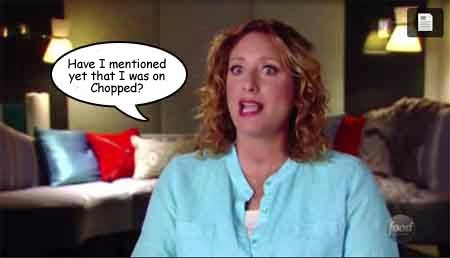 So the eight of them head into the relatively small kitchen and commence to Luau-ing. Tiffany has decided to make a dish with lots of components: mini tacos filled with raw tuna. She didn't realize that she'd be helping Chris, who is having issues with his meat. In addition to that personal problem, he's not efficient with his time management, cutting his pork very slowly and constantly needing to be reminded that there's a rice component to his dish. He's calling it Volcano Swine, btw. 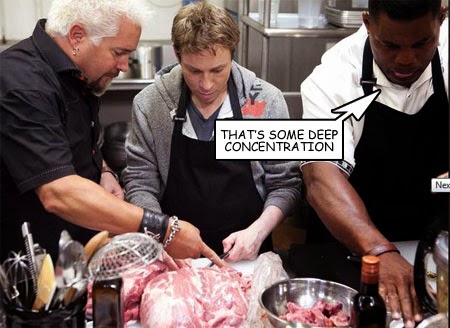 Elsewhere in the kitchen, Penn is whipping up an "authentic" Thai curry sauce that he learned from a Vegas chef. Vanilla Ice is still playing to the camera, despite Guy's admonishments from the week before. And everything he says comes out in rhyming couplets. Please don't confuse that with anything even vaguely Shakespearean or even poetic. He's working on pineapple cake while bragging about his "ridiculous meticulous" kitchen habits. For the sake of accuracy, let's just cut that down to "ridiculous." 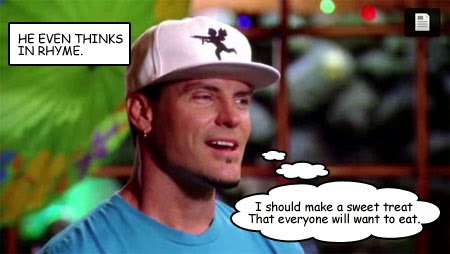 Mama Brady is making ribs, a big project for someone with a broken foot. She has to par-cook them before grilling them. Oh, and did I mention there's only 90 minutes of cook time? 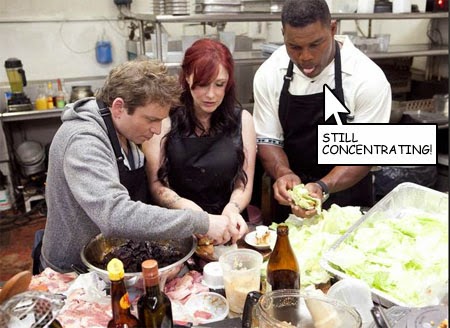 Herschel says that last week he made a dainty dessert, so he wants to do something more manly this week. He chooses chicken lettuce cups. Chicken is his thing, after all. His Renaissance Man Food Services is the largest minority-owned chicken supplier in the US. But dude, chicken isn't not dainty. Especially when you serve it in lettuce cups. 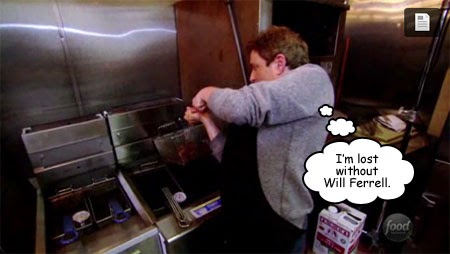 Then there's a fryer issue. There's only one fryer--currently being monopolized by Chris Kattan, who is cooking huge amounts of pork chunks into oblivion--and four people needing to use it. Tiffany has fifty tiny taco shells to make out of won ton wrappers. Jake Pavelka (who?) has tiny pork tonkatsu to fry. And let's not forget Judy Gold's un-kosher eggrolls. (Also do not forget that she was on Chopped.) All the fryer tizzy causes Jake to mutter something about violating the "man code," whatever the feck that is, so he jumps in and grabs the fryer for himself. 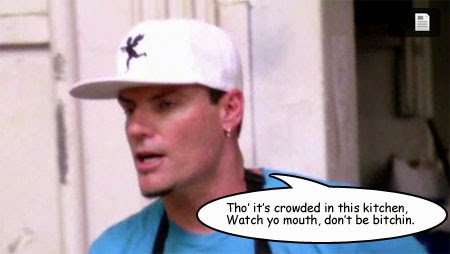 After frying his pork, Jake makes the team cocktail, a ginger Mai Tai. He repeatedly tells us that he's not a bartender. I think he's offended to be assigned the position, which of course is an offense to bartenders everywhere. It's not like bar-tending isn't an honorable vocation. We all need to drink, dammit! Florence helps out by tasting the rum repeatedly.

The kitchen nonsense is eventually over and Team Rachael sends their food out.

NY restaurateur and Chopped judge Marc Murphy is this week's special judge and jury. And apparent expert on luau food. 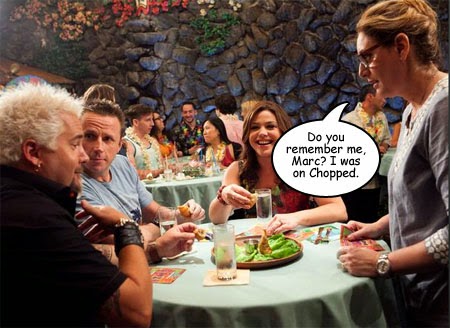 He, Guy, and Rachael all seem to enjoy Judy's eggrolls and Florence's ribs. Jake's pork tonkatsu is a little dry, but Marc commends him on his macadamia nut breading. Penn's Thai-cum-Hawaiian curry chicken with pineapple suffers from too much sweet pineapple, but the judges agree that the sauce is "awesome." (Which of course means nothing.) And finally, Jake "I'm not a bartender" Pavelka's cocktail is, "the bomb." (Again, meaningless.)

Guy's team serves next. 'Nilla's pineapple cake looks impressive, and the cake and compote are good, but he's dumped the sugar bowl into his whipped cream which throws the dish into sweet overload. Herschel put peanuts in his lettuce cups because he was worried about the texture of his chicken (personal problems abound here today), which the judges love. No telling how many patrons went into anaphylactic shock during the meal. One taster called the dish, "delicate," which of course is exactly what Herschel was going for. Tiffany's tuna lacks seasoning, because of course she was too busy helping trainwreck Chris, but she gets points from Rachael for having so many components. And speaking of trainwrecks, Kattan's pork was overcooked and the dish had way too much sauce. However, his "Guy Tai," heavy on the mango and rum though it was, was tasty. 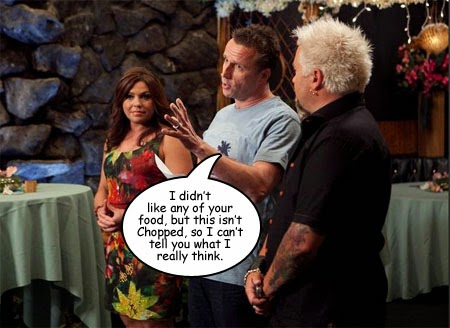 After a commercial break, Marc announces the winners and losers. The audience favorite dish on Guy's team was 'Nilla's pineapple cake, but they did not like Tiffany's taco. I'm going to leave that one alone. The audience also liked Team Rachael member Judy's eggrolls but disliked Penn's chicken curry. Jake's Mai Tai wins out over Chris' Guy Tai. Team Rachael is the overall winner, with Florence Henderson getting the "MVP" award. This means her charity, City of Hope, gets $2500.

Guy's team is the loser, and it's pretty obvious who will be going home. That is, if he doesn't fall asleep on his way out the door. 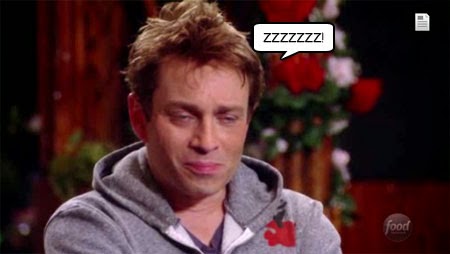