Yes, ladies and gentlemen, Rachael vs. Guy is back, and once again I'll be recapping all the fun and frivolity right here on Minxeats! Wheeee!

:::tosses confetti into the air, pretends to be excited about anything Guy Fieri does:::

We're introduced to the celebtestants as they're dropped off at a Medieval Times. 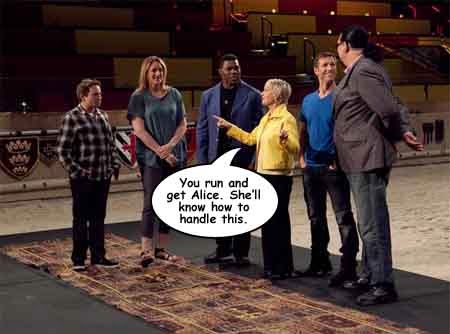 Have you ever been to Medieval Times? No? Then consider yourself lucky. The concept is this: guests are seated at narrow tables facing an arena in which faux jousting and other knight-ly activities are held. (Oddly enough, jousting is one of Maryland's state sports. Yes, we are hip with the times. The Medieval Times.) While observing the "spectacle," serving wenches bring food to the audience. When Mr Minx and I were unfortunate enough to dine there some years ago (thankfully on someone else's dime), we started our meals with mugs of vegetable soup made with dehydrated vegetables (think Lipton) and went on to roast chicken and potatoes...that we had to eat with our hands. In the dark. All the while hoping none of the children around us started a food fight. I suppose that's one reason we didn't get knives and forks, so as not to have weapons with which to subdue other patrons. Also, Medieval man was apparently not civilized enough to eat with utensils.

As the celebs enter the arena, we find that Penn Jillette doesn't even really know how to cook, but former NFL star Herschel Walker owns a restaurant. Comedian Judy Gold tells us for the first of about seven times that she was on Chopped (and the first eliminated), and former SNLer Chris Kattan loves Rachael Ray's "sexy, raspy voice." His imitation of her sounds not unlike Smeagol, so of course I picture this: 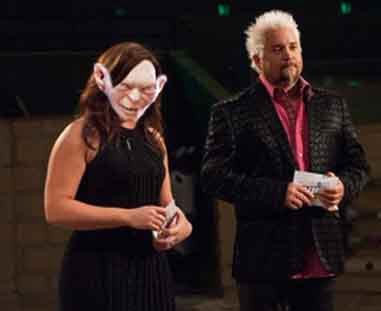 Once all of the celebs gather, Rachael and Guy make a grand entrance and choose teams.

The first challenge of the season: to prepare a "Medieval" feast in 90 minutes. As the teams head to their trailers to pow-wow, Pavelka wonders, if he jumped into his plane, where he'd have to fly to find Medieval food. Honey, you'd need a TARDIS for that. Or a Re-Tardis. 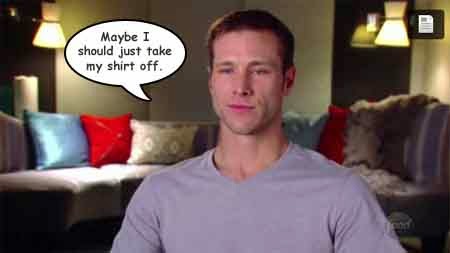 After Rachael and Guy basically tell their teams what each person is going to prepare, they head to their kitchen, which looks like the sad remnants of a Renaissance Faire just before it leaves town. (Anyone else notice that there are far more Medieval elements in a Renaissance Faire than there are anything vaguely resembling the advances that came about in the Renaissance period?) There are droopy tents and rustic tables. There are also ovens and food processors, so it's not looking like this Medieval feast is going to be particularly authentic. 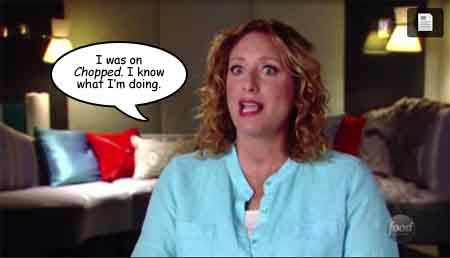 Right off the bat, Judy Gold slices her finger and wastes precious (my precious!) cooking time waiting to be treated by a medic. She then adds a bunch of spice to her eggplant dip without bothering to read the label. Oops...that was chipotle and not cumin! Rachael thinks it's a little spicy but it will be ok if cumin eventually makes it into the mix. Jillette is making giant steaks, and Rachael is concerned that perhaps he started cooking them too early. 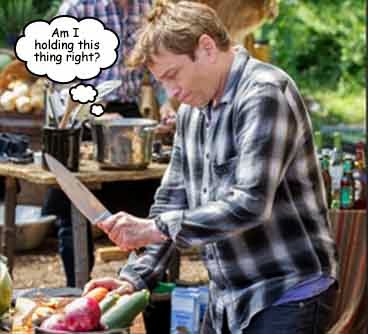 Meanwhile, Chris Kattan is preparing a roasted vegetable dish. Guy had suggested that he cut his vegetables in uniformly-sized pieces so they cook at the same rate, so we see Kattan wailing away at his veg with a knife like a caveman clubbing his dinner to death. To say he has no knife skills to speak of would be an understatement. Vegetarian Vanilla Ice, aka Robert Van Winkle, is making a farro salad. He's also playing to the camera quite a bit, which causes Guy to come over and admonish him. After all, Guy doesn't want to be upstaged by someone who has possibly even less talent than he does. 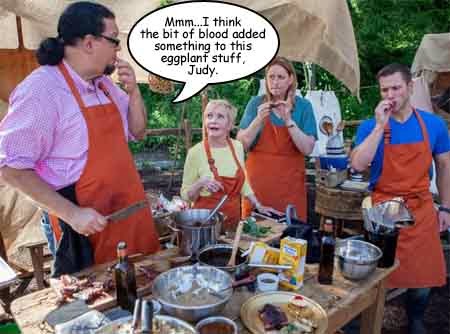 Not soon enough, time is up. Kattan's vegetables are unevenly cooked, but everything gets plated anyway. Everyone is herded back into Medieval Times, where an audience has gathered and Special Celebrity Guest Judge Chef Lee Ann Wong is waiting.

Not only did the celebs have to cook for the crowd, they also have to put on a little skit while dressed in Medieval finery. Guy's team goes first. Without much planning, they figure they'll just improvise. Kattan is their emcee, and as a SNL alum should be able to handle the pressure of the live audience. He's obviously rusty, so they sing instead. 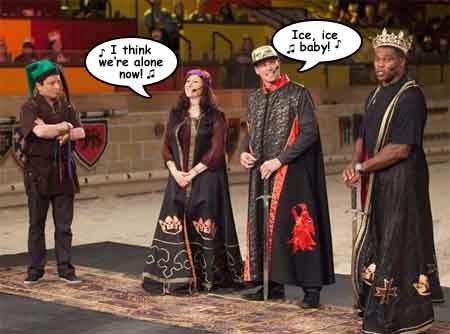 Lee Ann is making some funny faces at the judges' table and I wish the Food Network site included the video for the full episode so I could cap them. Eventually the presentation is over and the eating commences. Vanilla Ice's salad, Tiffany's pork skewers, and Herschel Walker's apple dessert are all complimented, but Kattan's vegetables are unevenly cooked.

Next up is Team Rachael, with Mrs Brady as announcer. Jake Pavelka decides that since there are no roses or hot tubs around, he's got to strip down. Fortunately, someone is wise enough to toss a cape on him, so as not to scare any young children that might be in the arena. 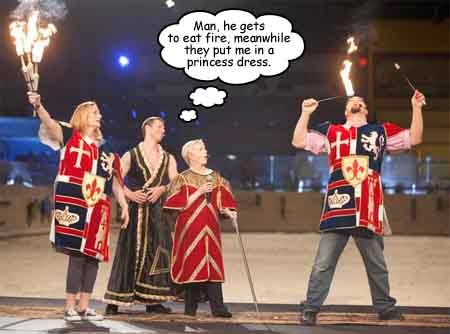 They liven up their skit with a little fire-eating by Penn Jillette. Literally, he eats fire. It's pretty cool, and he admits that it does burn his lips. Mrs Brady's lentil soup, Pavelka's barley salad, and Jillette's steak are all raved over, but Judy Gold's eggplant is a bit too spicy. Like Penn's fire, it burns the lips.

Now, in past seasons of Rachael vs. Guy, the worst performer from each team went head-to-head in a mini blind tasting challenge, the winner of which was allowed to stay on and compete. This season has a format change. 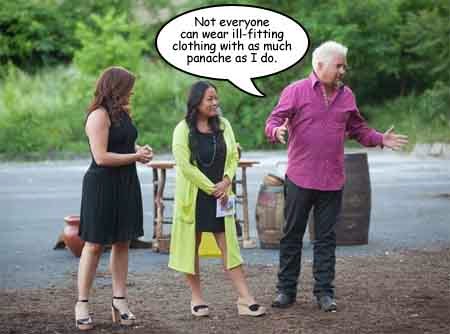 Guest judge Lee Ann Wong first announces the audience's favorite and least favorite dishes from each team. Team Guy's fave was Hershel's apple turnover; the least favorite was Kattan's Vegetables a la Caveman. Penn's steak was the favorite dish on Rachael's side, with Judy's spicy eggplant coming in on the bottom. Then there's an MVP award, which earns the recipient an instant $2500 for her charity. This week, it's Tiffany, who's earned money for The Caring Place. Team Guy is declared the overall winner.

Lee Ann then declares that it's time to kick someone off the show. The camera pans from Judy Gold to Chris Kattan, which confuses me. Despite being on the winning team, Kattan is eligible for dismissal? I don't get an answer; Lee Ann says since it's the first week and everyone should get another chance. No one is eliminated. 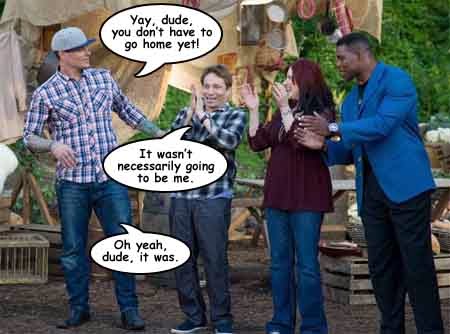 Next week: the celebs have a luau. Mark Murphy is Special Guest Judge Chef Person. Guess he's a luau specialist?