I've been sorta curious about Oyster Bay Grille since it received a measly 1-star from Sun critic Richard Gorelick. Urbanspoon users give the place a 40% positive rating, with only five votes. This prompts me to ask two questions: 1) is it really that bad?; 2) does nobody know the restaurant exists?

When they posted a tasty-sounding menu for Restaurant Week, I thought it was high time we found out for ourselves. Our dining experience was as uneven as expected.

The place is handsome, with dark paneled walls and soothing blue-gray tones. The space is oddly-shaped, however, and the bar area runs the length of the restaurant. Diners looking for a quiet experience will be disappointed when Happy Hour rolls around with its crowd of Loud Talkers and People Who Have to Yell to Be Heard Over Them. (Honestly. Nobody really cares to hear about your crappy job and your idiot boss. Stop drinking so much and shut up.)

We had already determined we would order items from the Restaurant Week menu, but took a gander at the regular menu as well. Ordering oysters at a place called Oyster Bay Grille seemed like a fine idea. We decide on two each of the blue points, Delaware Bay, and Honeysuckle varieties listed on a chalk board in front of the oyster shucking station. Our server immediately ran off to place the oyster order and then lingered behind the far end of the bar until the oysters were ready, rather than return to take the rest of our order. We expected service to be spotty for the rest of the evening, and while we had other issues, our waiter ended up being fine. 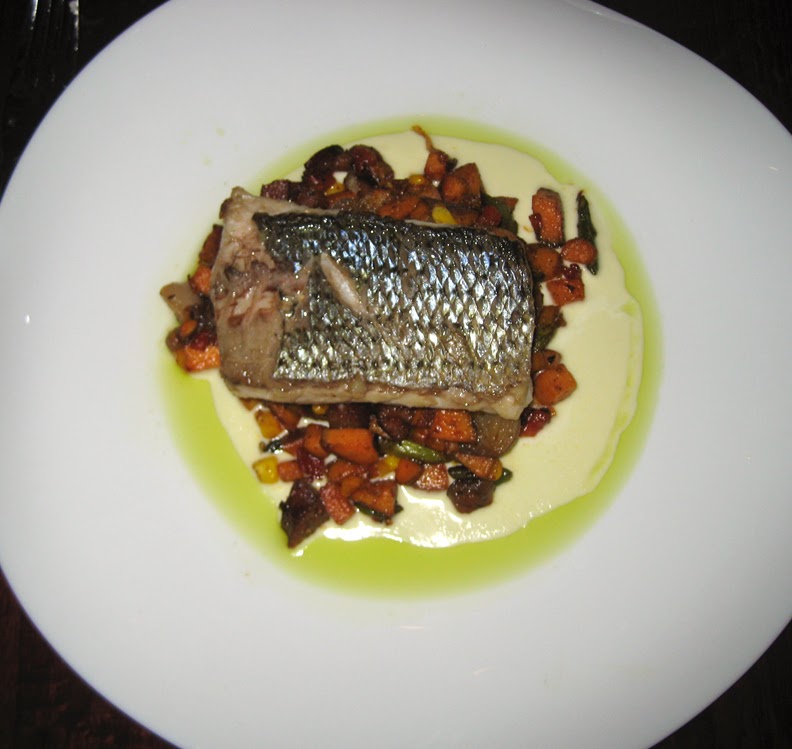 On to the food, which was better than expected from a 1-star restaurant. The man in charge of the kitchen has some skill, which was apparent in the lovely hash of sweet potatoes, andouille, asparagus, and corn that accompanied my fish. However, billed as "crispy-skinned," the rockfish was anything but. It was also unseasoned, but nicely cooked otherwise. 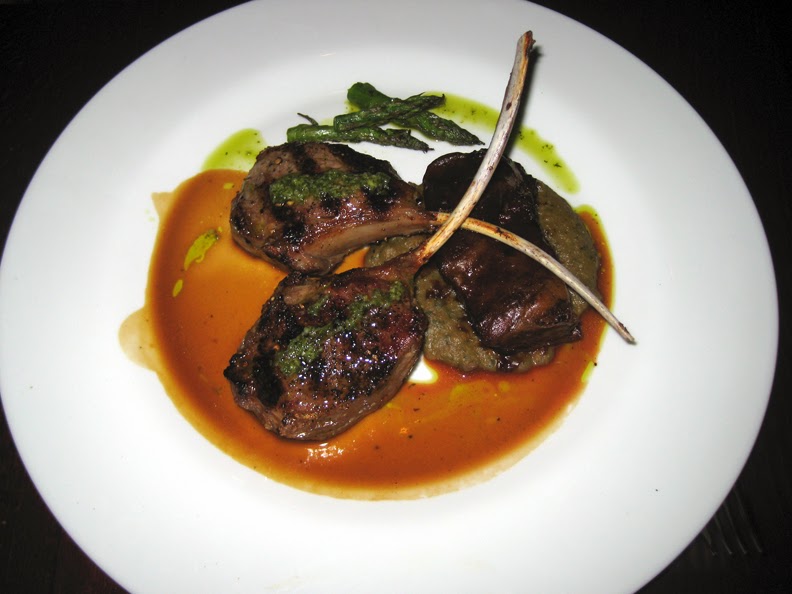 Mr Minx's lamb duo featured two fat and well-seasoned lamb chops and a chunk of fatty lamb belly on a dollop of lentils lightly flavored with cumin. The chops were perfectly-cooked and had a nice smoky grill flavor. I thought it was a very nice dish. 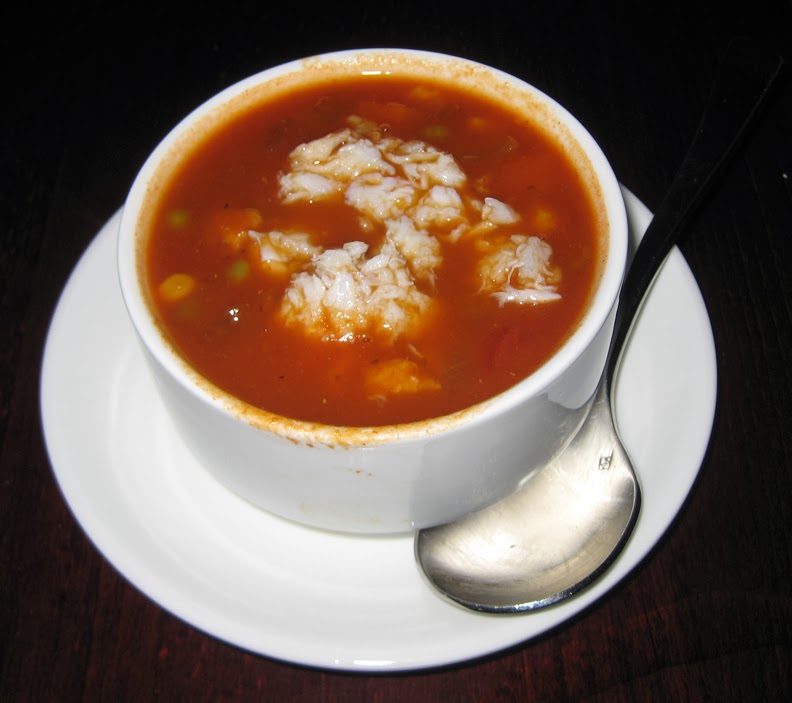 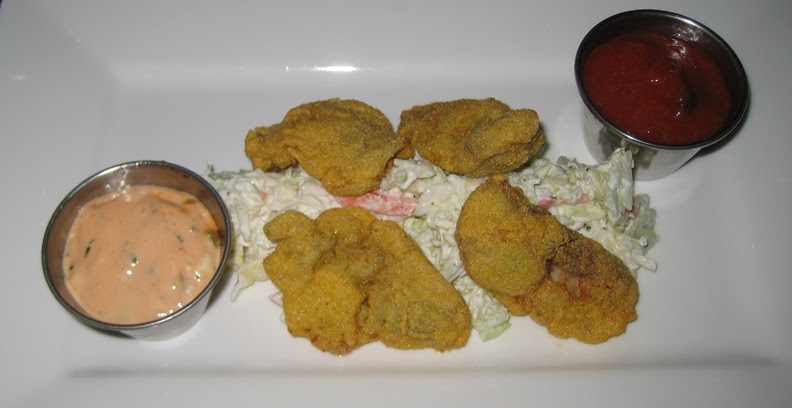 Starters of tomato-based crab soup and fried oysters were fine, if unremarkable. The remoulade that came with the oysters did not taste of the promised goat cheese, but the breading on them was nice and light. The soup needed a bit more spice, but it was pleasant enough. 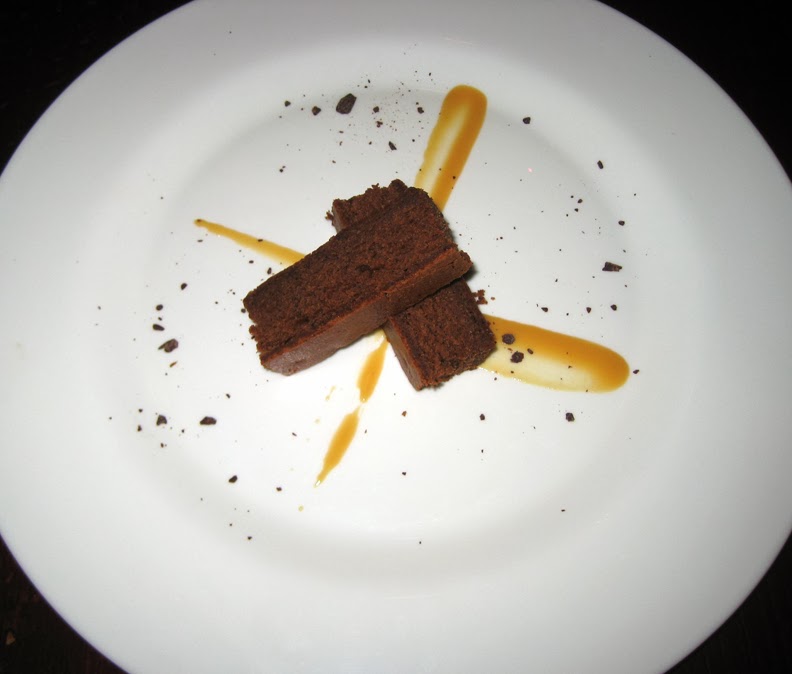 The online menu suggested that a chocolate mousse flavored with Thai basil would be a dessert choice, which was intriguing. Instead, there was a chocolate cake that was like a cross between a brownie and a pound cake, flavored with cinnamon and cayenne, and served with a bit of caramel. The serving was ridiculously small (hopefully a non-Restaurant Week portion would be bigger), but it was pretty good. 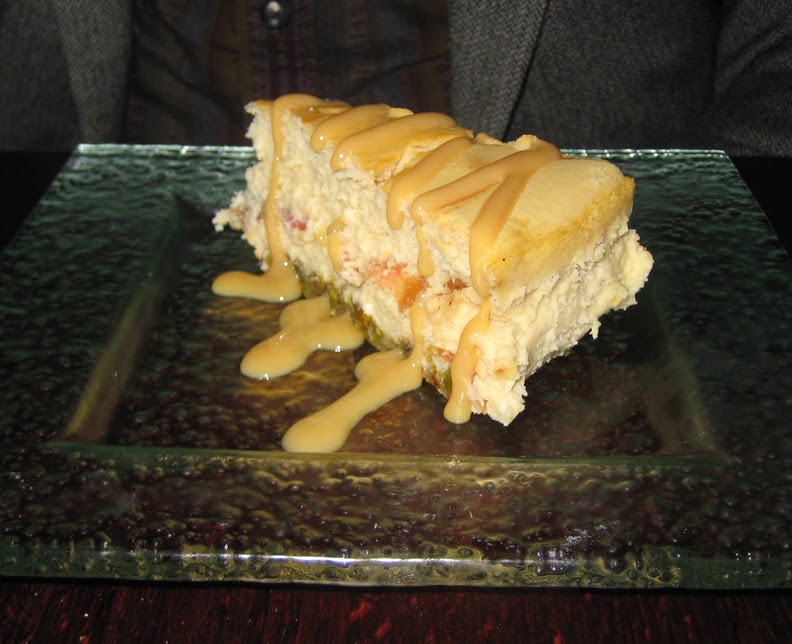 The dessert that was more intriguing, the "candied bacon caramel cheesecake," turned out to be a combination of elements that didn't necessarily work together. The menu listed a pistachio brioche crust, Charlottetown Farms chevre, and goat milk caramel. The crust was indeed nutty and reminded me of baklava, but the cheesecake itself was lemon-flavored, which made the bacon seem like an intrusion. There was no hint of goat (the lemon was too strong), and the sauce on the plate seemed more like dulce de leche than a goat caramel. Take away the lemon, or keep the lemon and remove everything else, and it would have been fine.

So...while the food was good, between the noise level and the oyster incident, the visit was disappointing. Take from that what you will. The place seemed pretty busy, so our staying away isn't going to hurt business any.