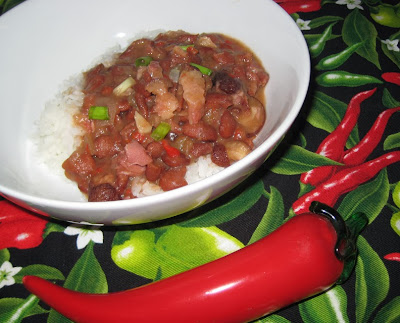 Back in the early 90s, my friend Marshall and I decided to throw a grand Mardi Gras party. We actually expected our guests to wear black tie, because we were pretentious like that, plus we lived in Guilford (with our parents), where most people already own formalwear. But neither of us had any money, so we decided to be frugal with the eats. Red beans and rice is cheap poor people food, but it tastes great, and if we spent the bulk of our pennies on alcohol, who would notice that they were eating stewed beans and ham hocks?

So the two of us spent one early February afternoon cooking up a huge vat of red beans, enough to feed 20 people or more. We carefully packed the beans into Tupperware containers and put them in the fridge for the big day. All we'd need to do for the party is dump it all back in the pot and reheat it, plus make rice. Easy peasy.

But when the day of the party arrived, so did major ice storms. We had sleet for a day or two prior to the party, and on the day of, the neighborhood was glistening with ice. Everything sparkled. Truthfully, it was very pretty. Pretty annoying. Marshall's sidewalks and front steps were glazed with an inch or so of the stuff, and as soon as the buckets of hot water we poured on to melt the ice hit the ground, it froze, too. We didn't have any salt on hand, and didn't want to venture out into the mess to get some. Neither did we want our guests to risk their necks in high heels and evening slippers to attend our fete.

Sadly, we cancelled the party. Not postponed, cancelled. Some of our less-pretentious friends were annoyed that they had to return party clothes to the store, unworn. I had purchased a black, strapless, floor-length gown and was looking forward to showing off my newly-svelt bod. I had purchased it on a deep, deep discount (I think it cost me $36 bucks) so I kept it.

In addition to the the bottles of alcohol we had purchased for the occasion, we also had several gallons of red beans that weren't going to be eaten. Not by party guests, at least.

For months afterward, whenever I got a call to join Marshall and his family for dinner, I knew I'd be facing a feast of red beans and rice. Fortunately, the family had a chest freezer in the basement, and the beans went to live down there until we managed to finish them off. Eventually, it got to the point that I never wanted to see red beans and rice again. In fact, I didn't eat them for 19 years, until I decided to make them for dinner one Sunday evening.

Some recipes involve tomatoes, andouille sausage, and all sorts of extraneous ingredients, but I think it's best to keep it simple: just trinity, beans, and ham hocks.

Place the onion, bell pepper, and celery in a large stock pot with the olive oil. Cook vegetables over medium heat, stirring frequently, until they are softened. At that point, add the beans, ham hocks, bay leaves, and enough water to cover beans by an inch or so. Bring mixture to a boil, then cover the pot and reduce the heat to low. Simmer the beans for 2-2.5 hours, stirring occasionally, adding additional water if necessary to keep beans covered.

When beans begin to fall apart and the cooking liquid has become creamy, the beans are done.

Remove ham hocks and bay leaves. Cut the meat from the bones and chop it into small pieces. Add meat back to pot.

Season beans with salt, pepper, and hot sauce to taste. Serve with white rice and garnish with green onions.