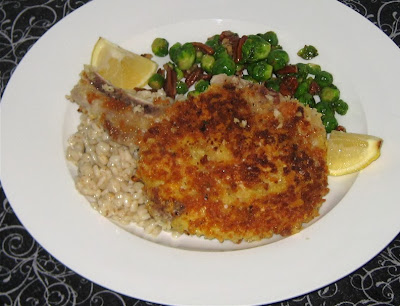 I had purchased some thin pork chops in order to make mini roulades, but then I got lazy and didn't want to deal with making stuffing. Plus the chops had bones. Everyone knows the tastiest meat is attached to the bone, so why remove them before cooking?

I poked around through the pantry and found Trader Joe's 10-Minute Barley. I boiled up some of that and added a few dribbles of heavy cream, a blob of butter, and some Parmesan cheese. It reminded me of risotto, so I decided to go Italian with the pork. They'd get coated with crumbs and fried until crisp, a preparation known as Milanese.

To accompany the meat and starch was our one and only harvest of Brussels sprouts. We put one plant in the garden in April, not knowing what to expect. They took forever to form, and while the stalk grew fairly long, the sprouts didn't get very big at all. The largest was probably the size of the nail on my index finger, and the smallest was about half the size of my pinky nail. Truth! 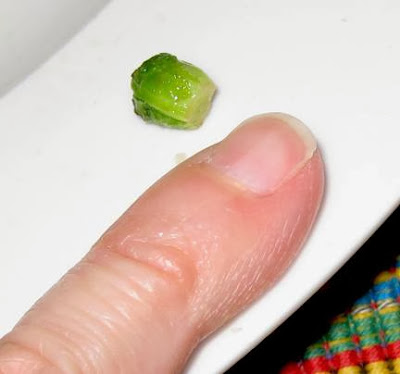 I sauteed them quickly in olive oil with a couple tablespoons of chopped pecans and a sprinkle of salt. I was tempted to add some brown sugar and balsamic vinegar, but really wanted to taste the sprouts.

Pork Milanese (adapted from a recipe from Food & Wine)

Salt and pepper the chops. Mix the panko, cheese, and seasonings and put them on a large plate. Put the flour on another plate, and beat the eggs in a shallow bowl. Dredge each chop in flour, dip them in the eggs, and then coat them with the panko.

Heat a large skillet and add about half an inch of olive oil. When shimmering, add the chops to the skillet (you may need to do this in batches) and fry over high heat, turning once, until both sides are crispy and golden brown, about 4 minutes total.

Drain chops on paper towels, give them a sprinkle of salt, and serve with lemon wedges.