Voting is now open! Please vote for my recipe here.
----------------------------------------------
When I was invited to participate in the Blogger Recipe Challenge, I jumped at the chance. Marx Foods would send me a pound of imported pasta, some porcini mushrooms, truffle salt, and fennel pollen, and I would have to use the pasta and at least one of the other ingredients to create an original dish.

Sounds easy, right?  It is, until you get too ambitious.

The pasta I received was schiaffoni, a wide oval tubular pasta that works best with chunky sauces. But I couldn't not take advantage of the tube shape, which to me resembled wee manicotti. So I decided to stuff them with ricotta cheese and top them with a chunky mushroom bolognese. 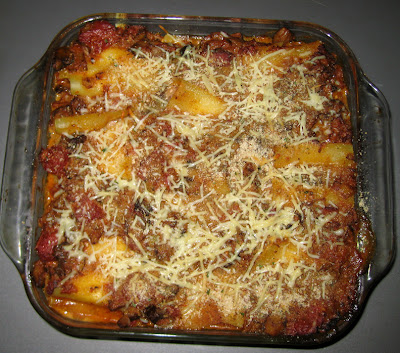 First I had to make the sauce, then I tasked myself with a filling. Both were easy-peasy. What I did not envision was that the nozzle on my brand-new pastry bag would get clogged by a nubbin of goat cheese and send ricotta oozing out through the wrong side. Sigh. So I used a teaspoon to fill the tubes as best as I could. Because the spoon was wider than the opening on the schiaffoni, the noodles that had split up the side while cooking were actually the easiest to deal with. And there were lots of broken noodles, so I used what I could and put the rest away for a later use.

The process was rather messy, but the end result was quite delicious, if I do say so myself.

In a large pot, heat the oil over medium-high heat. Add the bacon and cook, stirring, until browned and the fat is rendered, 4 to 5 minutes. Stir in leek, carrots, and fresh mushrooms and cook about 5 minutes or until everything starts to soften. Stir in the dried mushrooms, garlic, bay leaf, thyme, oregano, cinnamon, and nutmeg. Stir in the tomato paste. Add the mushroom liquid, being careful to exclude sediment, and cook, stirring, to deglaze the pan and remove any browned bits sticking to the bottom. Add the tomatoes and their juices and bring to a boil. Reduce the heat to medium-low and simmer, stirring occasionally, until the sauce is thickened, about 1 hour. Add the cream and butter and simmer for an additional 2 minutes. Season to taste.

While sauce is simmering, make pasta and filling:

Break up goat cheese with a fork. Stir in ricotta, egg, and cream. Season to taste with truffle salt. Cover and refrigerate until ready to use.

Bring a large pot of salted water to a boil. Add the pasta and return the water to a  low boil. Cook, stirring occasionally to prevent the noodles from sticking, until very al dente, 13 minutes. Drain pasta. Immediately dump drained pasta onto a tea towel, separate noodles, and allow to cool.

Put a few tablespoons of sauce at the bottom of an 8 x 8 glass baking pan.

Place cheese filling into a piping bag or a plastic zip top bag with a small hole cut in one corner. Pipe about 1 teaspoon of filling into each noodle, arranging them in rows across the sauce in the pan (3 rows of six). Top this layer with a few more tablespoons of sauce. Continue filling pasta and layering it with sauce until you come to the top of the pan. Cover pan with aluminum foil and bake for 25 minutes. Remove foil and sprinkle pasta with breadcrumbs and cheese. Bake an additional 10 minutes, uncovered, until bubbly.

Spoon pasta into serving bowls. Top with a few pieces of scallion. 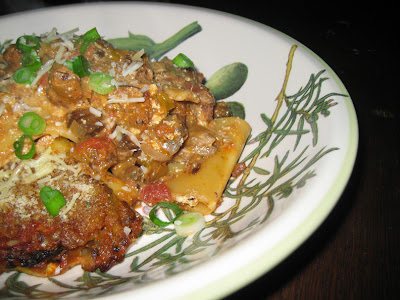