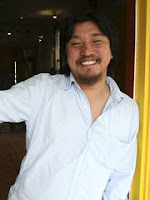 Did anyone catch the most recent (11/7) episode of Iron Chef America?

While I am usually not familiar with the visiting chefs from week to week, I was excited to see that the challenger this time around was Edward Lee, of 610 Magnolia in Louisville, KY. I've never been to his restaurant, but I have eaten his food: he was the feature of a rather long article in the penultimate issue of Gourmet. An interesting read, it provided me with the recipes for two items he prepared on Iron Chef, sauerkraut soup and black barbecue sauce. I can attest that both dishes were as delicious as they were unusual. 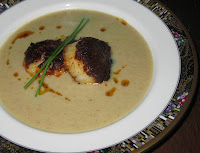 On the show, Lee added black garlic as a riff to his original kitchen-sink concoction. I've made the stuff several times already, and just so happen to have a few cloves of black garlic hanging around; seems like it's high time to cook up another batch.
Posted by theminx