The short rib recipe may go into my cookbook, so I can't share the details. Suffice it to say that they were cooked for about 5 hours and were fork tender and extremely delicious. Perhaps my best effort yet. Dad is always talking about how much he loves the short ribs at Roy's, so maybe now he'll rave about mine, instead. 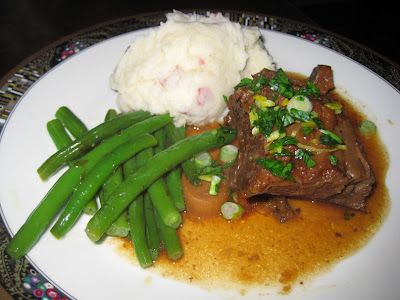 The cake recipe, however, is based on one I found on teh Innernets. I modified the recipe a bit and used four kinds of milk, so technically it's a pastel de cuatro leches.

Separate eggs. Whip whites with an electric mixer until soft peaks form. Stir sugar into yolks and whip until thick and pale yellow. Stir in about 1/3 of the egg whites into the yolks to lighten them, then gently fold in the remaining whites.

Sift flour over the eggs. Gently fold flour into eggs just until there are no obvious streaks of flour.

Butter a 13 x 9 glass baking dish. Pour batter into the dish and bake until cake is golden, about 20-25 minutes. Cool cake for about 15 minutes.

Whisk together four milks and pour mixture evenly over cake. Cool cake for another hour or so, then cover and refrigerate several hours or overnight.

Place pineapple, its juices, butter and brown sugar in a saucepan. Cook over medium-high heat until most of the juices have evaporated and the mixture has thickened. Stir in cinnamon and remove from heat. Allow to cool before serving. 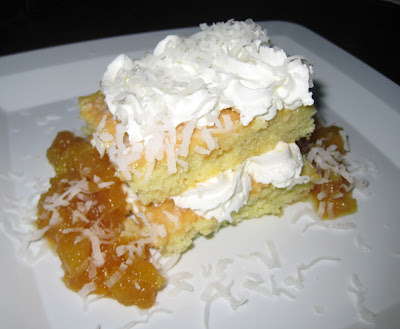 The pan I used was slightly bigger than 13 x 9, so the cake was fairly thin. To solve that problem, I stacked two slices with whipped cream in between. It was delicious (not as good as the cake at Talara) - but very sweet.

Everyone seemed to enjoy the meal, especially Dad. Happy birthday! May you have many more. :)
Posted by theminx