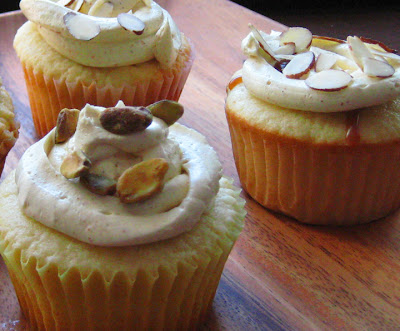 Oddly enough, I've never made cupcakes before. Muffins, sure, but not cupcakes. You might ask, "what's the difference?"

I'm not a big fan of frosting. I don't like the tooth-aching sweetness of most varieties, and I am especially offended by the gritty texture of confectioner's sugar against my teeth. I do, however, like a good French or Italian buttercream but the thought of making a meringue and sugar syrup is extremely intimidating. I am not, after all, a pastry chef (nor any other kind of chef for that matter, although in the privacy of my own tiny kitchen, I like to pretend that I am).

And then I read Wendi's post about buttercream frosting made with marshmallow fluff and a relatively tiny amount of confectioner's sugar. Suddenly the "no cupcakes" restriction in my brain was lifted and replaced by motivation to enter the Scharffen Berger Chocolate Adventure Contest again this year.

I can't reveal the recipe here, not at this time, but I will say these quite unusual cupcakes turned out better than I imagined. They don't look like much, but they were bursting with exotic flavors in not only the cake but also the filling and the frosting. Yes, I used Marshmallow Fluff - we just so happened to have about seven ounces hanging around the house - and it produced something remarkably akin to a fussier frosting made with egg whites.

But much, much easier.

My brain is now virtually bursting with cupcake recipes. I even dreamed about them over the weekend. Looks like Marshmallow Fluff is going to become a really good friend over the next several months. 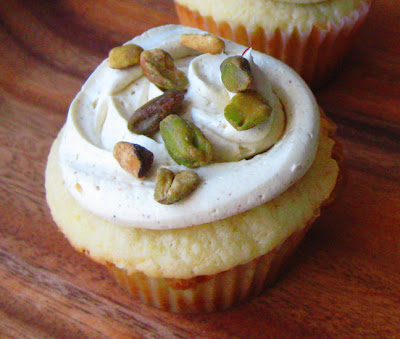 I love that you love the frosting. I've done cooked egg white frosting before and it is fussy. This one is so much more user friendly. I now keep a jar of marshmallow fluff in the house so that I can have this frosting at a moment's notice.

Good luck with the contest.

They have the big plastic buckets of Fluff on sale at our Superfresh for $1.99, so we now have enough to make four batches of frosting.

So intrigued by what flavors you chose for your cupcake! I too entered the contest and am now googling around trying to find other contestants so we can band together in solidarity as the waiting continues... :)

On a buttercream note (I too a grossly offended by the grit of powdered sugar against my teeth), I always make Swiss buttercream, since you don't have to make a syrup. Just put the whites/sugar over a water bath till they're hot, whisking only occasionally. Easy!

Good luck!! I can't wait to hear what flavors you put to use.