The other evening, while out for sushi, Mr Minx and I tried something called a crispy oyster roll. The oysters had been coated in panko and fried, and each slice of roll was topped with a bit of Japanese Worcestershire sauce, aka tonkatsu sauce. I hadn't eaten tonkatsu in ages; my Dad used to make it fairly regularly when I was a kid but I haven't had it since. And wouldn't you know it, there was a bottle of tonkatsu sauce in the fridge. (I have no idea what I had used it for.)

Tonkatsu is extremely easy to make: dip pork chops in flour, then in egg beaten with a bit of water, then in panko crumbs. Fry in a bit of oil until brown and crunchy. Top with sauce and eat. 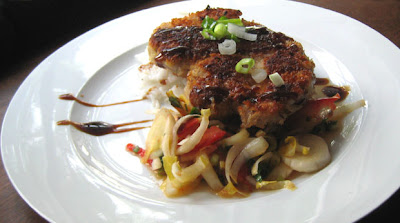 I served it with some white rice and a salad that Mr Minx dubbed "Belgian endive kimchee" - thinly sliced Belgian endive, slivered tomato (seeds removed), chopped scallions and cilantro, and a dressing made from rice wine vinegar, honey, sesame oil, ground ginger, and salt & pepper.
The tonkatsu came out nicely browned and the relatively quick cooking kept the pork moist, but I think I enjoyed the kimchee best of all. The bitterness of the endive played very well with the sesame oil and vinegar. Next time, I'll add some garlic to make it closer to real kimchee.
Posted by theminx

I have everything but the tonkatsu in my stock. Assume I can buy that at any Asian store? Do you just mix the dressing to taste, or do you measure?

I would think you could buy tonkatsu sauce at any large Asian store, like H Mart.

As for the dressing, I did it mostly by taste. About a tablespoon of vinegar, 2 tsp of honey, and everything else a dash here and there.