Yesterday was Thanksgiving and we had our annual feast of starch and tryptophan, with a goodly measure of vegetables and alcohol. Every year we descend on my Mother-in-Law's house with vegetables and pie, homemade cranberry sauce, and gravy fixins. Minx MIL provides the starches and the roast beast, BIL the stuffing, and Minx Brother brings the beer.
Click images to enlarge. 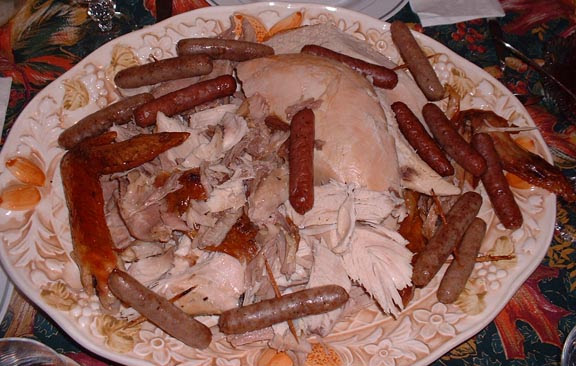 This year the turkey got cooked in an electric roaster, which really freed up the oven for heating the classic green bean casserole, the stuffing, and the sweet potatoes. No, those are not multiple penises on the turkey. My in-laws like to arrange sausage links on the top of the bird for the last half hour or so of roasting, presumably for basting purposes. It looks like the creature is getting a perm and wearing rows of hair rollers (sorry I don't have a pic of that!) I hate sausage links, but everyone else gobbles the horrid things up. 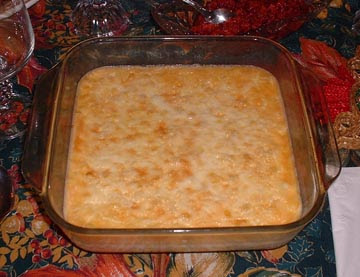 Here's my corn pudding in all its browned glory. It's a simple blend of three eggs, one cup of heavy cream, the kernels of 6 ears of corn (or a whole bag of frozen kernels), and a bit of salt and sugar. Bake for 1 hour at 350F. The recipe was given to me by a woman I never have liked. Still don't, but I make this stuff every year even though it reminds me of her. I bake it the day before and then heat it up in the microwave for about 4 minutes before serving. 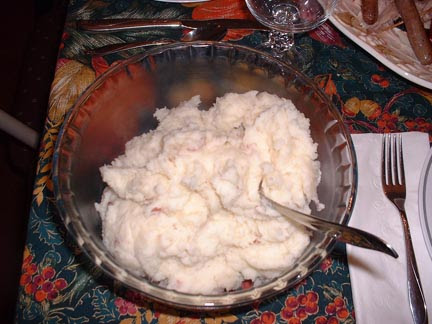 Minx MIL cooked up a few pounds too many of the taters this year. We have mash coming out of our ears. Not that we're complaining! 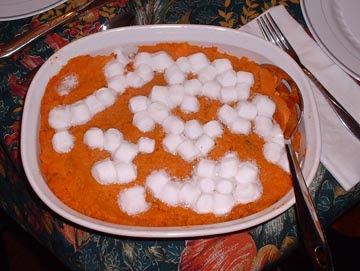 It really makes a difference when one uses fresh sweet potatoes rather than canned or frozen. There's no need to add crushed pineapple to kill the canned flavor (as we used to do), and marshmallows can be kept to a minimum. 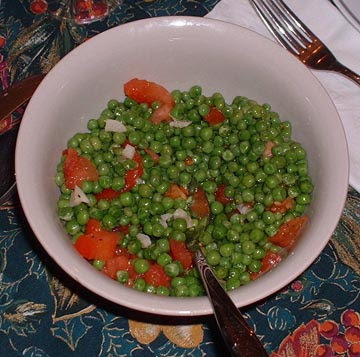 My MIL's friend Wayne likes peas, so she makes peas. These were sauteed with a bit of garlic and a small tomato, chopped. The garlic really makes itself known in this dish, particularly since almost nothing else on the table contained it. 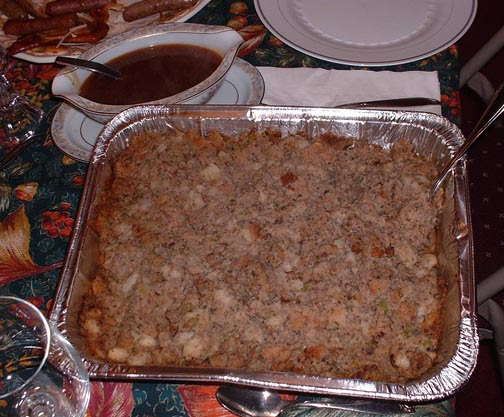 My BIL makes really great stuffing with sausage and giblets. The gravy I make by cheating with a jar of Williams-Sonoma turkey gravy base and adding a cup or so of drippings. It's really delicious, and so rich it probably could be eaten on roast beef. 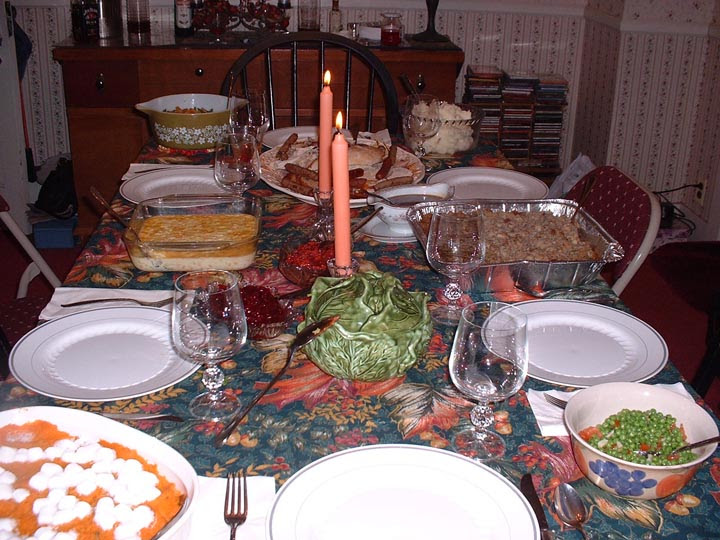 Here's a view of the table. When my DH was taking photos of all the dishes, he missed getting individual shots of the sliced brussels sprouts steamed with lemongrass oil (in the sprout-shaped dish), the green bean casserole (end of table, top left) and the dishes of cranberry sauce (behind the sprouts). He's not a fan of cranberries, and that's probably why he omitted them. This year, I made two kinds - my standard raw version (two whole clementines, peels and all, seeds removed, half a bag of fresh cranberries, and about 1/2 cup sugar, a dash of cinnamon, all ground up in the food processor) and a cooked variant with red pepper jelly, cumin, cinnamon, cardamom, cloves, sugar, and a bit of rice wine vinegar to make it chutney-esque. 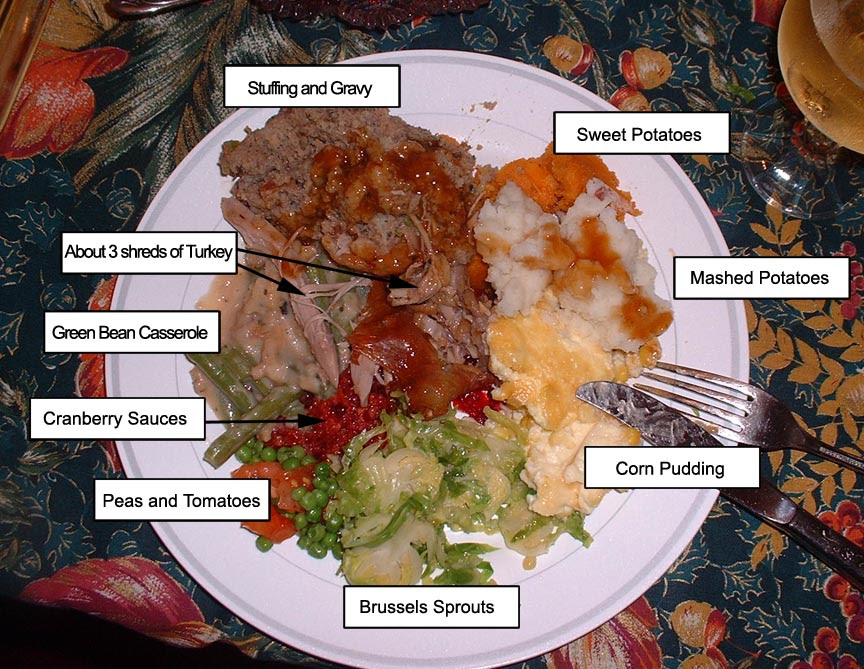 My favorite part is the side dishes, as I could really live without turkey. I'll eat it, but it has never been a focus of any meal for me, as evidenced by this photo. 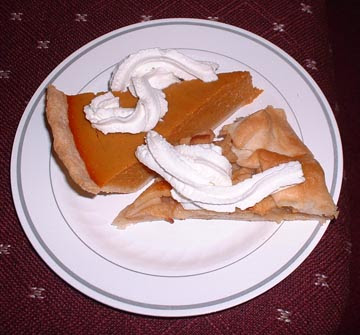 I intended to make an apple galette but to buy the pumpkin pie. When we found the grocery store was out of them, we made one with canned pie filling. It was good, if a bit sweeter than I would have made it. The galette had thinly sliced golden delicious and granny smith apples, a bit of sugar, and some cinnamon, folded up in a refrigerated pie crust. After it came out of the oven, I glazed it with some mango preserves heated up with a little maple syrup. Both were a bit on the lazy side, but the results are what counts, right?
We wash the meal down with shandies (a mixture of beer and fizzy lemon soda, or as this year, ginger ale) which comes from the British side of the family. Before dinner, everyone but me partakes of Manhattans. By the time dinner is over, both the turkey and the alcohol have taken over, but the clean up takes precedence over napping! Once all that is done, we retire to the living room to jeer the football game and chat and/or fall asleep.

A good time was had by all, and I look forward to doing it again next year!
Posted by theminx