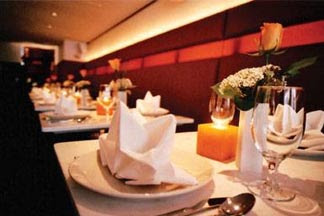 Sadly, since our favorite Thai restaurant closed some months ago, Mr. Minx and I have not been able to properly satisfy our jones for Thai food. Sure there are other restaurants nearby, but none of them are particularly good to our liking. So when planning our weekend in Manhattan, we were sure to include a Thai restaurant on our dining agenda.

Prem-On Thai, the fifth New York restaurant of Thai chef/restaurateur Prakit Prem-on, opened in 2005 to favorable comments from the Times' Frank Bruni. I liked the look of the Web site, and the menu looked promising and reasonably priced, so we made a reservation.

The weather had been less than stellar that Friday, rainy and steamy hot, but by evening it had cooled down enough to make sitting by the open front windows at Prem-On pleasant. We started our meal with the two soups on the menu - Tom Yum Goong (a spicy broth with shrimp, lemongrass, and mushrooms) and Tom Kah Gai (coconut milk-based chicken soup with galangal, kaffir lime, and mushrooms). The former, served in a stone mortar, was rich and delicious, with an intense broth spiked with chiles. The coconut soup came in a mere bowl, but the flavor was equally deep, if less-spicy. Probably the best versions of these classics that I have ever tried.

We next tried an appetizer sampler consisting of spring rolls, dumplings stuffed with chicken, peanut, and radish, and another dumpling, Kanom Jeeb, stuffed with chicken and seafood with garlic. The spring rolls were nothing to write home about. Both varieties of dumplings were delicious, however, but suffered from too-thin wrappers or too much filling, as they were nearly impossible to pick up without bursting their contents onto the plate.

Now comes the duck. Mr. Minx and I both love duck, and if it's on a menu, one or the other of us will order it, almost without exception. At Prem-On, we both opted for duck entrees. The sauce on his Duck Panang Curry was full of chile flavor yet was not overtly spicy; string beans and slices of pumpkin added their vegetal qualities to the generous portion of well-roasted, fat-less, mostly-boned duck. I went for the Thai Orange Duck - another generous portion with a not-too-sweet orange sauce with orange segments and curious flat deep-fried objects that I determined were eggplant. There was too much batter on the eggplant and the sauce rendered them into soggy blobs of flannel. Although my duck itself was good, it was only half as good as my husband's entree, and I almost wished I had ordered something else. But I couldn't resist the multiple duck options!

All of the above was washed down with Thai iced teas and many glasses of water. The fancy Thai-tini-type cocktails looked interesting, but tea had more allure.

A pretty decent meal, overall, that made us miss our local Thai joint all the more.