I know, I know - you're thinking that we should change the name of this blog to "Stuff Cyrus Keefer Feeds Us." And maybe we should. We've covered his cuisine at Fork & Wrench, his Pique pop-up, and at his most recent gig, 13.5% Wine Bar. And we're doing it again. This time, we were invited to a media tasting, which meant we would get to try several more of his dishes than the two of us would normally order on our own.

13.5% Wine Bar has really embraced their new chef. For one thing, notice the recently added "+ Food" in their name. While it's still a great place to enjoy a glass or three of vino, the food game has been stepped up considerably. It's now a place that even non-wine-drinkers can enjoy (they have cocktails and beer, if you're still into the booze). The restaurant is bigger, with table seating for 70, 20 additional at the bar, and al fresco dining, too, courtesy of the new retractable facade.

But we were there for the food, so let's jump right into it. Here's the current menu, for your perusal. 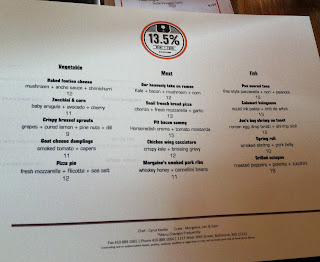 Cyrus started us with an off-menu app of tuna and tomato crudo with miso poached mozzarella. The mozz and tomato made it a bit like a Caprese, but with tuna instead of basil, and the chef's customary touches of Asian flavors, like kombu. This dish hit so many flavor points - tangy, sweet, umami, salty - and I would love to see a larger version of it on the menu. 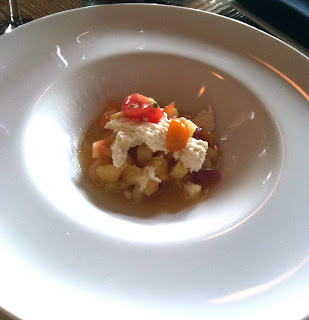 We had two types of pizza next, the "pizza pie," which had classic pizza flavors and aromas on a crust of pate brisee, or regular pie crust dough. The other was a French bread-style pizza topped with snails and chorizo. The two versions were as different as night and day, the "pie" version light and fresh (despite the very buttery crust) and the other rich and garlicky. Not expecting to get so much other food, we each ate two slices, almost (but not quite) regretting it later in the meal. 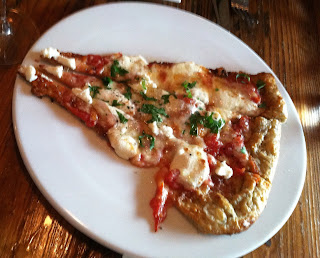 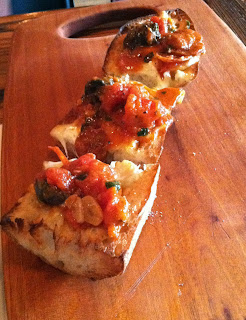 Then came a salad of sauteed zucchini, white corn, and baby arugula with fresh cherries and avocado. The vinaigrette showed off the chef's talent with such sauces, being both savory and acidic, with the lightest kiss of black truffle oil. While I normally don't see the point of white corn, especially the tiny kerneled-type, here it punctuated the salad with juicy bursts of texture. 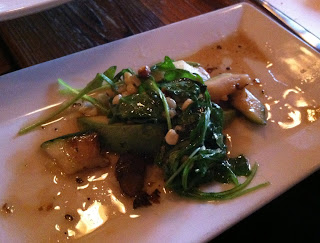 We also tried the tender and cheesy gnocchi-esque goat cheese dumplings with smoked tomato caper sauce and the sous vide octopus with a similarly smoky red pepper sauce, zucchini puree, and polenta. My palate doesn't enjoy smoked + some non-fish seafood, but the octopus was so fork-tender, I ate it all anyway. 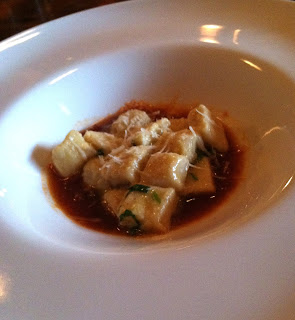 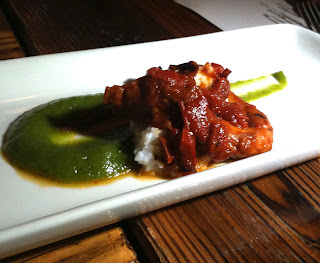 So. Much. Food. And we're not done, folks! We also tried "our heavenly take on ramen," which was on the menu the last time we ate at 13.5%. (If soft shells hadn't also been on offer, I would have ordered it.) The soup takes elements from traditional Japanese tonkotsu and Hokkaido-style broths by using both pork (in the form of house-made bacon) and corn (a corn dashi). The genius noodles are actually house-made linguine with baking soda, to give them a very ramen-like bite. There's also a soft-boiled egg, kale, and mushrooms in the mix. There was no way I could finish the dish, so thank goodness for doggie bags. 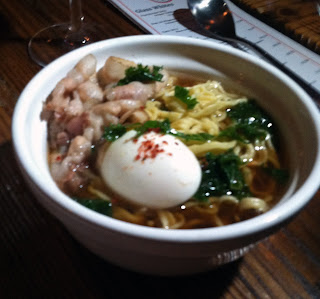 Our last item, which I didn't photograph, were the pork belly and smoked shrimp spring rolls we had eaten before. They were lovely then and still lovely today, even though I had to eat mine slightly soggy at lunch the next day. Best spring roll in town though.

Whew. Lots of food. No room for Morgaine Brunn's desserts (which could have been a wee peach ice cream-stuffed almond macaron, were we not stuffed). Lots of excellent flavors and textures, too. Cyrus has some great and clever ideas floating around in his head, and the ability to execute them.

The whole purpose of this post is to continue to get the word out about the new focus on food at 13.5% Wine Bar + Food. If you don't go, I'll just have to post again in the future. You are forewarned.