We were writing a round-up of pizza restaurants for a future issue of a local magazine when we realized we should try Hersh's in South Baltimore. We've heard mixed reviews, mostly good, but one of my co-workers, a now unhappy once-frequent customer, had put me off going there for a while.

Fortunately, his experiences were not repeated on our visit. We loved Hersh's.

We got there at the moment they opened at 5pm and took advantage of the 2 10-ounce draft beers for $5 happy hour deal. The only catch is that both drinks go to the same person, at the same time. So Mr Minx and I ended up with four beers on the table at once.

We tried the Brewers Art Sangreale, which was ok, and the Harpoon Summer beer, which had little or no character or flavor at all. That said, it was still better than Bud. 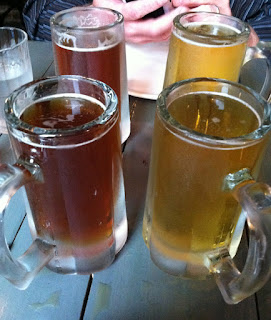 We were there primarily for the pizza, but couldn't pass up ordering an appetizer. The crispy chicken skins tossed with spicy fennel relish and smoked salt were outstanding - super crunchy slivers of deep fried chicken skin, somewhat like pork rinds but lighter. They were bracingly salty, with a nice hit of acid from the relish. A terrific bar snack. 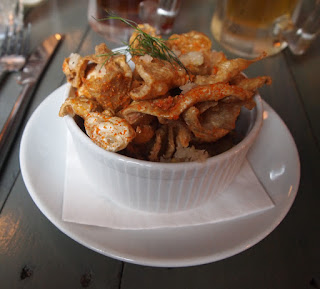 I had mentioned to our server that it was our first time at Hersh's, so she bought out a complimentary dish of fresh spring peas barely cooked in butter and garnished with fractal-like dollops of housemade creme fraiche. She wanted us to see what the kitchen could do, which was a nice touch. The peas were very fresh, not at all starchy, and paired really well with the crispy skins. So far, so good. 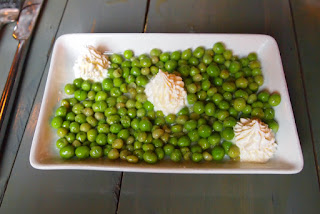 Then our pizzas came.  Mr Minx went with the Tre Porcellini (aka, the 3 pigs). The thin, well blistered and charred Neapolitan-style crust was topped with a trio of porky items (sausage, braised pork, and guanciale), along with provolone, garlic and red pepper flakes. It was, as frequent Minxeats commenter Liz says, "perfection." Mr Minx was in, er, hog heaven. Apparently, Hersh's pizza is the pizza he's been searching for since childhood. After the advent of commercially prepared "fresh dough" pizzas in the 70s, pizzas like these, with real character and flavor were, nearly impossible to find in the Baltimore area. Many of the newer pizza places that have popped up in recent years, while really really good, haven't been close to his Holy Grail. 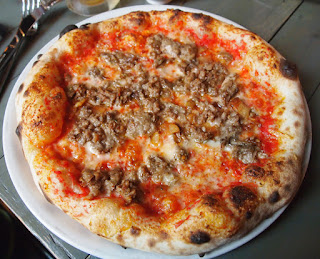 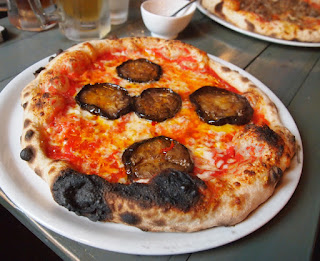 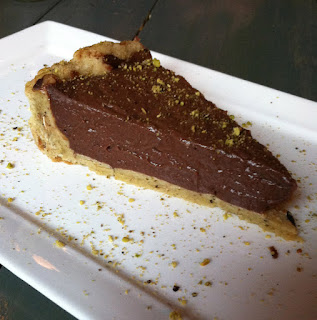 We shared a piece of chocolate and pistachio cream pie for dessert. Both filling and crust were on the dense side, so we were glad to have shared it, otherwise it would have been too much.

While Hersh's is on the opposite end of town from where we live, I think we'll probably end up going there fairly frequently in the future. Parking was surprisingly easy, service was great, and Mr Minx found his Holy Grail. What's not to like?