I'm occasionally amused by the way restaurants view themselves. Fatty Crab, a Malaysian-influenced restaurant owned by a non-Malaysian, Zak Pelaccio, seems to think it's a "joint." The Web site makes the place seem really funky, but it's just a small Meatpacking-district restaurant with tall front windows and a menu with lots of interesting and tasty stuff on it. Maybe we ate early, and the funky/joint stuff happens after dark. I'll never find out, nor do I particularly care. I have never been a scenester, so vibe isn't nearly as important as the food, and the food was good.

My semi-regular NY dining companion, David, and I chose to split three apps and one entree. We got the green mango and papaya salad, which was the typical Thai-style salad with chili, lime, and peanut. It was tasty, but not the best version I've had. The mango wasn't particularly green, but it was appropriately fiery. 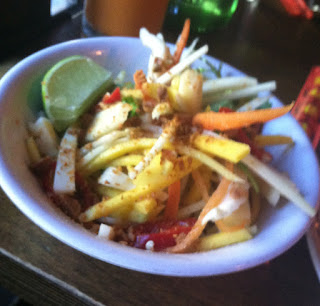 Next up were pork belly buns served with a sriracha soy sauce and a cilantro salad. These were really nice, with tender fatty pork and nicely pillowy buns. The pork was flavorful enough without needing the sauce, and the cilantro salad added a bit of herbaceousness to cut the fat. 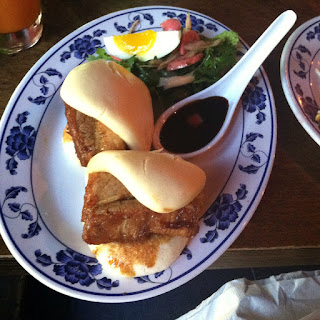 Not to be redundent, but we also tried the Fatty Sliders, made from a blend of beef and pork with sambal aioli and caramelized onions on potato rolls. The aioli was incendiary, but the burgerettes are something I'd love to replicate for one of summer's many grilling occasions. 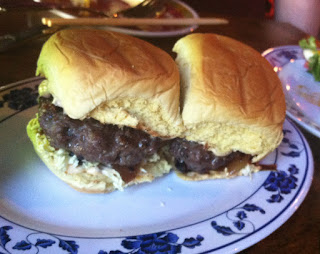 Finally, we had the beef rendang, which was gorgeous. Short ribs had been braised forever in a mild lemongrass chili sauce and served with coconut rice and a side of pickles. So much better than the local version I had earlier in the year, I wished I didn't have to share this dish with someone else. 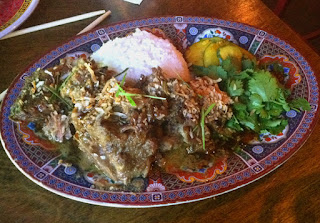 We didn't order dessert, but were brought little squares of sweet glutinous rice cakes, which were delish.

There are lots of other interesting items on the menu, including chili crab (with Jonah or snow crab, at either 45/60 bucks - a little rich for my blood) a clay pot chicken, a Malaysian fish fry, and Szechuan pepper lobster.  Maybe next time I'll splurge.