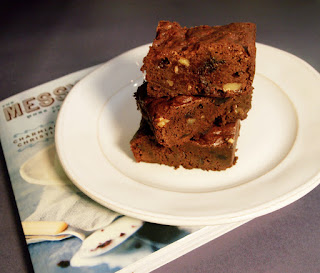 Regular Minxeats readers have to know that I am obsessed with brownies. Obsessed. (Well, not really, but that's one of those words you young'uns use all the time, regardless of its actual meaning. I'm trying to be hip with the lingo.) I've tried many brownie recipes over the years, and posted a good many of them here, including one abomination made with Splenda and black beans. (Go ahead, read that post. It's one of my favorites. Read the comments, too, while you're at it.) My all-time favorite brownie recipe is the one found on cans of Ghirardelli Sweet Ground Chocolate and Cocoa. The large sugar-and-fat to flour ratio makes for brownies that are gooey and messy, as opposed to cakey. (I suppose cakey brownies have their place, but why not just eat cake?) Mmm. So good.

I must confess that when I saw The Messy Baker: More Than 75 Delicious Recipes from a Real Kitchen in my Amazon recommendations, I put it on my wish list solely because of the cover photo. Of brownies. Deep Dark Cherry Chipotle Brownies, no less. (Yes, that's the link to the recipe on her blog. No need for you to buy her book, too, unless you want all of the other goodies inside.) Nobody purchased the book for me last Christmas, so I took it off the wish list and put it in my shopping cart. In January. But I didn't pull the trigger to buy it until August. Of course, the first recipe I tried from the book was for those brownies.

At first taste, when they were just a bit warm, I wasn't sure of the texture. They're very fudgy and dense. Which is fine, better than cakey, but not as gooey as I like. So I refrigerated them, and that made all the difference in the world. Cold from the fridge, they are like candy. Chocolate candy crack. They are spicy, but not too (and I added the full teaspoon of ground chipotle) and fruity from the cherries, which does help cut back the heat. I also added some walnuts, to add a bit of crunch, plus I like walnuts in my brownies. They are really, really good. Really good.

I think I found my second-favorite brownie. Try them. If you don't like spicy, then skip the chipotle, substitute ancho instead, or leave the pepper out entirely. And eat them cold, straight from the fridge, with a glass of milk (or a bourbon, if you're me). You won't regret it.