Several years ago, the Minx and I were wandering through an Indian market looking for exotic things to cook with. The lady behind the counter asked if there was anything in particular we were looking for. We replied, "no," but she started naming some Indian products we might be interested in. "Some ghee, perhaps?" The Minx's eyes lit up and she gratefully allowed the woman to lead her to the aisle with the ghee in it. After we left, I asked, "What is ghee?" She said, "It's like clarified butter." I thought she was going to say something more interesting considering how excited she got about it. It wasn't until later that I realized how versatile the product can be. 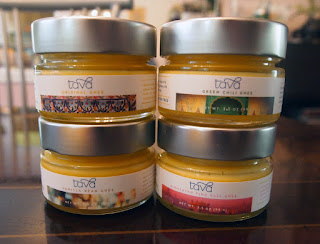 Traditional clarified butter involves removing the liquid from butter through simmering and also separating the fat from the milk solids. Ghee retains the milk solids that are caramelized in the simmering process. Therefore, ghee has a nutty flavor and aroma. You can also flavor ghee for different cooking applications. Ghee is a staple of Indian cooking, but it can be used in virtually any cuisine as a replacement for butter or oil.

Recently, we received some samples of a new ghee product. Tava Ghee is an organic, gourmet, flavored spreadable butter that comes from 100% grassfed cows. Created by founder Raquel Tavares Gunsagar in her kitchen, she quickly turned her product into a highly successful business. Tava Ghee has since moved from Raquel’s home to a factory kitchen in downtown Los Angeles.

Along with the original ghee, there's also vanilla ghee, green chili ghee, and Himalayan pine salt ghee. We used the vanilla ghee in place of some of the butter in a chocolate cake to enhance the vanilla flavor. I even ate it on crackers. The vanilla flavor is subtle but pleasant, and there's no sugar added, so don't expect it to be sweet. I also used the green chili ghee for some shallow frying of my hand-cut French fries. I only seasoned the fries with salt and garlic powder, but the chili flavor from the ghee added a spicy element.

Tava Ghee is steadily popping up in specialty grocery stores across the country, but if it isn't sold in a market near you, you can order it directly from their web site.