Although we'd written about Hampden's 13.5% Wine Bar not all that long ago, we felt we had to visit and write again, now that Cyrus Keefer was running the kitchen. We knew Cyrus from his delicious work at Fork & Wrench, and we supported his efforts to open his own Hampden restaurant, Pique. That didn't pan out, but we're happy that he did end up in the neighborhood. He's doing his own thing at 13.5% which means clever techniques and lots of big flavors with a touch of Asia here and there. 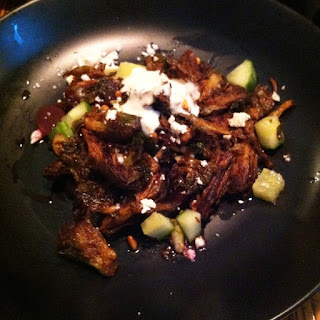 We also tried the lamb meatballs, which were delicate and very juicy. They also came on a flaming hot plate that the runner did not warn us about. Consequently, I burned my fingers moving the plate because my OCD needs everything to be centered if it can be centered. So, you are forewarned. However, the balls were great and we could have eaten more. 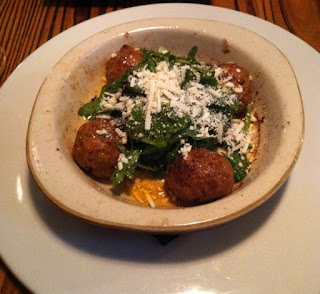 Because we're piggy like that, we also ordered the pork belly spring rolls. The tender pork was bound with shrimp puree, which gave the rolls a briny fragrance and a dense meaty texture. They weren't much to look at (hence no photo), but they were lovely in flavor and had a nice crispy texture.

For his entree, Mr Minx enjoyed the squid bolognese, which was both expected and unexpected. Expected in that it was a straight-up sort of tomatoey bolognese sauce, unexpected in that the pasta was a tagliatelle made with squid ink. The dish was topped with a tangle of barely-cooked squid that had been cut to mimic the shape of the pasta. Mr Minx dispatched it post haste (after sharing a few bites with me). 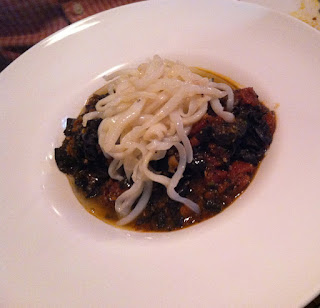 I also liked my dish, a "congee" made with barley and creamed corn, topped with a wonderfully meaty soft shell crab, and fried mushrooms. The creamy and crunchy textures plus the flavors of land and sea were a delight to my palate. My only issue with the dish is that it had a few too many chili threads on top. They're fine, flavor wise, but not necessarily texturally.

I have been eating a lot of soft shell crabs recently, because it's the season and because I usually feel deprived of them. Cyrus' version was one of my top 5 ever. It didn't hurt that they were the plumpest, meatiest, crabs I've encountered.

We didn't order dessert, but the three or four on the menu looked like they had potential. Next time. And next time we'll be sure to get octopus (Cyrus does wonderful things with the cephalopod) and I am curious about his taken on ramen as well.

13.5% has just revamped their front, opening it up wide and adding outdoor seating. The extra light and warmth should be popular now that summer is finally here.