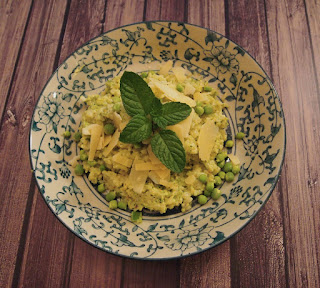 We got two pounds of organic sugar snap peas in our farm box not long ago, which is a lot of peas. I suggested that Mr Minx make a cold salad with some of them because I really prefer my sugar snaps raw. He brilliantly threw together the peas, roughly chopped, some cucumber, and tons of mint, with a Asian-style dressing. Wow. It was so good! Sweet, crunchy, refreshing. I really loved the combo of mint and peas and decided that it would make a fine pesto-type concoction. So on the weekend, I cleaned the other pound of peas, picked some of our proliferating mint, and dug a handful of pistachios out of a bag of deluxe unsalted mixed nuts. No cheese, no garlic. I just want to taste the peas and mint, with a little earthy nuttiness for balance.

So what to do with what ended up being a pinto of pesto?

I decided to stir it into a risotto. I planned to make the risotto for dinner on one night, then to  make fried chicken (my first time) on the other. But then I was lured away from the kitchen by a soft shell crab po' boy and had to make both the risotto and fried chicken on the same day. I didn't want to stir risotto while a freakishly hot cast iron skillet full of grease and chicken parts bubbled away like a witch's cauldron  mere inches away. One, I figured I would do something stupid and burn myself, and two, it was already too hot and humid outside. Didn't need the kitchen to feel the same way.

So I thought I maybe could try making a risotto in the rice cooker. I Googled it, and found that Wolfgang Puck said it was ok. And so it was. It was as good as my non-rice-cooker risotto, which is occasionally very good but most often only decent. In any case, it certainly helped keep the kitchen cool and allowed me to avoid the scary two-pan scenario.

You can certainly make risotto the old-fashioned way and stir the pesto in afterward. Up to you.

For the risotto:
2 cups (the ones that come with your rice cooker) Arborio rice, rinsed and drained
1/2 teaspoon salt
1 cup chicken or veg broth
Freshly ground pepper
Freshly grated Parmesan

To make the pesto: Remove stems and strings from peas. Open several of them and reserve the peas for garnish. Put the rest in a food processor with the pistachios and mint. Add enough olive oil to allow you to puree the peas, nuts, and mint into a chunky paste. Season with kosher salt and refrigerate in a tightly covered container until ready to use.

To make the risotto: Put the rice in the rice cooker and fill the bowl with water to between the 1 and 2 marks and add the salt. Cook rice for 20 minutes, then turn to the "keep warm" setting.

Open the rice cooker and pour in the chicken broth, stirring vigorously. The rice should be creamy. Season with pepper, adding more salt if necessary.

Stir several tablespoons of the pesto into the risotto. Scrape into a serving bowl and top with the reserved peas and some Parmesan. Garnish with mint, if desired.

**You'll have tons of pesto left over to smear on fish or chicken or whathaveyou. It's great with ricotta on thickly sliced, lightly-toasted, country-style bread, too.