It had been a year since I'd sniffed and eaten my way around New York, and high time I did it again. So I made arrangements to go up one Friday morning to check out as many restaurants and perfume counters I could squeeze into a quick 30 hours.

I planned to begin my scented tour in upper midtown, so I wanted to eat lunch in that neighborhood. Quality Meats is on 58th Street, just down the street from Bergdorf's. Despite being primarily a steakhouse, they had a number of interesting chopped salads on their luncheon menu. The salad varieties included classic, green goddess, roasted beet, Mediterranean, and Eastern (pan-Asian), all of which could be topped with one's choice from a list of proteins. I went with the roasted beet salad (baby beets, radicchio, frisee, arugula, and toasted walnut vinaigrette) with seared yellowfin tuna. 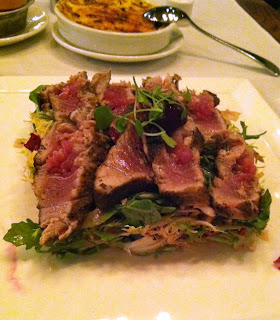 Arrestingly plated, the large portion of bitter greens and beets was topped with perfectly cooked tuna. While the salad itself could have used both more dressing and more seasoning (thankfully there was a tiny salt cellar on the table), I thought the tuna was nicely seasoned and appreciated the subtle hint of cumin. 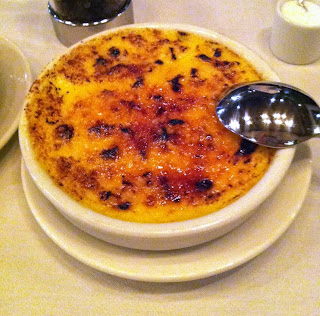 I also tried a side of the restaurant's signature corn creme brulee. I had originally also planned to order ice cream for dessert, but the brulee was sweet enough to stand in for that course. Extremely rich and creamy, the generously-portioned custard was more cream than egg, and the burnt sugar topping added a pleasant bitterness.

Much later that evening, I found myself wandering through the West Village. Not having made a dinner reservation left my choices wide open...or as wide open as they can be at 7pm on a bustling Friday night. I remembered enjoying Harold Dieterle's Kin Shop on my last trip to NY; at that time Mr Minx and I sampled several outstanding items. A quick check of my OpenTable app revealed that the next available reservation wasn't until 10:30pm. Undeterred, I walked up 6th Avenue anyway to try my luck. I scored a seat at the bar where I enjoyed a fragrant Siamese Smash (Heaven Hill bourbon, calamansi, yuzu, lemon bitters, & thai basil) while perusing the menu. 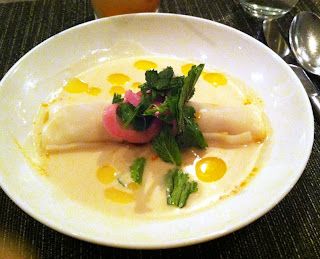 I ended up ordering two appetizers. The first was a steamed peekytoe crab & spicy pork crepe in a coconut broth with chili oil and fresh herbs. The light rice flour crepe was wrapped around a sausage-like cylinder of pork and crab and set atop a gorgeous broth redolent of coconut and fish sauce. A side order of sticky rice was employed to soak up all of the delicious juices. 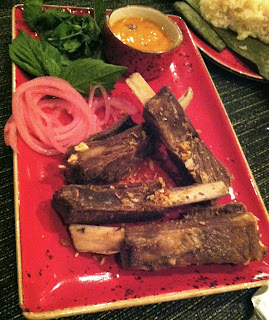 A special of crispy lamb ribs with a crab dipping sauce served as my entree. The four ribs were small but meaty, lightly crisp on the outside and tender on the inside. They were lightly seasoned, but when eaten with a bit of everything else on the plate--sauce, herbs, pickled onions--the flavor shone.

I find that eating alone at a bar can often be amusing. First I got a laugh from a guy showing off his brand new Apple watch...which refused to work in the restaurant. Money well spent. When he left, he was replaced by a Latino man with a very heavy accent. He seemed to think that Kin Shop was a garden variety Thai restaurant and that he could get pad Thai with chicken. If he couldn't get pad Thai with chicken, could he get something else with chicken? If he had examined the menu at all, rather than playing with his phone, he would have seen there was not a single chicken dish on the menu. Equally amusing was that the bartender, who doubled as our waiter, insisted that not only could he not get pad Thai with chicken, he could not get pad Thai. But pad Thai (with shrimp) was clearly available. (Perhaps not so clearly, as it was spelled "phat" Thai on the menu.) 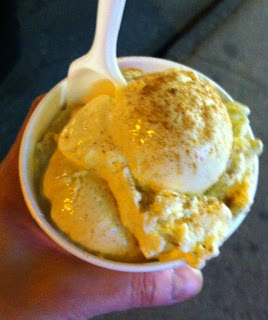 After dinner, I walked in search of gelato. There are actually many places to get gelato in the neighborhood, but all of them had a line out to there. I stepped into Cones, on Bleecker Street, and opted for Argentine-style ice cream--helado--instead. Similar to gelato in that it has a lower fat and calorie count than American ice cream, helado is still decadently creamy. I enjoyed two flavors, sweet potato studded with bits of brie cheese, and corn, both richly sweet.