A Few Meals in Charles County

A couple weeks back we spent some time in Charles County as we attended the Potomac Snakehead Tournament with our friends Fran and Bill. For research purposes - we weren't doing any actual fish-wrangling. We heard that there were few choices for decent food in the area, apart from the usual chain restaurants. Most of those were in Waldorf, but we stayed a few miles down the road in La Plata where choices were even fewer. We did *not* want to dine at the Applebee's, even ironically, so we did a little research and came up with a place called Captain Billy's Crab House in Popes Creek.

It was a Saturday night and when we rolled up to Captain Billy's, the parking lot was packed and there was a line out the door. We put our name in at the hostess booth, got a buzzer, and went to sit outside and wait. It had been a hot day, but the evening was breezy and our wait was not unpleasant in the least. We got in some good people-watching and selfie-taking, and found that Charles County is pretty inexpensive. The guys went in to bring us drinks. For $18, they got two Sam Adams drafts and two jumbo pina coladas that weren't top shelf but weren't bad, either. In any case, it occupied us for part of our 40 minute wait.

Eventually, we were shown to a table and ordered some grub. Mr Minx and I were starving, having eating little more than some Trader Joe's muhammara and Triscuits in the 12 hours since our 8am breakfast. I declared as much to our waitress, who did an admirable job of taking care of us despite the hordes of people around us.

A while after we ordered,, our dining companions' side salads arrived. We were not prescient enough to know that the kitchen was backed up and hot food was coming out slowly, so we could only watch them eat. Our waitress, knowing we were hungry, brought us a conciliatory dish of hush puppies. They looked more like tiny potatoes than hush puppies, but they tasted great and we fell on them with gusto. 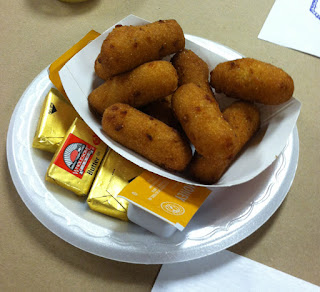 Some minutes later, she brought more apologies and a plate of steamed shrimp. Those were also quickly dispatched. 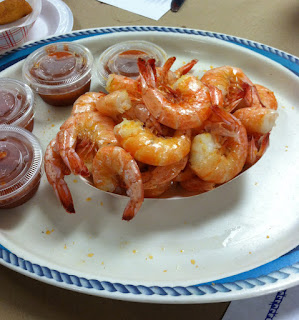 Finally, we received our entrees.

I ordered the fried oyster dinner with sides of excellent fresh cole slaw and rather characterless boiled green beans. The oysters were nicely cooked, and the batter had a good crunch--there was just too much of it, and I noticed pockets of raw batter here and there. 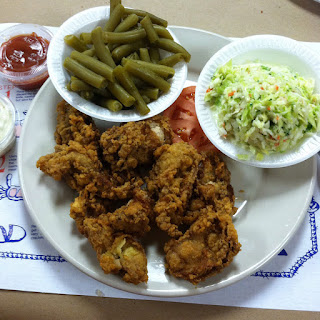 Mr Minx got the broiled seafood platter, which came with a plump crab cake, shrimp, scallops, and a fish fillet. It was the most expensive thing we ordered, at $30, but we figured that seafood on the Western shore, in a restaurant right on the Potomac, couldn't be bad.

The shrimp and scallops were fine. Bill had scallops too, and he enjoyed them, but the crab cake was all shades of wrong. For one thing, it had bits of bell pepper in it. One expects incorrectly-made crab cakes in Pittsburgh, but not in Maryland. I'm sorry, but one simply does not put bell pepper in crab cakes. Crab imperial, ok. Not crab cakes. Not only that, the cakes were so full of breading as to be mushy, and I guarantee the crab was sourced somewhere in Asia. The fish was tilapia, which I wouldn't feed my dog. I don't know how humans eat it. Yeah, so it's marketed as a mild-tasting white fish, but farm-raised tilapia (which is pretty much all of it) tastes like its own waste products. That's not a mild flavor, sorry. 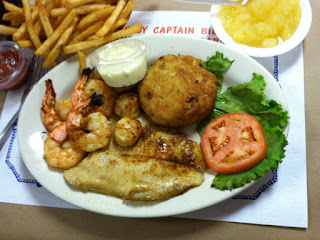 The fries were from a bag in the freezer, but they were palatable, and the apple sauce was good. Fran ordered crabcake sliders. Hers didn't have bell peppers, and she ate them, but I can't imagine they tasted any better than the crab cake Mr Minx had.

Still, our waitress' kindness went a long way, and despite issues, I'm going to say our meal at Captain Billy's was successful: we didn't go back to our hotel hungry. The next morning, we had breakfast at Pancakes Plus, in beautiful downtown La Plata. I had read somewhere on teh Innernets that this place served the "best breakfast in Charles County," and while I've never had breakfast elsewhere in that area, I must concur.

The place is tiny - 8 tables and a dozen+ stools at an L-shaped counter - and it was packed. There were stools available at different places at the counter, so we physically moved them to one end so we could sit together. I indulged in a North-meets-South breakfast of scrapple, grits, and over-medium eggs with toast for less than $6. Everything was great, the coffee was impressively tasty, and the pancakes that both Fran and Mr Minx ordered were enormous. Side orders of bacon were generous. And we didn't need to eat again until late that evening.

Were I to find myself in Charles County again, I'd definitely go back for breakfast at Pancakes Plus. I'd skip Captain Billy's though, and see what there was to eat in Waldorf, instead. But I hear from a good source that there are some pretty good BBQ places dotting the county, so that might be a better option.