Ok, folks - think of fashion. Think of runways, starlets in the front row, Heidi Klum and Michael Kors. Now what does any of that have to do with food? Granted, Michael Kors might make one think of oranges, carrots, and sweet potatoes, but fashion and food are really only related by the fug of superficiality that is often present in the air kisses of fashion ateliers and celebrity chefs. Which makes it perfect for the Food Network.

This week we're pretending it's Fashion Week on Food Network Star. Ok, maybe it was Fashion Week when this episode was filmed (either September 2011 or February 2012). In any case, fashion expert Ted Allen is the special super duper Food Network guest of the week. Wait - Ted Allen? Are they confusing him with Carson Kressley? Did they assign this fashion episode to him because he's gay? Certainly he's closer to a fashion icon than Anne Burrell, but shouldn't he have been on last week's Chopped-style challenge? 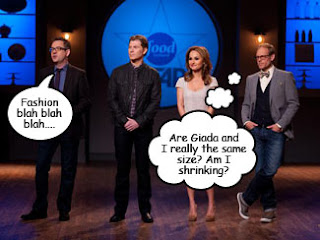 Anyway, the very fashionable Ted Allen informs the Wannabes that they will be taking a classically boring and/or ugly dish and making it into something much more hip and stylish. Giving it a makeover, as he puts it. Each Wannabe has a cloche-covered plate (Alton calls it a"large metal dome" so as not to scare or confuse regular Food Network viewers) containing the dish that he or she will be making fashionable. Ted has them unveil their plates one at a time.

Not only do the Wannabes have to transform a dish, they also have to do the usual one minute presentation, this time at a fake fashion show for real designer Pamella Roland. The winner of this challenge will receive a gift card from Discover worth a cool $10,000. Eric tells us that he *needs* that money because, as he reminds us for the 40th time, he quit his job to be on this show.

We see a bit of shopping, then some scenes of potential disaster in the kitchen. Overachiever Eric couldn't find spring roll wrappers in the supermarket, so he bought Vietnamese rice paper instead. Not the same thing at all. (Honestly, I don't know why Mr Hand-Crafted didn't make them from scratch and then brag about it.)  Not surprisingly, when he tried to deep-fry his little package (snicker), the wrapper exploded off the fish, probably because it was damp. He ends up making a quick beer batter into which he dips the rice paper-wrapped fish before frying. The experiment is successful, and he feels all proud of himself for saving his own ass at the last minute. 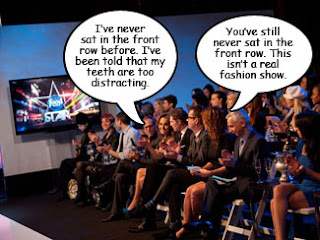 Team Bobby presents their dishes first to a mostly-live audience at the pretend fashion show. Each Wannabe gabs about his or her dish for an irritating sixty seconds while a model sashays it out to a dias. 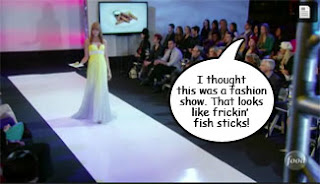 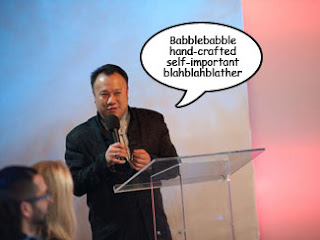 Eric goes first. His mind races, and he becomes a babble-monster, much as Martie has in past episodes. Fail. 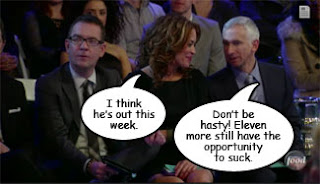 His fish, however, is really crispy and delicious. Michele doesn't do too well, either. She talks about Maine and segues into Rhode Island. We get that she's not all that big on geography, but lucky for her, the judges love her fish. Nikki cleverly brought fashion into her presentation, but, personally, I think she's a big fat phoney (which means she'll probably win the competition). The judges rave over her pork chop, which she (disappointingly) does not serve with apple sauce. Then Giada wonders out loud if a pork chop is "runway food," because it's not all tiny and sleek (as she no doubt believes herself to be). Bobby says it doesn't matter, and the two of them go back and forth with "yes it does," "no it doesn't" like the mature adults they are. 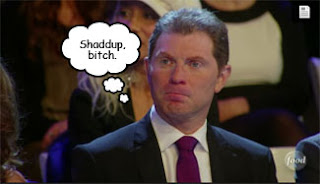 Malcolm poses on his way out, and Susie gushes that he's "attractive in every way." (Watch out, Mr Fogelson!) His food worked pretty well, too. Obviously Bobby picked a team of folks who could really cook.

Team Alton is on next. Justin has deconstructed his Beef Stroganoff to include cubes of rare beef and gelatinized gravy arranged in a checkerboard pattern. Susie forgets her passion for Malcolm and swoons and bats her eyelashes at Pink Lipstick Boy. The whole panel raves over the dish, which is actually pretty ugly, but it in no way resembles the original, which I suppose was the whole point of the challenge.

Emily is cute as a button with her stack of ham and pineapple; she's even fashioned a fascinator for herself from the same elements, which she wears with pride. 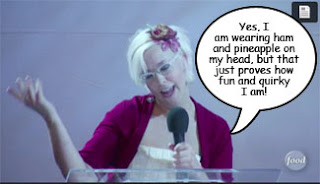 Alton is so thrilled he blows a kiss her way. Martie, always a potential disaster, leaves the ring mold on her tuna casserole for fear that if she removes it, her dish will collapse and make a mess. Much like her presentation. Actually, it was ok this time, maybe a little wooden, but the judges love the flavors in her dish. Judson, who needs a one-way ticket out of New York, now, does some bizarre shit, saying that his mantra is "food + fashion =  love." WTF? Alton can't believe his ears, and takes him to task on it later in the post-show green room.

Finally, Team Toothy goes to bat. Yvan comes out all loud, showy, and fake, but his pretty shepherd's pie impresses the judges with its lightness. Ippy seems canned to the judges, and Tushface doesn't think he's a star. And when Tushface doesn't think you're a star, your days are sadly numbered. Linkie stumbles over her words and produces a puff pastry-crusted pie that doesn't have enough chicken in it for the judges' tastes. Finally, Martita hits it out of the ballpark. She's calm, collected, and her Latin twist on chicken and rice is gorgeous and flavorful.

After a wardrobe change, including a dramatic silk floral muumuu for Susie Fogelson, the big 10K prize is awarded to Justin, for being so gosh-darn clever. Alton is thrilled, especially when his team is given the overall win. That means we're stuck with cry-baby Judson for another week. The good news is that one loser each from Giada's and Bobby's team are on the chopping block. Not surprisingly, it's Eric and Ippy. These two are twin brothers of different mothers because they both can cook really well but are rather weak on camera. So the Producer's Challenge this week is all camera work, no cooking. Eric and Ippy have to taste an identical dish and describe it in one minute. And that dish is...French Toast with strawberries

Eric goes first, listing the dish's ingredients but not describing flavors. He does manage to make it slightly personal by throwing out this entirely made-up story about how his mommy made him his first French Toast on Valentine's Day when he was six. Completely unbelievable and fake. 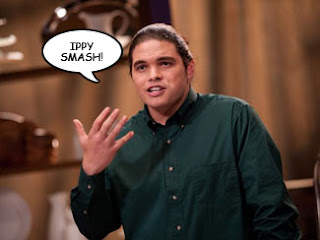 Somebody should tell Ippy that green is not his color.

Ippy's presentation is typically laid-back (and now I have to wonder if he's just carefully controlling the Hulk inside), but with a twist: he takes a ginormous bite of the toast and spends the remaining 52 seconds talking with his mouth full. He'll make Guy Fieri proud one day.

Bob and Susie then don ceremonial robes befitting their role as Priestesses of the Glowing Vagina and enter the temple along with the damned and their mentors. They talk about how Eric and Ippy are great cooks, yadda yadda, but one has to go home. Bobby and Giada try to defend their guys... 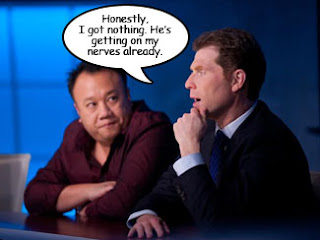 but it's curtains for Eric. Yay. 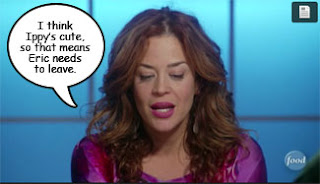 Next week: Guy Fieri and versatility. Somehow those things don't seem to go together.