This week, nothing happened. That's all folks! See you next week!

I can't get away with that, can I? But honestly, nothing really happened this week. I'm really starting to hate this format because it really gives me little to work with. I even had a shot of tequila before the show started in hopes that it might make me hallucinate something interesting, but I even slept like a baby last night without the usual FNS nightmares.

So...let's give it a try anyway. The Wannabes are told that since their future job as Food Network Stars will be to elevate everyday food, they'll be taking on the shopping mall food court. (You know, the way Paula Deen deep fries everything before slathering it in mayonnaise. That's "elevating" the food.). Right away, Linkie is in a panic because she says she's not familiar with food court food. I know she's from South Africa by way of the Southern US (or vice versa), but I can't believe that she's never had a Cinnabon or an Auntie Anne's pretzel. Is she one of those weird gals who don't like to shop? Anyhoo, the food court in question is the South Street Seaport, the very mention of which makes Bobby Flay blanch as he remembers the failure of "America's Next Great Restaurant."

Rather than allowing the Wannabes to take over existing food court restaurants like Chick Fil-A, Subway, or one of those places that does the Japanese-style chicken and bean sprout stir fries (yum), the teams are given themes to work with. Team Bobby is assigned "American Deli," Giada gets Mexican, and Alton gets Italy. Once again it seems like Giada is getting a gift from the network, as her beloved Martita is from Mexico. But then there's Linkie, who not only doesn't know food court food, she's got no f*ing clue about Mexican food, particularly the desserts. And she's the dessert girl, dontcha know? Linkie grills Martita about what to do, and gets the suggestion of churros and hot chocolate. Martita gives her few directions, so Linkie is left to her own devices, which aren't functioning particularly well.

Over on Bobby's side, his team decides to discard the "deli" thing completely and concentrate on American seafood. Michele is doing clam chowder, Nikki is taking fish tacos, and Malcolm is doing Maryland crab cakes. [Insert your own clam and fish taco jokes here.] Team Alton seems to be taking the Italian theme in stride, naming their group "Littler Italy," and choosing to make fritto misto (Justin), arancini (Martie), and a dessert panini (Emily).

After shopping, the Wannabes have 2 hours to cook. Martie seems to have bitten off more than she can chew, what with making a dish that has multiple components that need to be cooked in advance, combined, and then divided into 150 portions. Michele had to buy fresh clams, which she needs to take the time to precook and shuck. And while they're all running around, trying to get things done, the Producers come in and announce that they're going to throw a little curve ball.

They introduce Iron Chef Geoffrey Zakarian, who starts talking about Iron Chef, which of course has nothing to do with food courts. He then donates a bowl of old chicken livers left over from a recent Iron Chef battle. 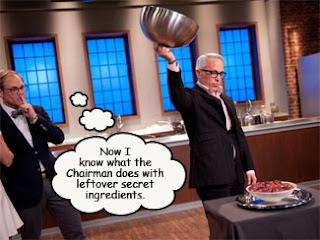 One person from every team has to incorporate these livers into his or her dish, which makes both Emily and Linkie (who are prepping dessert) sigh in relief.. Michele, Justin, and Yvan volunteer to be the victims this time around.

The next day, the Wannabes head to the Seaport to their makeshift "food court." Littler Italy has a lot of food to fry, what with Justin's Fritto Misto and Martie's arancini, and their oil just won't get hot. It's starting to smell like a deep-fried disaster, but somehow we know they'll pull it off...because others are getting the Loser Edit. Speaking of losers, over in Mexico, Linkie has her oil plenty hot, but she really f*ed up the churro batter. Actually, she made a dough and not a batter, and her "churros" are cooking up all hard and crunchy rather than being anything like a donut. 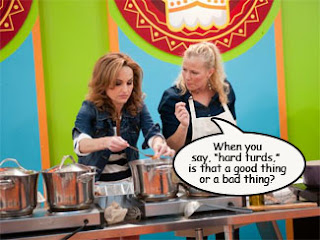 Eventually their prep time is up and the hungry hordes flock in to nom. Team Alton gets their oil up to temp and starts frying everything in sight. Justin serves up his Italian-style tempura with a shot of lemon juice out of a atomizer bottle. That boy is certainly clever. Martie tells everyone that arancini are a perfect party food, and the guests are literally eating everything up.

The judges come in for a taste and hit Team Bobby's "American Sandbar" first. They think Nikki's tacos are tame - she did use tilapia, after all - but they love both Malcolm's crab cake and Michele's clam chowder, especially with the chicken liver-topped crouton she's added to the top. Michele is clearly the cheerleader of the group and made the biggest impact, while Malcolm and Nikki were both more in the background and not particularly dynamic. 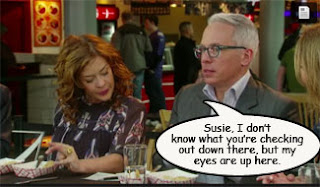 Team Giada gets the next visit, and Ippy and Yvan both do very well with their presentations. They're upbeat and have good stories. Ippy even has appropriate food-related tattoos to go with his pineapple and pork dish. Martita, who should have had this in the bag, is really rather lackluster. And Linkie - oh Linkie. We know at this point she's going home. After all, she's on Team Giada, which is the only one that still has four members. Linkie has a hard time explaining why her churros are so bad, and that leaves both Susie and Tushface to grimace and make sad faces at her. 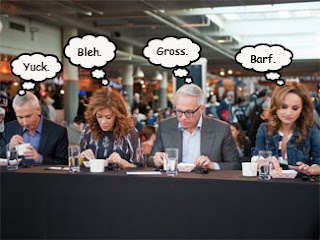 Team Alton does a complete 180 over last week's performance. All three of them wowed the judges with both their food and their presentations. Martie even shut up after a few sentences. Obviously they are the winning team, which means one person from Bobby's and Giada's teams face elimination. But we don't find that out until the next day.... 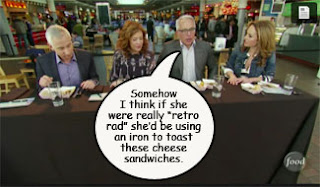 ...which in the miracle of TV, is after the commercial break. Nikki and Linkie are on the chopping block and they need to take a boring ingredient - chicken - and make something extraordinary out of it (like deep-frying it and slathering it in mayonnaise). And of course do a 60-second on-camera presentation.

Nikki has changed her POV from "Girl on Grill" to the "Grill Next Door" which probably disappoints Bobby Flay a bit as he seemed to like her racy personality. She makes grilled chicken with a tzatziki sauce and a grilled lemon. Seems like it would be tasty, but she comes off as harsh and unpleasant. Honestly, I would not watch this woman on tv. She's not likable. Linkie, on the other hand, is likable, but doesn't belong on food television. She makes chicken breasts boozed-up with spiced rum, but she stumbles over her words during her presentation. She's really a big fail. 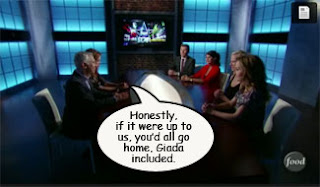 In the Room of the Glowing Vagina, Susie and Tush feel pretty much the same way. They think Nikki is abrasive, despite Bobby's effusive praise (possibly because he wants to get into her pants), and they think Linkie is just too unpolished. And Linkie is shown the door. 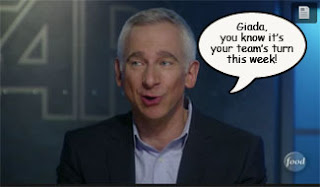 Next week: Meet the Press. Yawn.