This week's show starts with the Wannabes heading back to their apartment after a long evening of...? Broadway shows? wandering aimlessly through Times Square after a late dinner at Bubba Gump's? picking up hookers? They find their mentors waiting for them...ut oh. This can't be good. And it's not, really. Alton, Giada, and Bobby dress down their team in turn. Some Wannabes need pep talks, others need a kick in the pants. 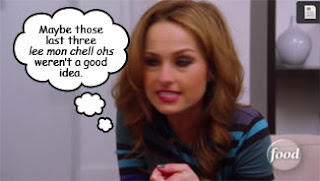 Apparently Giada and Alton were out carousing, too, since Giada's undereye bags are big enough to use as steamer trunks, and Alton's got a good growth of stubble going. He also seems maybe a bit...drunk. 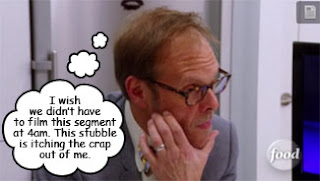 The next morning, everyone is cleaned up and (mostly) sober when they arrive at the Food Network studios. The mentors introduce the Special Guest Annoyance this week - Guy Fieri - who will be assisting the Wannabes on this week's Journey to Versatility: the Ability to Thrive in Any Situation (as Long as it Involves Talking With a Mouth Full of Food).

The Star Challenge this week: each team must host a live "special" with a live audience. "Live" as in no do-overs, no retakes, and a great potential for catastrophe. Each of these specials has a theme, no doubt chosen specifically for each group. Team Alton gets Halloween. Team Giada gets A Salute to Toothpaste. And Team Bobby gets Cooking for Kids.

The teams head to their respective green rooms to go over ideas. Nikki on Team Bobby immediately wants to do something "mindful" with their cooking for kids segment. Healthy cooking. Which of course kids don't like. It's hard to get kids to eat anything at all except chicken fingers and pizza, so they're cooking up chicken fingers and pizza. Giada's team is completely stymied about what they can do with toothpaste as a food, so they just sit blankly and stare at their bobbleheaded leader, who grins maniacally back at them. Finally, on Team Alton, Justin has flipped his lid. He's going to make sardines (ick) and then remove their skeletons to deep fry (double ick). Then I remember that he's not on the "cooking for kids" team and suddenly he seems brilliant again.

The next day, the Wannabes congregate in the kitchen where they have one hour to prep their dishes. They've been to the grocery store already, but Nikki has forgotten to buy flour for her pizza crusts. She thought the pantry would have flour, but she thought wrong. 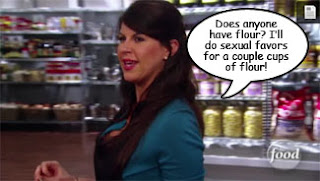 Lucky for her, Linkie didn't make the same assumption and has flour to borrow. Once that problem is solved, Nikki has blender issues. It looks like she's chosen one with a broken jar, so all of the ingredients for her smoothie (many of which are green) run out the bottom. Children everywhere cheer at the sight. Is this a loser edit? Maybe not.

On to the very special (aka short bus) "specials."

Team Alton goes first. Justin and his fried skeletons are petrified. He sees Guy Fieri's bleached hair and greasy backwards sunglasses up close and freaks out. I can't say that I blame him. Eventually he realizes that duh, he's on, and starts the presentation. Judson goes next, and he's got a brand new POV. Former fatty gets slim(ish). Good concept, but the man just isn't interesting enough to be on TV. 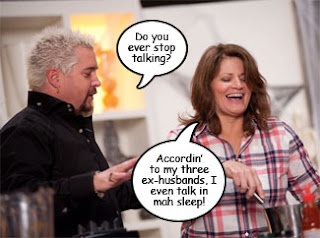 Martie rambles, as expected, and takes some of Emily's time. But Emily, perky trouper that she is, gets her presentation completed in the remaining 1:45, even managing to shove a spoonful of applesauce in Guy's mouth. (She should have done that to Martie, to get her to shut up.)

The judges taste the food and think that everything is pretty good, but that there wasn't a lot of "team" in the team presentation, nor a lot of personality.

Team Giada is next, and they all come out dressed as teeth. They beat on each other with giant prop toothbrushes and Giada cheers them on like her life depends on it. When they are done with their presentation, she jumps up and down and screams like a loon. 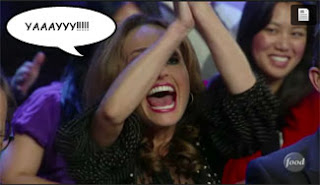 At this point in the show, I realize what is wrong with this season. There's no superbitch like last season's Middle Eastern Penny. There's no complete morons, no talentless losers. (They've been eliminated already.) Everyone is sunshine and rainbows and puppies and shit, and all of the teammates really seem to love each other. It's the damn team thing that's wrong with this season. It just sucks the life out of the show. I'm having such a hard time writing about it, I'm resorting to making things up wholesale just to entertain myself.

Finally, team Bobby goes to bat. Nikki again has blender issues, so Guy pushes her aside and talks to Michele, who has made her mama's meatballs. Has she become Rocco DiSpirito? Michele asks Guy if he's her brother, which gets a laugh out of the audience but seems to disturb Guy a bit. I guess he also gets that a lot from Anne Burrell. On to Malcolm, who talks about chicken fingers and kids playing with their food, but doesn't mention that he has kids, too, which could have been a really good selling point for him in this "cooking for kids" presentation. And then they bring out some actual rugrats who make all sorts of faces at Nikki's smoothie, which has kale in it. 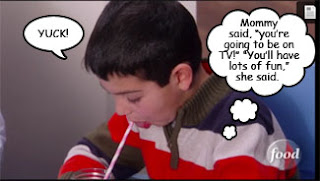 Even I won't drink a smoothie with kale in it, and I (almost) like kale. Lucky for Nikki, Tushface loves it, and the judges are pretty happy with the performance overall.

The next day, Susie tells the gang that there were two winning teams, Bobby's and Giada's, and that the members of Alton's team will have to compete against each other in the Producer's Challenge. This week, because it's Versatility Week, the Wannabes have to throw actual darts at an actual map to choose a state, then cook a dish and make a presentation relating to that state, while retaining their POV.

Judson's dart lands on Arkansas, Justin's on Nebraska, Emily's on Arizona, and Martie's on Pennsylvania. They head to the kitchen to cook, with Alton whispering hints in their ears. He tells Judson that Ark. is famous for catfish, so Judson makes catfish with a broiled panko and pecan crust. Justin is doing his own crazy thing and making a calorie-laden dish of corn, steak, and pasta that should please any hard working cattleman or cornholerhusker. Emily is making chicken posole in a pressure cooker, and Martie is running around with no plans on the horizon. Eventually Alton suggests to her that most supermarket mushrooms are grown in PA, and Martie remembers that Philadelphia cream cheese must also be from PA!

Cooking is up and it's time to face the music. And the cameras. Then Team Alton enters the Holy Sepulchre of the Vagina of Doom for the verdict. 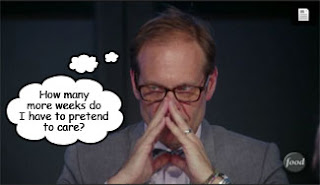 At this point, I'm ready for bed. I'm pretty sure that Justin and Emily are safe and the other two have their necks on the line. And whaddya know? I'm right. The videos are all pretty painful to watch, but Tushface and Susie tell Em and Justin that they're safe. Did anyone else notice that Susie seemed a little grumpy this week? She didn't fawn over Justin or any of the other male Wannabes, and Ippy looked to be wearing a particularly flattering shade of blush this week.

When Emily and Justin leave the room, Alton decides he has something to say. It's clear that he thinks Martie is going to be leaving this week, so he does his best to defend Judson. He gives the room a sob story about knowing how it feels to be fat and how fat people struggle with their unattractiveness and...

Don't dump your former fatty psychoses on the rest of us, Mr Brown. For some reason, you decided to lose a bunch of weight and transform yourself from a fun nerd to a cranky English teacher. You were actually rather cute when you weighed more, believe it or not. You also seemed pretty sincere, whereas now, the more I watch you on this show, the more you seem like you're acting. Who's the real Alton Brown? The bowling shirt-clad Culinary Nerd? The hyperbolic, over-the-top Circus Barker Host of Iron Chef America? or the Cranky Professor? 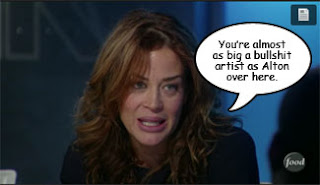 Anyway...it's time for Judson to leave. He's not a star, and his name is far too similar to that of a teammate. I'm pretty sure Susie even called him "Justin" at the end.