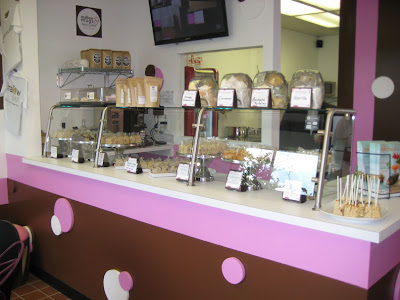 I'd tried Mallow Munchies at the UMB Farmers' Market a couple of summers ago and was delighted at the moist texture. When I was a kid, I loved when Mom made Rice Krispies Treats, but preferred to eat them while they were still somewhat warm and gooey, pretty much straight out of the pot. Once they hit the fridge and firmed up, they were a bit too crunchy and hard. Nikki Lewis' Mallow Munchies are made with her own home-made marshmallows (aka Mallow Softies), and I think they are the key to the improved texture of her treats. They taste pretty darn great, too. 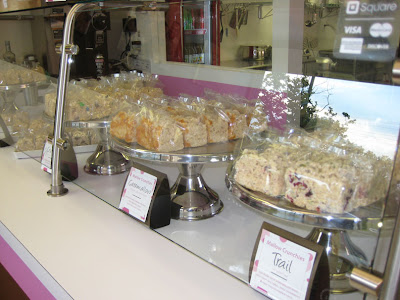 Nikki recently opened the Mallow Bar, near Golden Ring, as the first crispy treat cafe probably in the world. She sells her confections there, as well as a handful of other locally-produced edibles (Zeke's Coffee, Teaz, Mouth Party caramels, Dirty Carrots cupcakes and muffins). We tried a couple of varieties of Mallow Munchies on a recent visit to the cafe, including CaraMallow, Crunch, and Toffee Nut. I think the caramel-topped CaraMallow is my favorite, but the Crunch, which contains popcorn and M&Ms, is also pretty tasty (and would make a fabulous movie theater treat!). She sells the marshmallows alone, too, and they also come in a variety of flavors like pistachio and banana pudding.

Enjoy your Mallow-y goodies to go, or hang out in the cute brown and pink decorated cafe, which is WiFi-equipped and a perfect place to linger with a cup of Zeke's coffee.