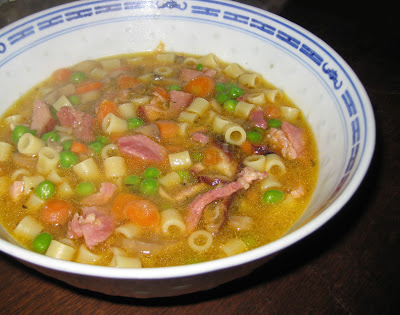 The other day, I was visiting my mother and she begged me to take the leftover ham she had in her refrigerator. Apparently, my brother had cooked up a huge spiral-cut ham and they, despite their best efforts, could not manage to finish the whole thing. Although the Minx and I are not big ham people, I took pity on my mom and loaded up a large container with ham. I even wrapped up the bone and took that home.
That night, Minx and I ate some slices with a makeshift stove-top potatoes au gratin that I whipped together and fresh green beans. The ham was actually not too bad. It seemed to be slightly overcooked, so much of the moisture was squeezed out of it and there was very little fat. We ate healthy portions, but we had barely scratched the surface of the ham pile in the container.
For the following night's dinner, I decided that I had to do something with that giant ham bone (and I don't mean William Shatner). Minx had given me three soup cookbooks for Christmas in hopes that I would make more soup dishes this year, so I combed through the books for recipes using ham. Surprisingly, there were only a few, so I settled on modifying a Yankee Bean with Ham recipe from The Daily Soup Cookbook, even though I had no beans and the Minx would not eat them anyway. I decided to replace the beans with ditalini pasta (little, stubby tube shapes).
First, I made the stock by sauteing about 1/2 cup of chopped carrots, one cup of chopped mushrooms, and 1 medium onion (also chopped) in some vegetable oil until the mixture was soft. Then I added the ham bone and six cups of water. After bringing the liquid to a boil, I turned down the heat to a simmer and added two bay leaves and one teaspoon of thyme. I also added salt and pepper to taste along with a clove of crushed garlic. I let the liquid simmer for two hours.
After two hours, the bone had given up its goodness, so I removed it from the liquid. At this point, there was quite a bit of melted fat floating on the surface of the water, so I skimmed out as much as I could before I added the remaining ingredients. Those ingredients were:
1 cup of ham cut into narrow strips
1/2 cup of frozen peas
1/2 cup of ditalini pasta
I turned up the heat to bring the whole mixture to a boil and let it cook like that for about 8 minutes. That allowed the pasta to cook to an al dente state. Then I turned the heat off so the soup could cool down enough to eat. While it was cooling, I removed the two bay leaves and added other seasonings to taste. You can season it however you want, but I added a pinch of cayenne pepper, a little garlic powder, and some smoked paprika.
The fat from the ham bone added just the right amount of unctuousness, the ham slices added salt and smokiness, and the peas reminded one of split-pea soup without the weird, indescribable funk that split-pea soup tends to have. Overall, it was a warm, comforting dinner for a cold winter's day.
As a side note, the rest of the ham was used for ham sandwiches, breakfast strata, pot pie, and cabbage soup. That was one big ass ham!
Posted by Neal P