Nobody could ever accuse me of being a seasonal cook. While I think it's a fine idea, and I use as much fresh local produce as I can afford in the summertime (afford being the key word here - farmers' market prices are often a wee bit too high for my pocketbook), I still need to eat vegetables in the winter. And when the weather turns cold, somehow I am able to find fresh yellow corn in the supermarket. I have no idea where it comes from, but it's sweet and actually tastes like corn (unlike the white stuff the region seems to favor). Four ears of yellow corn were calling to me from the fridge and begging to be made into the summertime dish of succotash.

I'm no fan of lima beans, so frozen edamame were called to duty as a stand-in. I also had a bunch of non-local asparagus on hand, a lone roasted red pepper in a jar, and half a package of bacon.

Once I had decided on succotash, I had to then determine the meal's protein and starch components, because that's how we roll in the Minx household. Three medium-sized parsnips were languishing in the crisper and I decided to use them in my first ever placki - latkes to the rest of the world. My grandma used to make potato placki all the time. All. The. Time. Honestly, I won't even eat them anymore. But parsnips are different - rooty, sweet, carroty.

With the somewhat complicated veg and starch decided, it seemed only right to make a rather plain protein. Frozen salmon fillets from Trader Joe's were popped under the broiler and topped with a much needed acid bite of sour cream mixed with lemon. 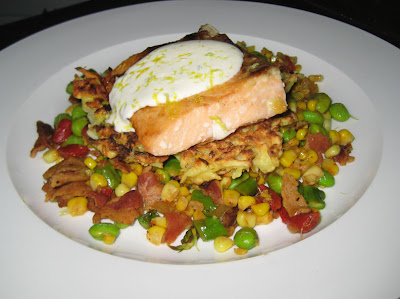 While everything was tasty enough, I felt the dishes had too much of a bland sameness about them. Mr Minx said the placki and succotash should have been served apart from one another - placki and plain asparagus and salmon, or salmon and succotash and mashed potatoes - because they both had a similar lumpy-bumpy texture. I had to agree.
Posted by theminx