A good while back, I tasted a Cambodian dish prepared by fellow food blogger John, of the very excellent Baltimore Snacker. It was called "Nataing" and contained ground pork, fish sauce, sugar, coconut milk, and tons of garlic - a simple but delicious combination. I was happy to find that the recipe was available in an online version of the Elephant Walk Cookbook and bookmarked it. It took a good year before I got around to adapting it for my personal use, although it was always somewhere on the back of my mind.

Because the Ravens/Steelers NFL Playoff debacle game was on during dinnertime, I whipped up some nachos to choke nosh on while we tore out our hair and screamed at the television watched the game. I had tucked about a pound and a half of pork shoulder left over from the Christmas taco party into the freezer and used a bit of it, along with some chorizo, for the nachos. That left me with more than a pound of defrosted pork shoulder to play with for Sunday's (much calmer) dinner. 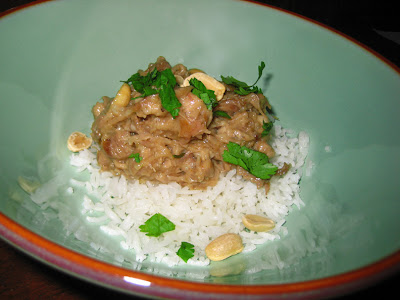 While the textures in my version are very different from that of the original, it shares the same rich and savory flavor profile and was delightful over leftover basmati rice.

Cook onion in oil until just softened. Stir in pork, garlic, peanut butter and mix until well-combined. Stir in coconut milk, sugar, and fish sauce. Bring to a boil then cover and simmer until much of the liquid has evaporated, about an hour. Taste for seasoning; add more fish sauce if necessary. Serve over rice, garnished with cilantro, scallions, and peanuts. Serves 4.
Posted by theminx