A few months ago, I became reconnected with an old college friend of mine. (Perhaps I shouldn't say "old" but hey, we are middle-aged.) At the Maryland Institute College of Art, we shared many a lunch together, dining upon the student center's eclectic offerings (broccoli knishes, super-oniony tabbouleh, "Earth" pitas, all often in the same meal) while complaining about the latest illustration assignment or gossiping about our classmates. Since graduation, as we went our separate ways, both of us formed an interest in cooking, so it seemed only natural that when she came to Baltimore for a visit that we would go out to dinner.

But first - a visit to that block in Hampden that has dubbed itself "Christmas Street." (Wonder if anyone is going to trademark those words?) My new favorite display this year was the robot nativity.

After an invigorating jaunt through the neighborhood, we headed to The Dogwood, which would be the last new-to-us dining experience of 2010. I've heard lots of good things about it, so my expectations were high. I can't say that I was disappointed, but the meal wasn't perfect by any stretch of the imagination.

The Dogwood is housed in the same space on 36th Street that once belonged to a restaurant called Mamie's, where my friend Kate and I regularly indulged in their mid-week lobster special. At that time, the dining room was divided up into smaller areas full of knick-knacks; eating there was not unlike supping in a cheap flea market and a bit too folksy for my tastes. The Dogwood has taken down the various partitions and French doors that once cluttered the area, installed a bar, and probably enlarged the kitchen as the space seems smaller overall. Instead of figurines and old furniture, there is "art" (photographs, murals, and childish paintings) that takes me out of the flea market and puts me instead in a kindergarten classroom.

The menu is similarly cluttered with categories such as "amuse the palate," "small plates," and "casual fare," which don't say a whole lot and are not necessarily indicative of portion sizes. For instance, the plate of Gruyere gougeres ordered by Mr Minx contained five of the choux pastries, each as large as a healthy dinner roll. These fell under the "amuse the palate" category (how is that title really any different in meaning than "appetizer?") but may have better been categorized as "for the table." In any case, they were fine, although I would have preferred them to be more cheesy. 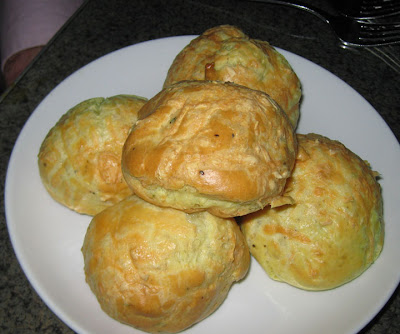 The gougeres were even better when opened and filled with some of my "small plate" starter of braised escargot in acorn squash with wild mushrooms, autumn squash-roasted garlic cream, and apple-pumpkin relish. I've been on an escargot kick recently and was excited to see it offered on yet another local menu. Apart from an aggressive amount of pepper on the top and waxy, barely-cooked squash which wasn't worth eating, the mushrooms and escargot (which have similar textures, btw - if you're a mushroom lover, don't be afraid to try snails) were quite nice. 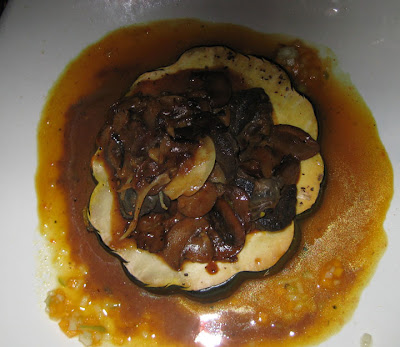 While Mr Minx and I ate escargot-filled gougeres, Leslie enjoyed a Farmer’s Market Salad with a basil-balsamic vinaigrette from the "salads" category.

By the time our entrees arrived, the restaurant was full and noisy and I turned the flash off on the camera, which explains the horrible quality of the next few photos. 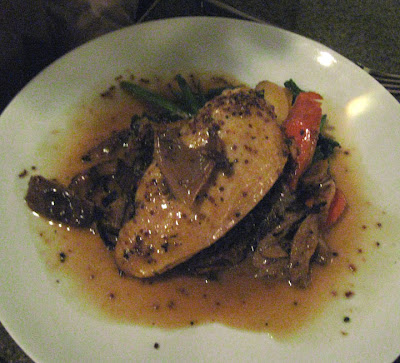 Mr Minx went for the thyme roasted organic airline breast of chicken served with potato rosti and wild mushrooms. It was well-cooked and moist, but a chicken breast is a chicken breast. The sauce and mushrooms were the most flavorful parts of this dish.

Leslie went for the Maine lobster-stuffed ravioli with leeks and ricotta, shiitake mushroom-fennel sauté, Laughing Bird shrimp, and Madeira cream. The stripes on the ravioli and the mushroom sauce made the dish visually interesting, but it did not photograph well at all. Fortunately, the elements worked harmoniously together, nicely accented with a touch of sweetness from the Madeira and bold shellfish flavors. 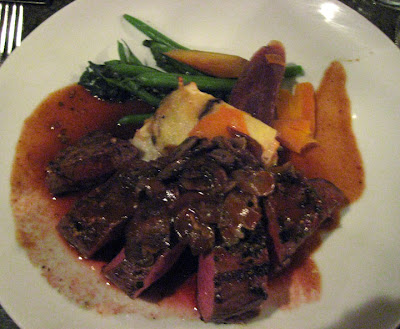 I had a hard time deciding whether I wanted two "small plates" or something from the "casual fare" category or even the Wednesday night "community special" (cioppino). Mr Minx had expressed interest in tasting the teres major, but when I pointed out the inclusion of sweet potatoes in its accompanying gratin, he demurred. So I decided to check it out. Again there was an aggressive amount of black pepper in my first bites, but the plate's overall flavors were nice. Apart from the steak. Teres major, also known as the "shoulder tender" is supposedly the second most-tender cut after the tenderloin. My portion, despite being perfectly cooked to the rare side of medium, needed some strenuous chewing and had as much flavor as its tenderloin cousin. That is to say, none. Don't they make steak that tastes like beef anymore?  Despite that, I loved the gratin, the mushrooms and the various root and green vegetables on the plate.

With ten types of cookies at home, plus home-made candies and pumpkin cheesecake, we eschewed dessert and coffee. Because the restaurant was so full, I think they were happy to see us leave - before we had our coats on, the hostess had started to re-set our table for the next diners. Despite this, the service was otherwise very good and attentive.

It's obvious that the restaurant has a way with vegetables, and is definitely mushroom-happy. I think next time we try the place, I'll opt to order something vegetarian to take advantage of The Dogwood's strengths.