Some years ago, my generous and thoughtful brother gifted us with a stovetop smoker and a bag of mesquite chips. The smoker sat, unused and unopened, on a shelf for a very long time because we were afraid of filling the house with smoke, setting off the alarm, and possibly burning down the house. The mesquite chips, however, were occasionally put to good use on the grill outside, which Mr Minx always arranges as far from the house as possible. (Yes, we are cautious people; you will not catch us deep-frying turkeys anytime soon.)

Then the February issue of Food & Wine arrived and I spotted a recipe for pork tenderloins that required a whopping 40 seconds in a stovetop smoker. After some consideration, I decided that having the smoker in action for such a short amount of time couldn't possibly burn the house down, and fetched it from its basement banishment. 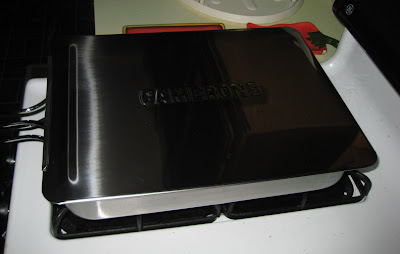 Reading the directions that came with the smoker went a long way in reassuring us that using it wasn't a dangerous procedure.

After putting in two tablespoons of the hickory "chips" (it was more like dust) that came with the smoker, it went over two burners on our stove. In went two pork tenderloins that had been given a quick rub with a random mixture of salt, brown sugar, cayenne, paprika, and onion and garlic powders. Once smoke started to rise, the smoker was closed securely and allowed to work its magic on the meat. Mr Minx and I both felt that 40 seconds was far too short a time to make a difference in the flavor of the pork, so we left it in for ten minutes. I know - bold. Allowing the smoker to cool down off the heat for a few minutes while I walked the dog made for a smoke-free reveal of two pork tenderloins that looked pretty much exactly the same as before their smoky bath.

I finished the tenderloins by browning them all over in an oven-proof skillet, then cooking them at 375F for about 25 minutes. In the meantime, I made a side dish of buttered quinoa and warmed up some of the black barbecue sauce I had prepared earlier in the day. 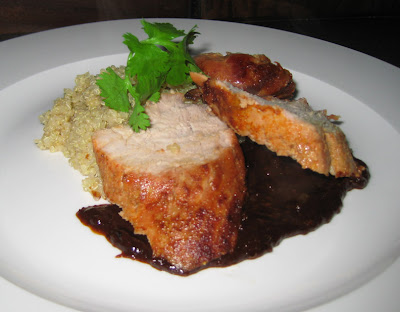 The smoke flavors were very subtle, a little hidden by the sauce. Now that I know it's a safe procedure, I'll try a longer time for my next smoking experiment. I'm thinking spare ribs for Super Bowl Sunday....
Posted by theminx

I have a stovetop smoker, although I don't use it often - prefer to smoke outdoors whenever possible. But since this winter has not been at all conducive to smoking outdoors, maybe it's time to get a chicken and smoke that baby.