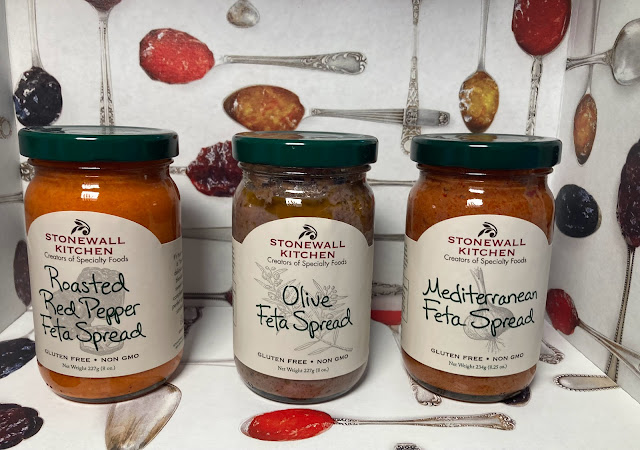 My brother is somewhat difficult to buy for, so when the holidays roll around, I resort to edible gifts. (Honestly, they are the best.) For the past few years, I've been ordering miscellaneous items from Stonewall Kitchens. I have been buying their products for decades, and have always been really happy with them. They have a large variety of goods, and the prices are decent. Best of all, everything I've tried tastes really great. So when I received an email from them touting their brand new products, I just had to request samples. And they delivered: all three varieties of their new feta spreads showed up on my front porch about a week later.
Sadly, I was on Whole30 at the time, so had to practice some serious patience before I could crack open a jar. I am a bit of a feta fanatic, putting its briny goodness on everything from pasta to oatmeal (yes, I said oatmeal), and I gotta admit that the idea of jarred spreads that combine the cheese and other Mediterranean ingredients turned me on.
Within a few days of saying buh-bye to the diet, I concocted a perfect way to use one of Stonewall Kitchens' feta spreads: as a flavoring agent for a big ol' head of roasted cauliflower. I roasted the veg first with a light coating of olive oil and a big pinch of salt. Once that baby was tender, I slathered it in the roasted red pepper feta spread and popped it under the broiler until it browned a bit. OMG - it was as delicious as I anticipated, and it really made a simple dish something special.
Plus, it added some much-needed color. Isn't it gorgeous? 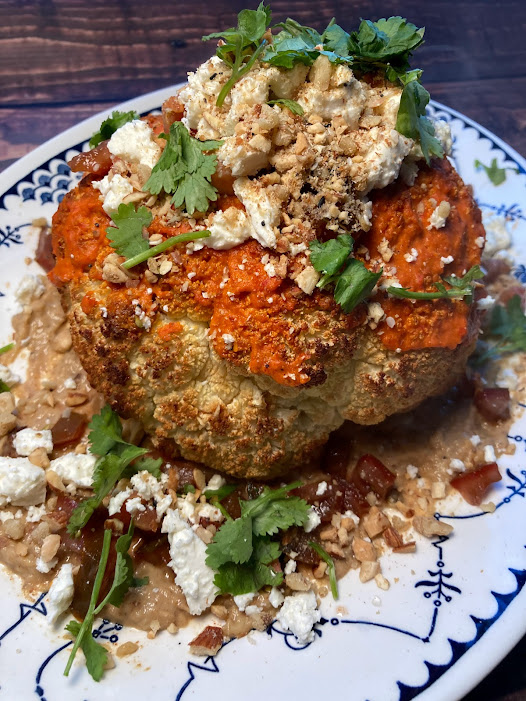 Of course you could use the spreads on crackers, as an accompaniment to an antipasto or charcuterie plate, or as a sandwich spread. This morning, I dolloped some in my oatmeal with a little additional feta and a sprinkle of hemp seeds. (If you haven't tried savory oatmeal before, you are missing out.) I'm betting they'd be a tasty addition to pasta, or potato salad, or pretty much anything that could use a little cheesy goodness. Definitely try it with roasted vegetables, as in the following recipe.
Mediterranean Cauliflower
There are several steps to this recipe, but they are all quite simple. The resulting dish is the Middle East on a platter, with elements from Morocco, Egypt, Greece, and Lebanon. None of the elements, mind you, are in the least bit authentic. I do a lot of substituting in my cooking. For instance, I was out of tahini, so used almond butter in the babaganoush instead. And I was too lazy to toast seeds and nuts for my dukkah and worried that I would probably burn the sesame seeds, so I used everything bagel seasoning. It already had the seeds, but also onion and garlic. Additionally, I used ground cumin and coriander, since they are already toasted, and pre-roasted nuts.
For the babaganoush-style eggplant spread:
1 medium eggplant
1 small clove garlic, crushed
Extra virgin olive oil
2 tablespoons almond butter
Kosher salt
Lemon juice
Smoked paprika
Ground cumin
For the tomatoes:
1 medium tomato
Kosher salt
Pinch ras el hanout or powdered harissa
For the dukkah-like topping:
1/4 cup toasted nuts of your choice (I used almonds and walnuts)
1 tablespoon everything bagel seasoning
1/2 teaspoon ground cumin
1/2 teaspoon ground coriander
For the cauliflower:
1 large cauliflower
Extra virgin olive oil
Kosher salt
Stonewall Kitchen Roasted Red Pepper Feta Spread
Feta cheese
Flat leaf parsley or cilantro
To make the eggplant:
Preheat the oven to 450F. Line a rimmed baking sheet with parchment.
Cut the eggplant in half lengthwise. Rub the cut sides with a little oil and place cut-side-down on the parchment. Roast for 45 minutes, until the skins collapse and the interior is very soft. Remove from the oven and allow to cool.
Once cool enough to handle, scrape the flesh out of the eggplant into a bowl. Using a fork, mash the eggplant into as close to a puree as possible, breaking up any fibers. Add the almond butter and garlic and stir well. Season to taste with the salt, lemon juice, paprika, and cumin. It should be creamy, bright, and slightly smoky. Scrape into a lidded container and refrigerate.
For the topping:
Crush the nuts and spices together in a mortar and pestle, or, if you don't have one large enough, just pop them in a sandwich-sized zip top bag and bash them into small pieces with something heavy (a meat tenderizer, a can of tomatoes, a brick, etc.). Set aside.
For the tomatoes:
Remove the core from the tomato and cut the flesh into small dice. If you're a neat-freak, remove the seeds. If you're me, leave them in. Scrape into a small bowl and season with salt and a pinch of seasoning. Set aside.
To make the cauliflower:
Turn the oven down to 350F.
Remove the outer green leaves from the cauliflower and trim an inch or two off the stem. Not so much that the florets start to fall off, but that there's a divot at the bottom of the cauli. Place the cauliflower, stem side down, on a rimmed baking sheet (I like to line my sheet with parchment). Rub the head with olive oil, and pat on a few generous pinches of salt. Roast the cauliflower for 60 - 75 minutes, until nicely browned on the outside and a knife can be inserted easily.
Preheat the broiler. Remove the parchment from the baking sheet, if using, and replace the cauliflower. (The parchment may burn under the broiler.) Pour a few tablespoons-ful of the Stonewall Kitchen Roasted Red Pepper Feta Spread on top of the cauliflower and rub it around to cover. Broil the cauliflower until the spread starts to brown, about 5 minutes. Remove from the heat.
To assemble the dish:
Spread about half of the eggplant spread onto a platter. Center the cauliflower on top. Sprinkle with the tomatoes, feta cheese, some of the nut topping, and parsley or cilantro. Serve with the remaining eggplant, red pepper feta spread, and topping.
Serves 2-3 as a main dish, 4-6 as a side.