I went to the office yesterday for the first time in 12+ weeks. It was strange. Only my supervisor was there, plus a guy from another department. The corridors were dark, the air was silent. And I kinda liked it. My regular readers probably have figured out that I don't like people very much, with few exceptions, so I found the deserted hallways soothing. Still, I'd rather not go back to work anytime soon. The occasional visit to do some essential chore that cannot be done from home is fine, but working from home is a life change that I have definitely gotten behind.

That is not true of the culinary world, of course. Thirteen weeks into the pandemic and restaurant people are tired of losing money. Honestly, I get it. But opening restaurants for indoor dining isn't going to help the bottom line very much. Restaurants need 80% capacity to survive, not 50%. Maryland is opening restaurants today at 5pm, after only a week of outdoor dining. Frankly, I'm sick to my stomach that businesses are valued more than people (and remember, I don't like people). We (that is, the state of Maryland) haven't yet finished our first wave of the virus but apparently are eager to get started on the second. Good luck to those people who are so desperate to get out and be aspirated on by others. My husband and I will continue to stay at home.

On to today's recap, which should be fairly short as there was no Quickfire Challenge.

When the episode begins, our remaining four cheftestants--Stephanie, Melissa, Kevin, and Bryan--are still facing Judges' Table. Prosecco Padma is still babbling on in half-Italian, half-English. She tells the chefs that super sponsor San Pellegrino is sending them to Parma in Emilia-Romagna where they will embark on a food tour of two of the region's most important foods: Parmesan cheese and Prosciutto. Their tour guide will be Lorenzo Cogo, the youngest chef to receive a Michelin star in Italy. 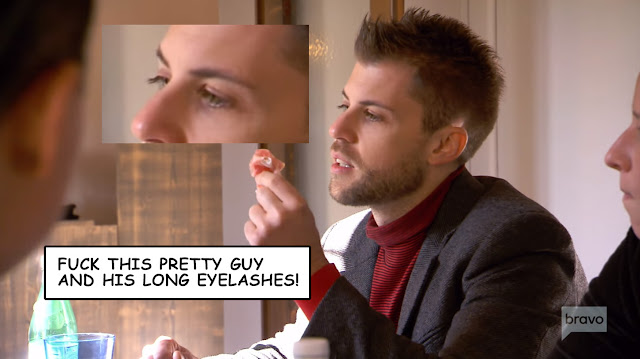 Padma also reveals the next Elimination Challenge, in which each of them will be responsible for two dishes, a primi and secondi--essentially a pasta course and a meat course--featuring the region's prized cheese and ham. These delights will be served up to a gaggle of Michelin-star-winning chefs who will judge the chefs harshly because they are stupid Americans who don't understand Italian food.

The next morning, they drive through the gorgeous countryside to their first destination, a cheese factory called Caseificio Gennari, where they don stylish blue coveralls and caps so they don't get their American filth on the product. 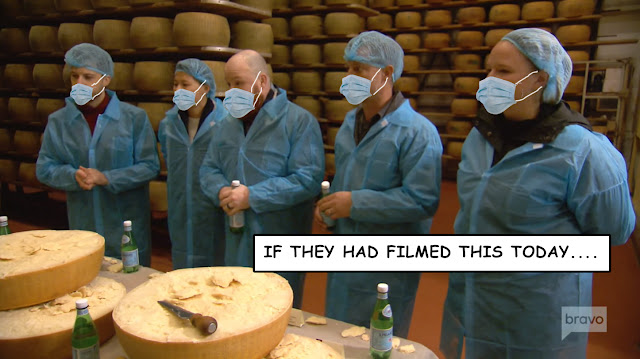 They are gifted with an 80-pound wheel of Parmesan to use in their dishes. Bryan hoists it on his shoulder and they are off to their next destination, Ruliano. There they taste some of the prized ham of the region, are told they should never cook the ham, and receive a leg of prosciutto to take with them. Bryan hoists it on the other shoulder and books a flight back to the states.

Shopping for this contest involves a series of adorable markets in Parma, where the produce is gorgeous despite it being November. Stephanie picks out a giant cabbage that looks like it just came out of the ground. Kevin finds some beautiful red and white borlotti beans in their pods. Bryan purchases a fish with bright red gills--a sure sign of freshness. Melissa sees scallops and thinks of XO sauce, which is made with dried scallops and Jinua ham. She feels prosciutto might be a good way to link her Chinese heritage with Italian food.

After shopping, the chefs head to Antica Corte Pallavicini where they will dine, spend the night, and prepare their meal. In that order. Before dinner, they wander through a creepy cellar full of hanging hams; Melissa wonders if a serial killer will make an appearance. They have a ham tasting, and Kevin is in hog heaven. 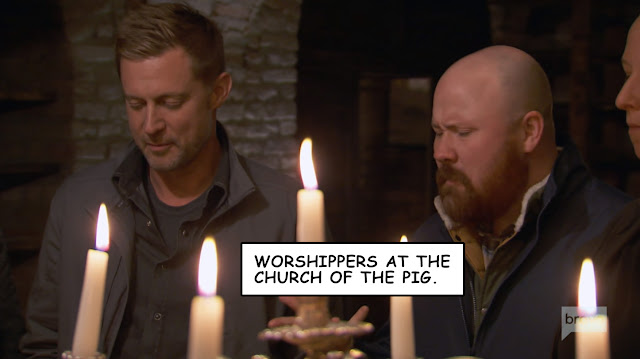 We seem him close his eyes in ecstasy, make that swishing movement with his mouth as if he was tasting wine, and have a porkgasm right on the spot. But the tasting is just foreplay for the main meal, a multi-course dinner during which the cheftestants do the inevitable musing about their "journey" to that point. God, I hate that word used in that way.

The next day, the chefs hit the kitchen and commence to cookery. Stephanie, despite the admonishment not to cook the prosciutto, decides to use it as a substitute for meat in a ragu. In other words, she uses a shit-ton of the precious ingredient, cuts it into tiny cubes, and cooks the hell out of it. For her second dish, she's putting slices of prosciutto within cuts in her cabbage and braising the whole thing. Again, defying the recommendation that she not cook the meat. Daring and perhaps dumb, but she's feeling confident. Melissa, too, is working with the prosciutto in an unconventional manner by using it in her XO sauce. She's working the parm into her primi as a flavoring element for her brodo. She's also using the French technique of making a raft--a mixture of coagulated egg and other ingredients that floats on top of and draws impurities out of a stock--in order to clarify it. It's a fiddly thing to do; she accidentally allows the raft to break, so she has to start over.

On the boys' side of the room, they're going in the opposite direction by barely draping the required porcine product over their dishes. Kevin found some pork at the market and is just tickled with his plan to make pork with pork on top. He's using the borlotti beans to make a pasta i fagioli with a Parmesan garnish added at the table. Bryan is making pasta alla chitarra which he will top with an egg and a nasty foamed up version of Parmesan fonduta that looks like marshmallow fluff. Mr Technique is also doing bass draped with prosciutto on top of a pumpkin seed pesto.

Prosecco Padma et al enter the dining room. Apparently the chefs gathered were the recipients of a collective 16 Michelin stars. Most are Italian natives, excluding California chef Evan Funke. His Italian accent is nonexistent but he is a master of pasta. It's a tough crowd.

The girls present first and leave elated. Despite cooking the prosciutto, Stephanie gets raves for both her pasta and the sauce which was well-balanced with both ham and cheese. Melissa's use of Parmesan rind in her brodo along with the Asian flavor of yuzu created something that had great depth of flavor. Then the boys get kicked in the head. Kevin's bean stew is fine, but the tablespoon of parm he adds at the table makes the dish too salty. And Bryan's pasta is good, but the judges don't like his aerated parm fonduta. I mean, they really hate it. Possibly because they expected to taste marshmallow fluff. 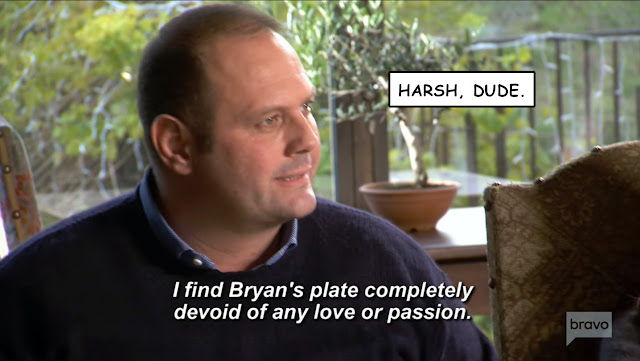 Both Stephanie and Melissa are praised for their secondi, braised cabbage with fonduta and scallop with XO and radicchio, respectively. Kevin's dish, however, is "not so good-a" because his pork is tough and the drape of prosciutto seems more like an afterthought. Bryan basically treated the ham the same way, but it's his pesto that gets slammed. Apparently it doesn't work-a well with the other ingredients. 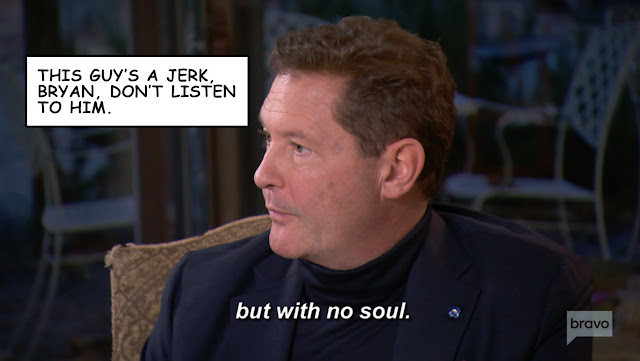 Bryan should probably change his last name to something far less ethnic, cuz his Italian card just got revoked.

Judges' Table is pretty predictable. Evan Funke joins Pads, Tom, and Gail for the party and they roundly praise both Stephanie and Melissa. Stephanie points to herself, "me?" 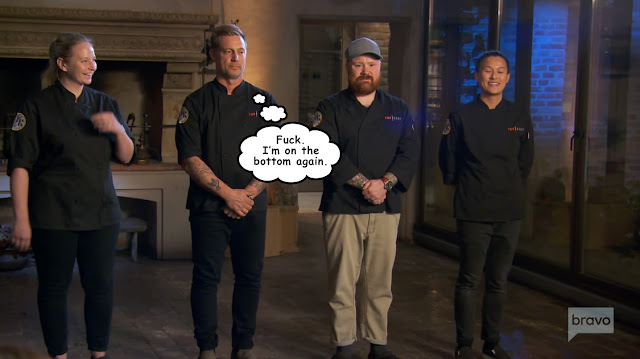 She's surprised that she is going on to the finale, though Melissa is actually the winner of this challenge. That means the boys are on the bottom. Bryan's dishes may not have had soul, but at least the pasta he made was the best of the evening. Kevin isn't so lucky. His pork "ate tough" and was overseared, his raviolo was too salty, and the ingredient he was supposed to feature--the prosciutto--was an afterthought. Kevin thought his cooking was soulful, and maybe it had more soul than Bryan's, but the technical flaws were enough to send him home. 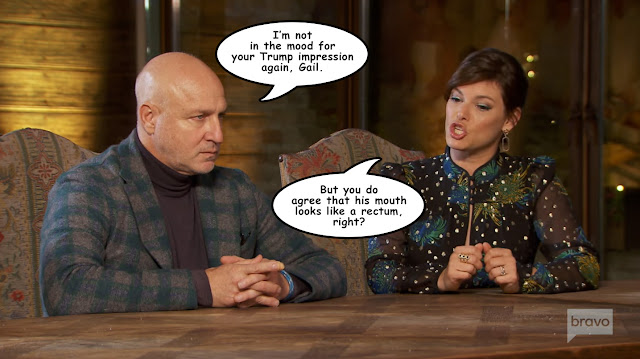 I'm happy that Bryan gets to go on to the finale, but I had hoped he'd get there on his own merit, rather than slipping through because someone else's food was worse than his. I'm sure he feels the same way.

Next week: the cheftestants will need to cook the best 4-course meal of their lives, along with a little help from their friends Kevin, Malarkey, and LeeAnne. Looks like Bryan is getting an advantage working with Kevin. Will opinionated LeeAnne sink Melissa, who looks to be the strongest chef in this competition? And how will Stephanie fare paired with Malarkey? Stay tuned!