I'm not sure what I'm going to do when Top Chef is done and I'll have to remember what week it is on my own. Six weeks ago I made steak for dinner in hopeful celebration of the mid-point of quarantine. (Yes, I know we're not technically in quarantine. It's just easier to say/type than "stay-at-home.") Six weeks later, we're still in the thick of it, despite states (including my own--Maryland) lifting restrictions on dining out and getting haircuts and tattoos. The first wave isn't over, people. We don't need to start a second one so soon. Hey, but there are 6000 open ICU beds in the state, so go on and have fun! You deserve it!

This week on Top Chef--a much happier and less-contentious place than the world in which we currently live--the Final Five go abroad to do more cooking. They pack their bags, say "arrivederci" to the Top Chef Mansion, and head to the airport. We see them checking in and dining in the first class lounge, which seems extravagant. So much so that Kevin wonders if Padma and Tom are supposed to be there but got stuck flying "Jet Malarkey." While lounging in their first class seats-that-become-beds, the chefs are served what appears to be real food, judging by the steak on Kevin's plate. They probably drink a whole lot, too. 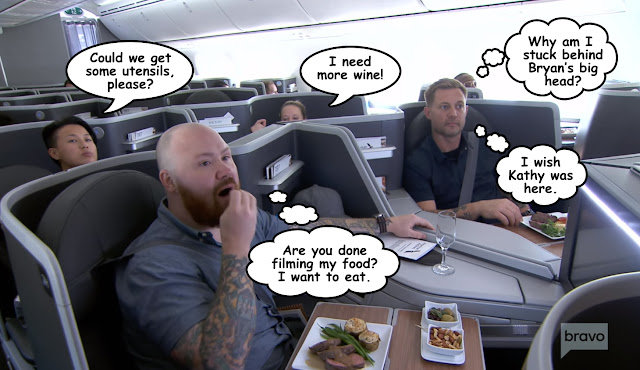 We don't get to see our weary cheftestants going through customs in Rome. (I presume that one of the pre-show requirements is to have valid passports, likely snatched up by the producers on the first day of filming.) but we do see them traveling the 3+ hours to their home-away-from-home in Tuscany, the Renaissance Tuscany Il Ciocco Resort & Spa in Castelvecchio Pascoli. Sign me up for that spa, baby! After spending nearly three months using my dining room table as a desk, my back and shoulders are killing me. The scenery on the way there is so beautiful. Who wants to run away to Tuscany with me? Bryan?

Before the cheftestants head to beddy-bye, they find a note from Padma reminding them that it's not all fun and games. The next day they'll be expected to meet her in Lucca, an ancient city in the northwest of Tuscany.

True to her word, Padma has materialized in Lucca with Filippo Saporito of Michelin-starred La Leggenda dei Frati. (I can skip this place when we go to Tuscany; I'm not wealthy enough to enjoy a menu of chicken liver terrine, beef tartare, maccheroni, lamb, and zuccotto for €115.) Champagne Padma announces that she's ready for Happy Hour and the cheftestants are all for it. Prosecco Padma goes on to say that in Italy, there's a tradition called "aperitivo." Saporito offers that aperitivo snacks should be small and eaten with one hand, so the other hand can hold onto a beer. Only he said it with a heavy Italian accent. Fortunately for the cheftestants, Prosecco Padma speaks fluent Italian. Fortunately for us, there were subtitles.

The Quickfire Challenge is to make aperitivo schnacks using Peroni beer for 30 locals plus Pads and Fil in 45 minutes. Oh, and they have to use workstations that contain only foods particular to one of five regions of Italy. Believe it or not, folks, there's more to Italian food than lasagne, pizza, and sketti and meatballs (which aren't even eaten together there)! It looks cold in Lucca, as it's probably mid-to-late October at this point, but the chefs are still going to cook outdoors. They are possibly jet-lagged, but Asti Spumante Padma demands to be fed so they must comply. Plus, there's a 10K prize on the line for the winner. 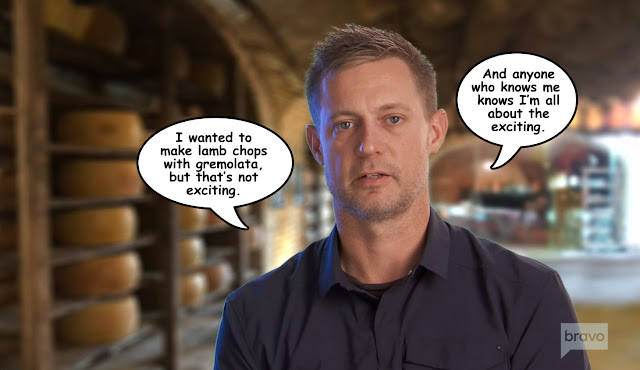 Bryan needs to win a Quickfire, but right off the bat things go wrong. He decides that his original idea of lamb chops with gremolata is a bore, but then he can't find breadcrumbs for scalloppine, either. With time running out, he opts for tartare, which isn't a familiar dish for his region. 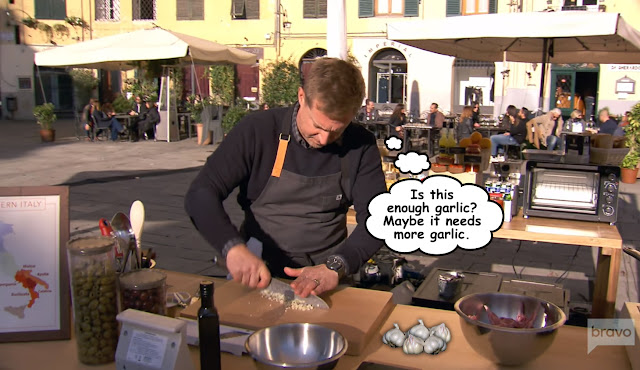 I'm not sure how he incorporated enough beer into the dish, but considering he hasn't paid attention to the QF directions all season, he wasn't about to start now. Annnnndddd....of course he ends up on the bottom. He's used far too much raw garlic, which Fil says is not good for talking with friends. Stephanie's odd venison and gorgonzola en carozza (essentially Italian grilled cheese) is tough, putting her on the bottom as well. But Fil and Pads like Melissa's mussels, Gregory's cuttlefish, and Kevin's polenta with prosciutto and radicchio agrodolce. Kevin is declared the ultimate winner and in about a year will receive a check for 10K from Peroni.

Tom and his hat then saunter into camera range. Together, he and Franchiacorta Padma announce the Elimination Challenge. The cheftestants will be able to cook any dishes their heart desires--for 100 guests at a Tuscan Food Festival--as long as they use white truffles. But first: they're going truffle hunting with people from Savini Truffles and two very cute doggos.

The dogs are relentless hunters of the fragrant tuber, which unlike black truffles, are much better when eaten raw. After observing the dogs unearth thousands of euros worth of fungus, the chefs are sent to Il Alimento Totale to do their shopping. Shopping in Italy is apparently difficult if Lambrusco Padma is not around to translate. Which she isn't. She's probably sippin' the bub somewhere.

The next day, the chefs head into the kitchen at L'Imbuto for three hours of food prep. Stephanie, who originally planned to make egg drop soup, has switched to pasta. She makes a radicchio sauce to go with and finds that it just tastes gross. 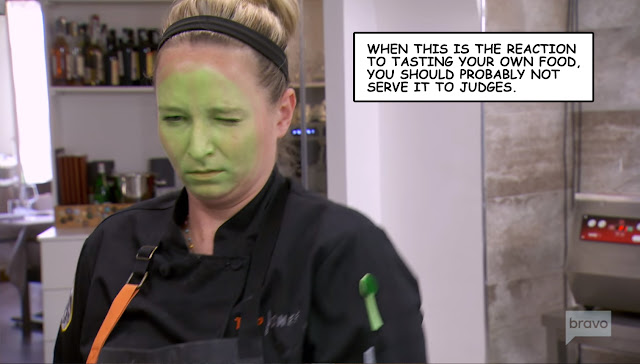 Rather than toss it, she puts in a ton of butter and hopes for the best. Kevin finds that he's picked up wild boar in addition to pork and veal for his meatballs. Curse those poor foreign language skills! (The only foreign language skills I have involve food terms. Cinghiale is the Italian word for boar. Doesn't everyone know that?) Gregory is struggling with back pain and has had a couple of shots (lemoncello? sambuca?) to help deal with it. They will all Make It Work. (Wait - that's Project Runway....) Melissa cleverly combines Asian and Italian elements in a congee dish, and Bryan is doing veal with potatoes.

After prep, they pack up their foodstuffs and head to the festival site. As they're finishing the cooking, Brachetto d'Acqui Padma, Gail, Tom, Chef Cristiano Tomei of L'Imbuto, and truffle dude Cristiano Savini arrive to taste. They feel that the spicing of Kevin's meatballs competes too much with the truffles. Though Stephanie used tiny dollops of her bitter radicchio glop, it was still too much. But they do like her pasta. Gregory's wild boar stew is great, but despite lashings of truffle shavings, their delicate flavor disappears. Melissa's congee with fried garlic and salami pleased the judges, though they'd dump the cold cuts. Bryan's truffled potatoes--dispensed from a whipped cream canister--offer the purest truffle flavor of all.

As for the bottom three, the judges have a hard time deciding who should go home. All three dishes were good, but all had issues. Stephanie's pasta is good enough to keep her safe, but Kevin's and Gregory's dishes didn't allow the truffle to sing.

Gregory goes home. He says that he gave 110% to the competition. Perhaps he should have kept it at 100%.

Next week, which is the penultimate episode and not the final: Bryan wrestles with a giant wheel of Parmesan cheese--and wins! Wins the battle with the cheese....